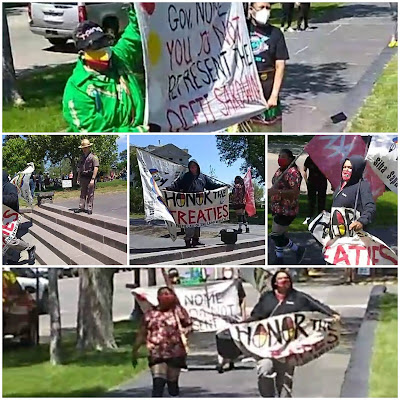 Lakotas disrupt South Dakota Gov. Kristi Noem's powwow at the Capitol today --  holding her responsible for COVID-19 deaths, attempts to dismantle tribal sovereignty, strangling free speech and lawful protests, and squandering CARES Act funds.
By Brenda Norrell
Censored News
PIERRE, South Dakota -- Calling her a trickster, Lakotas called out Kristi Noem for "killing grandmothers and grandfathers," today, after the South Dakota governor blocked virus protection efforts.
Over a loud speaker, Lakotas blasted, "Kristi Noem is no friend of Native People."
As pale police pushed them back from the Capitol during the round dance, Lakotas called out, "You're dancing for racism." 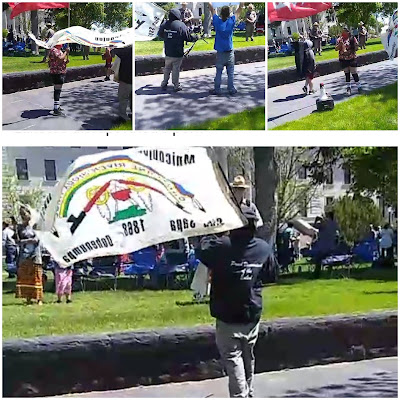 Watch video at 2KC Media on Facebook https://m.facebook.com/2KCMedia/
The Trickster's Roundance:  Calling out the trickster at the coyote's round dance today, Lakotas held Kristi Noem responsible for the deaths of grandparents, and fighting efforts to protect the people.
The South Dakota governor fought tribal police checkpoints, and promoted the Sturgis bike rally at a time when people were dying during the pandemic.
Now wasting more of Lakotas' time, money and resources in legal battles, Noem is battling Lakotas to have her fireworks party in the Black Hills.
Today 2KC Media said she is responsible for cultural genocide.
The round dance was a symbol of the grief, loss and the circle of pain for Lakotas battling the Trickster Noem, and her attempts to further militarize police to fight lawful protests, while she attempts to blanket South Dakota in white supremacy. 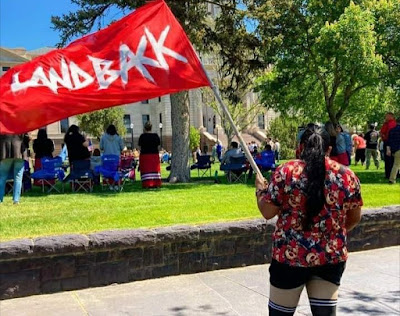 Statement by 2KC Media today, at the State Capitol in Pierre, South Dakota:
"We are here today in so called peirre, sd Oceti Sakowin, Turtle Island at so-called governor Kristy Noem's powwow intended to fool the people.
Kristy Noem is a trickster weaving her web of deceit. She is not a friend of the tribes. She uses lies to play the people. She uses lies to prey on the people and the land. She causes division and lateral violence.
She is in a lawsuit against the Biden administration to bring back KXL, enemy of the tribe. She has created riot boosting laws and is building a new national guard center to handle any opposition.
She is currently suing Deb Haaland for not allowing her fireworks in the black hills, He Sapa. The people made it clear last year, but she didn't listen, and pulled the national guard out.
She is also involved in a state lawsuit against the people's decision on recreational marijuana.
While she complains about 50 permanent jobs lost with KXL, she is denying the opportunity for thousands of green, permanent jobs.
While she claimed, "We don't need handouts," she handed out $100,000 to her family members from Cares Act money. She has used taxpayer money to campaign all over for trump.
She has passed legislation against the two spirit community.
She did nothing to stop the spread of covid and brought a lot in by allowing Sturgis. Native populations were proportionately hit worse by these decisions. When checkpoints were set up for tribal safety she tried her best to shut them down.
She is also backing legislation to ensure history classes in school teach about her America -- instead of the truth.
She tries to hide these acts of cultural genocide behind this phony powwow.
We are armed with the truth and prayer!
Wake up America!"
-- 2KC Media 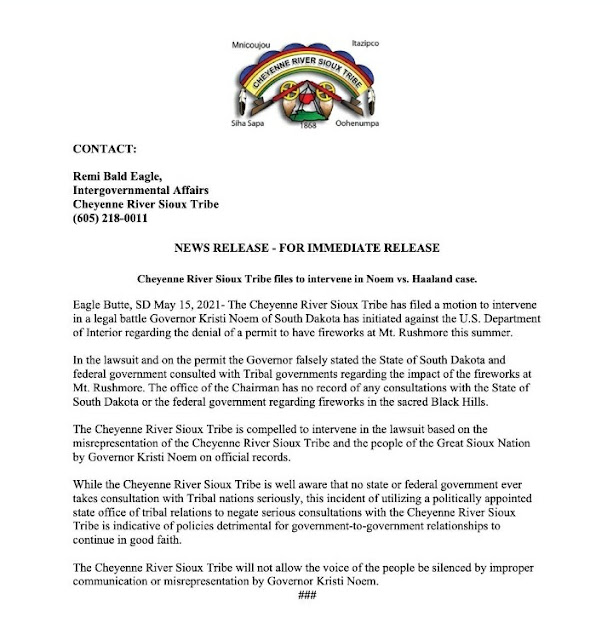 (Above) Statement of Cheyenne River Lakota Nation. Cheyenne River Lakota joined in a lawsuit stating Noem never consulted the tribe about her plan for  fireworks in the Black Hills.
Big Fire Law and Policy Group is representing the tribe.
Law 360 reported this week, "South Dakota's legal battle with the Department of Interior over a July Fourth fireworks display at Mount Rushmore has reignited legal tensions between Gov. Kristi Noem and the Cheyenne River Sioux Tribe."
"The Governor sued the Department of Interior last month after the Park Service denied the state's application for the event, citing safety concerns and objections from local Native American tribes."
"The Tribe has requested to join the lawsuit to protect the right of Lakota people to freely exercise their religion in the Black Hills, their most sacred site."
https://www.law360.com/articles/1385096/tribe-fights-to-intervene-in-mt-rushmore-fireworks-row
at May 20, 2021