People vs. Fossil Fuels Mobilization Concludes with Youth-Led Civil Disobedience at the Capitol; 90 Arrested At Capitol; Total Arrests at 655 for the Week
More than 650 People Arrested During This Week’s “People Vs. Fossil Fuels” Mobilization Demanding Urgent Action to Stop New Fossil Fuel Projects

WASHINGTON — Under a banner declaring “We did not vote for fossil fuels,” Indigenous and youth climate activists led a march to the Capitol today for a mass civil disobedience action, demanding Congress and the Biden Administration take urgent action to stop all new fossil fuel projects and launch a just renewable energy revolution. 90 people were arrested on the fifth and final day of the “People vs. Fossil Fuels” mobilization, bringing the total arrested during the week of action to 655.
Throughout four days of action at the White House, the “People vs. Fossil Fuels” mobilization pressed President Biden to stop approving new fossil fuel projects and declare a climate emergency to equitably deploy clean, renewable energy solutions and deliver on his commitments to climate and environmental justice and Indigenous rights. The call to action was extended to Congress today, with demonstrators urging elected officials to listen to the people who sent them to Washington and take urgent action to support the phase out of fossil fuels.

“I came here to stand with my people to give voice to future generations,” said 10-year old Love Hopkins of the Standing Rock Youth Council. Hopkins was part of a group of Indigenous youth runners who ran from Standing Rock to Washington, D.C. in 2016 when she was six years old. “For years the US government has been lying and giving false hopes to our First Nations people. We want answers and we want them now. If this is the land of the free and the land of opportunity, why can’t we have that? Why can’t we have clean drinking water?”

As negotiations around the infrastructure bill drag on, the President has allowed dangerous fossil fuel projects to advance and passed the buck to Congress, allowing his agenda to be delayed and weakened by industry-friendly politicians, including those in his own party, like Senators Manchin and Sinema.

“Biden promised, just like they’ve done in the past, to bring us to the table, but where’s our seat? We haven’t been heard, they haven’t listened,” said Isabelle Marie Knife, a 22-year old Indigenous youth leader from the fight against the Line 3 pipeline. “It takes youth to be on the frontlines to make our voices heard. We are the generation that says enough is enough, we will be heard, we will have a seat at the table. They tell us lies, they come on our lands, they promise this, they promise that. Well, I promise you, we’ve got a new generation coming and we’re not stopping.” 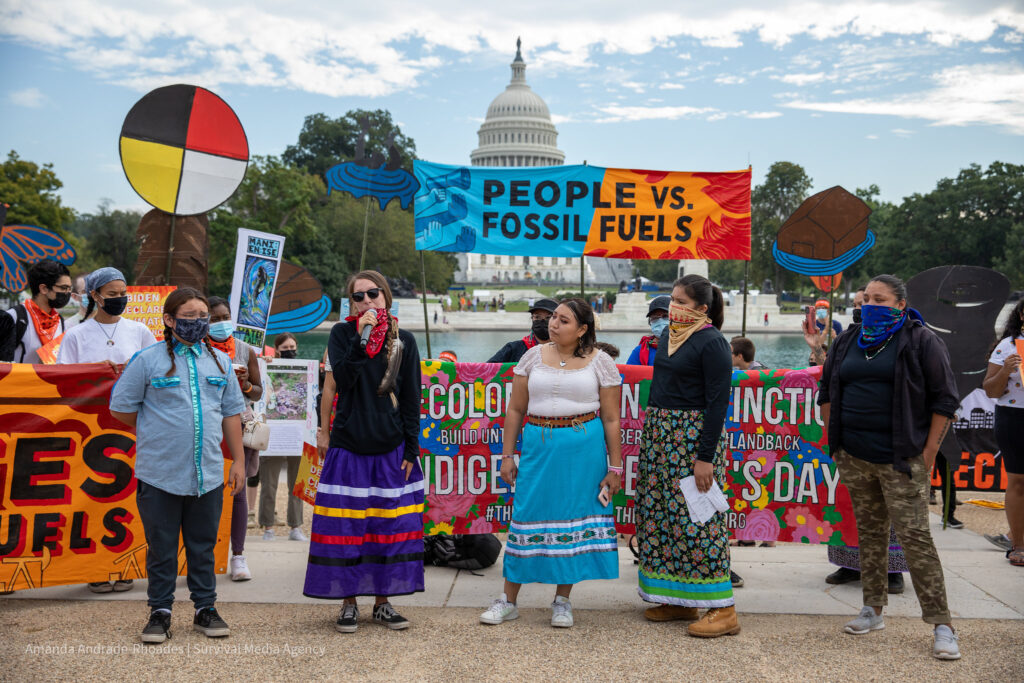 In 2020, Native voters and Youth voters–majorities of whom rank climate action as a top concern–turned out at much higher rates than in 2016, and helped secure Biden’s margin of victory in key places. Analysis indicates that young voters were critical to Biden’s winning margins across the country, including in Arizona, Michigan, Pennsylvania, and beyond. Meanwhile, Native voters heavily backed Biden in swing states like Wisconsin and Arizona. Now, as negotiations around the infrastructure bill drag on in Congress, Indigenous and youth climate organizations are showing an increasing level of frustration with Biden’s inability to deliver on his promise for bold action on climate, fossil fuels, environmental justice, and Indigenous rights. 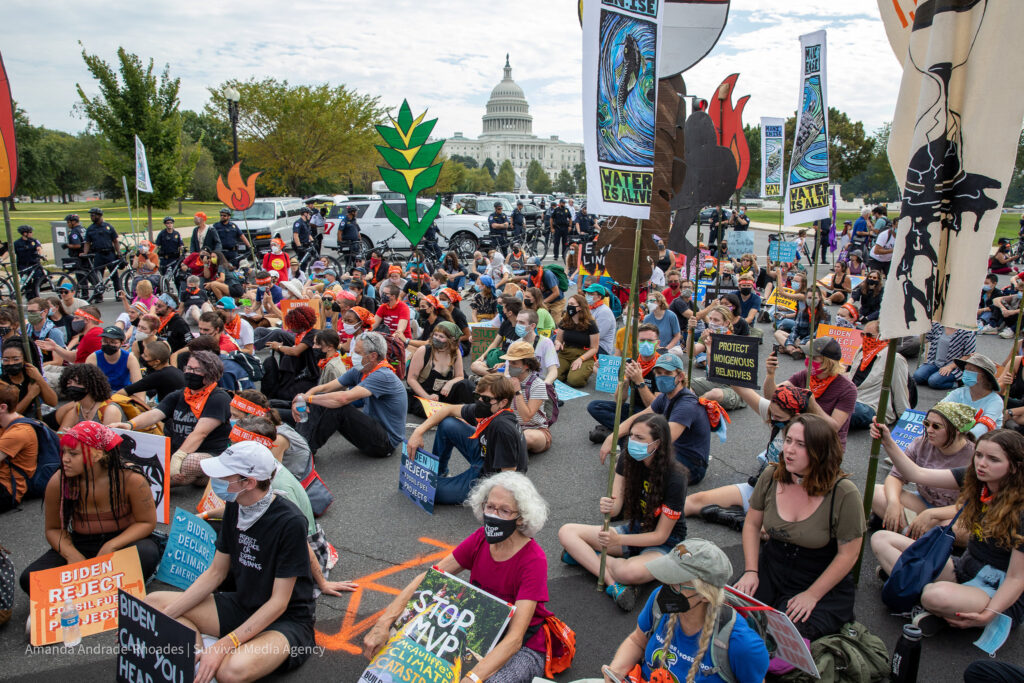 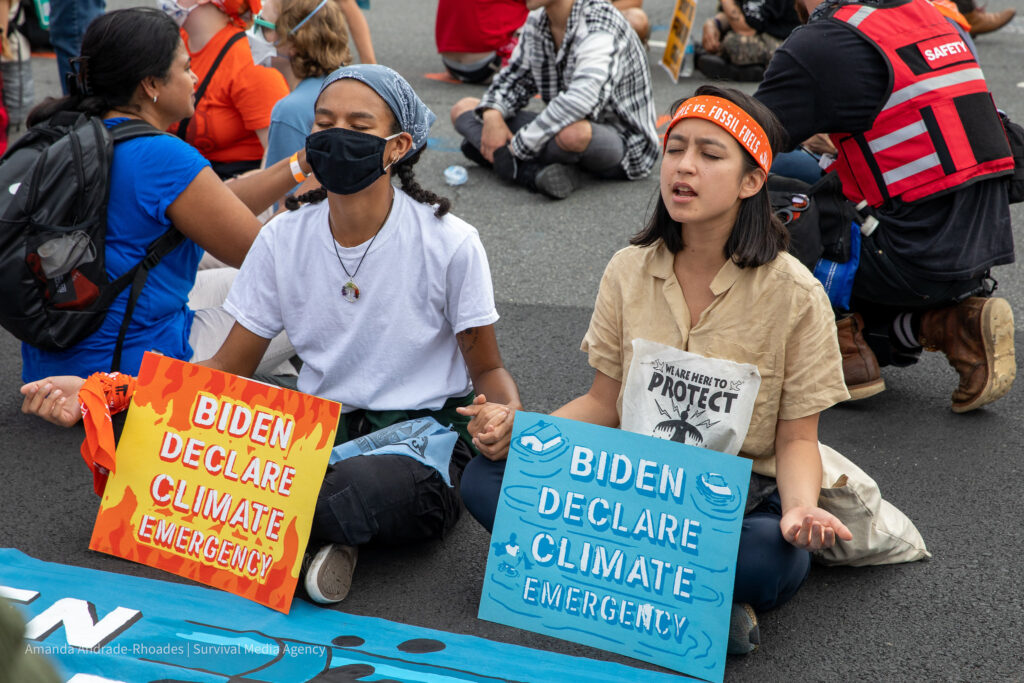 “I entered highschool earlier last month and I am here with other high schoolers. I have met an 8 year old who is here fighting,” said Mingyang Wei, 14-year old youth leader with Sunrise Movement DC. ‘It is a shame that we still have to be here. It is a disgrace. How has this been going on so long? It has been going on because corporate greed has taken priority over the value of people in this country.”

A Historic Week of Action

The “People vs. Fossil Fuels” mobilization was organized by Build Back Fossil Free, a coalition of hundreds of Indigenous, Black, environmental, climate justice, youth, and social justice organizations. This week of action represents the beginning of the coalition’s engagement on these critical issues.

The total arrests for the “People vs. Fossil Fuels” week now totals 655 people, with hundreds of more taking part in marches and rallies each day. After checking with Park Police, organizers have updated numbers for each day for arrests this week: 155 on Monday, 155 on Tuesday, 90 on Wednesday, 130 on Thursday at the White House and 35 at the Bureau of Indian Affairs, and 90 today. Those arrested include Indigenous leaders, faith leaders, climate activists, and people from communities hit hard by the climate crisis and leading fights against new fossil fuel projects. 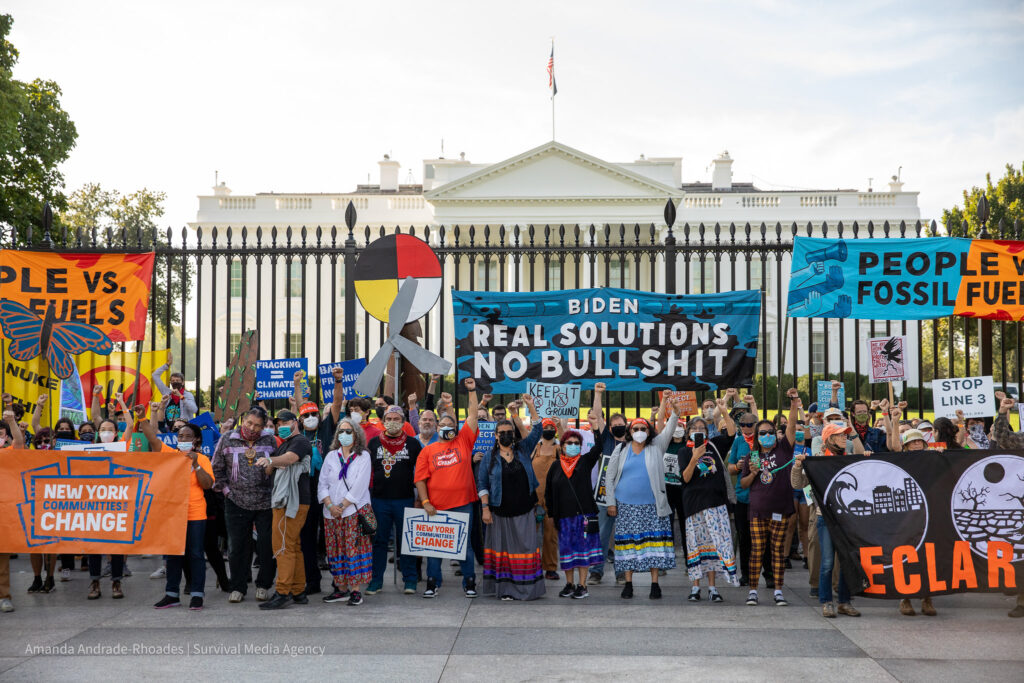 In addition to these mobilizations, over 50 Indigenous activists launched an occupation of the Bureau of Indian Affairs at the Department of Interior on Thursday for the first time since a similar action took place in 1972.

“We will no longer allow the U.S. government to separate us from our relationship to the sacred knowledge of Mother Earth and all who depend on her,” reads a statement released by the Indigenous leaders at the occupation. “Her songs have no end, so we must continue the unfinished work of our ancestors who have walked on before us.” 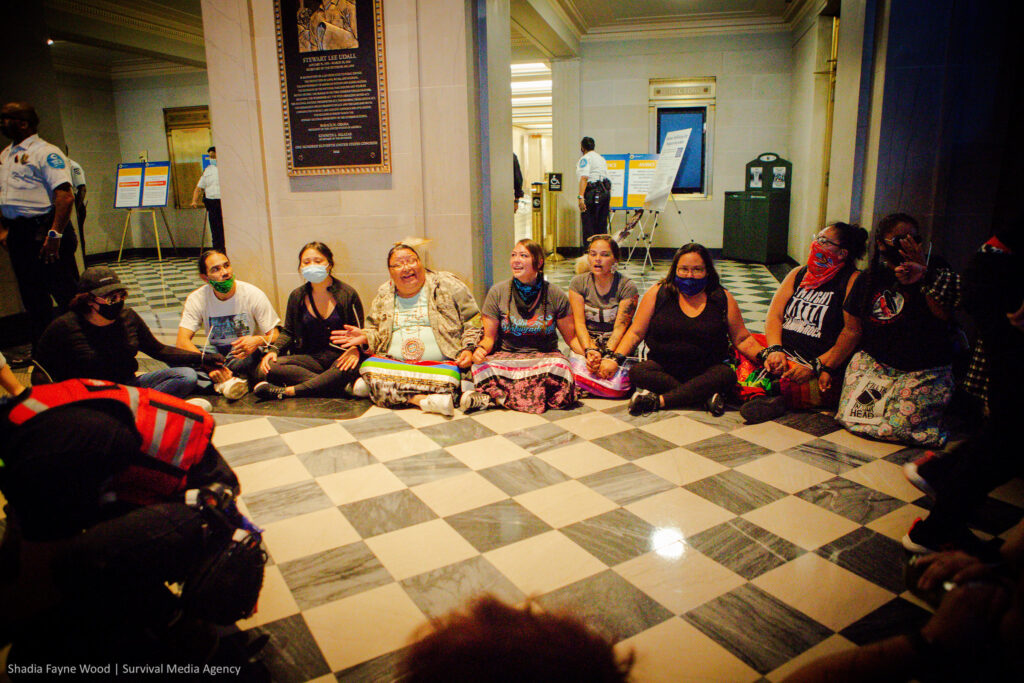 On Thursday, White House Press Secretary Jen Psaki claimed the Administration is “listening” to the advocates who are a part of this action, suggesting the Administration’s climate commitment won’t end following the passage of the pending reconciliation package. However, the Administration has yet to act on looming, dangerous fossil fuel projects that the President could reject right now, including the Mountain Valley Pipeline, the Line 3 pipeline, the Formosa Plastics facility, and many more.

By refusing to stop major fossil fuel projects, President Biden has broken his promises to protect Indigenous rights, prioritize environmental justice, and fully address the climate crisis. New analysis from Oil Change International shows that if the Biden Administration moves ahead with 21 major fossil fuel infrastructure projects that are currently under federal review, it would be the emissions equivalent of adding 316 new coal-fired power plants — more than are currently operating in the United States. The total emissions from just these projects would represent 17% of total US greenhouse gas emissions in 2019.

Future actions and engagement from the Build Back Fossil Free coalition will be announced soon.