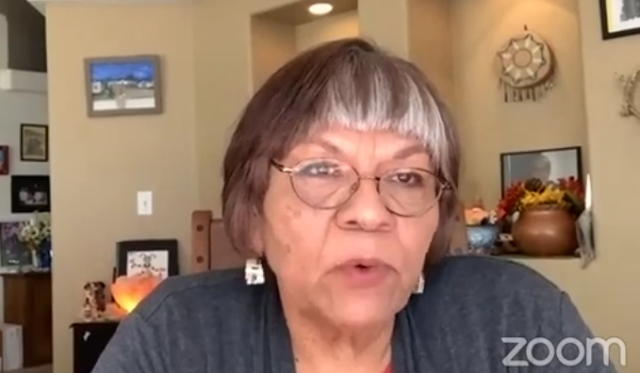 Isleta Chief Judge Verna Teller
"We have all been traumatized for the last 500 years. We all need to heal." 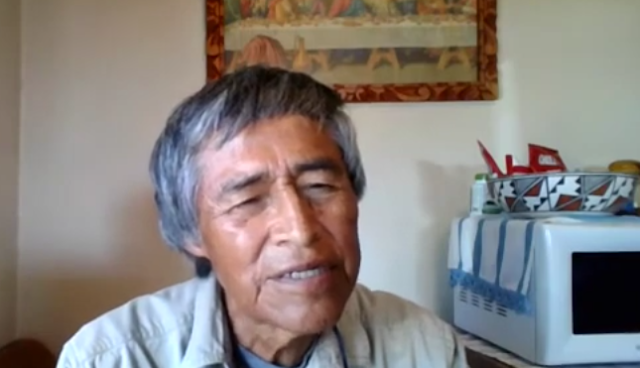 Red Nation's Jennifer Marley, San Ildefonso, talks with Acoma and Isleta elders, beginning with Maurus Chino, Acoma, speaking about efforts to expose the truth about the Spanish Conquistadors and their statues in New Mexico. The severing of the foot of the statue of the Conquistador Oñate was to illustrate the savagery of Oñate, known as The Butcher.

"You have to change yourself," Maurus Chino says of social change during Red Nation's Native Liberation Conference.

Chino explains how Albuquerque newspapers limited coverage of the truth about the Conquistadors and how social media has helped change this.

"Once I started with myself, I can deal with other issues," Chino said of the inner work -- and following this with the struggles for land rights, water rights and resources -- and the work against repression.

As for the word 'Pueblo,' Chino said, "I hate that word."

"We have resisted from the very beginning," Chino said, pointing out that Ceremonies are still closed to the public. Chino discusses how Christianity was forced on the people and urged the people to return to their Ceremonies.

Petuuche Gilbert, Acoma, speaks on his international work with the United Nations, global human rights struggles, and his work at home with the Laguna Acoma Coalition for a Safe Environment.

Gilbert discusses colonization and explains why he changed his name to Petuuche Gilbert to more accurately reflect his true name.

Speaking on self-determination and sovereignty, he discusses the United Nations Declaration on the Rights of Indigenous Peoples and the quest to be free of colonialism.

Isleta Chief Judge Verna Teller speaks of the revolutionary work that needs to keep moving forward, and the need to involve the young people.

"We're here because of our ancestors," Teller said, recalling how the ancestors suffered and how they prayed.

Teller said recently the truth is beginning to come out about the Conquistadors.

Teller speaks on the need for traditional forms of peacemaking instead of the western form of justice.

"The feds have been imposing their form of justice on us."

Pointing out that her people were not relocated, she said, "We're still here."

Describing the resistance, she said her people were clever in the way they protected their traditional Ceremonies.

She said these courageous conversations must continue and include everyone. "Balance is about female and male." She describes matriarchal societies and said ignoring the voice of women results in fragmentation.

Describing their lives of struggle, she compared it to a long Cold War.

"I'm very excited," she said, praising the young people who are stepping up today and taking on the struggles. "We have to pass the baton."

"We need to keep moving forward to protect who we are," Teller said, adding the need to grow healthy food to survive.

"Let's dance. Let's celebrate our harvest," she said, describing the revolutionary celebration of traditional ceremonies and resistance to the false history glorifying Conquistadors and Catholic priests.

Now there is the question of how to cope with climate change and how to assert sovereign water rights in the future. Cultural appropriation must also be dealt with.

Meanwhile, she points out that Albuquerque is at Isleta's backdoor and rapidly expanding.

Teller's message is that with the young people rising up, the people will continue to resist and survive.

"That spirit of resistance is still alive."

Teller resounded the message, "We need to be who we are."

During questions, Teller speaks on the lack of justice at the U.S. Supreme Court for Native Nations.

Responding to questions, Teller urges young people to turn to their elders, with their hearts and spirits.

"It's important to be a good listener."

"We have all been traumatized for the last 500 years. We all need to heal."