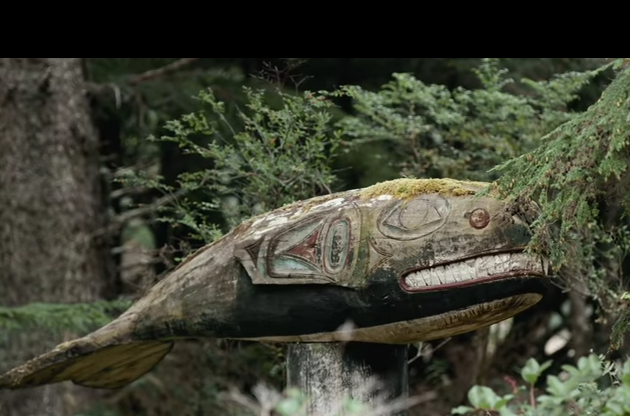 "There was a time when the less greedy you are, and the more you can give, the wealthier you are," said Marina Anderson, Haida, tribal administrator of Kasaan Village, speaking in 'Understory.'
Watch now: https://dceff.org/2021online/
39 minutes
Wild Confluence
Three women set sail on a 350 mile expedition through Alaska’s massive Tongass National Forest, exploring how clearcut logging in this coastal rainforest could affect wildlife, local communities and our planet’s climate. Take action at https://www.LastStands.org - submit a comment and help end the destruction of this coastal rain forest.

Film highlights threats to our nation's largest national forest, which includes 17,000 miles of habitat for the region's wild salmon populations.

SITKA, ALASKA — “Understory: A Journey Through the Tongass” follows a young fisherman, Elsa Sebastian, on a 350-mile coastal expedition of last stands of old-growth temperate rainforest in the Tongass National Forest. Joined by biologist Dr. Natalie Dawson and botanical illustrator Mara Menahan, the three women confront the destruction of clearcut logging and document the wild beauty of an ancient ecosystem, home to salmon spawning habitats.

The nationwide launch of the film, which occurred on December 7th, coincides with the start of a 60-day comment period on the publication of a proposal to repeal the 2020 Alaska Roadless Rule. Through January 22, 2022, all U.S. citizens can participate in the commenting period urging the Biden administration to restore protections to the Tongass.

Read more:
By WECAN International
The Tongass Rainforest of Alaska is the traditional homelands of the Tlingit, Haida and Tsimshian Peoples; the largest national forest in the U.S.; and has been called 'America’s climate forest' due to its unsurpassed ability to sequester carbon and mitigate climate impacts. For decades, the Forest suffered destructive and aggressive clear cut logging that negatively impacted the forest and local Indigenous communities. In 2001, the National Roadless Rule, put an end to clear-cutting in the Tongass, allowing the land to heal. However, since then, the roadless rule and Tongass have been under attack with the Trump Administration successfully repealing forest protections in the Tongass in October 2020.
Earlier this year, the Biden Administration’s USDA announced it's plans to restore full Roadless Rule protections, and end large-scale old growth timber sales across the entire 16 million acres of the Tongass National Forest in Alaska. The announcement comes after many years of advocacy by tribal leadership, and local and national groups, including WECAN. As a part of the restoration process the United States Forest Service is conducting a 60-day comment period on the decisions to reestablish 2001 Roadless Rule protections on the Tongass National Forest. We need to show up in full force to ensure that these protections remain and the forest stays standing!
Take Action https://www.wecaninternational.org/take-action-tongass
at December 21, 2021