Most Censored in Indian Country 2021 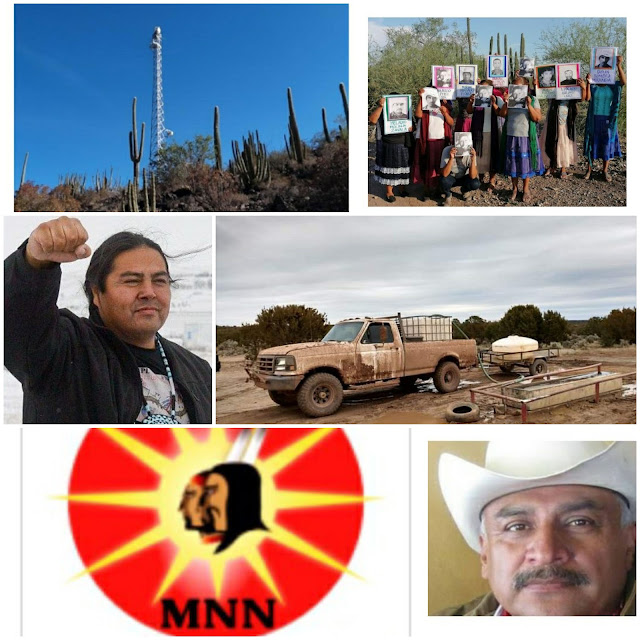 Most Censored in Indian Country 2021

The most censored issues in Indian country in 2021 include the death of Paiute Shoshone Journalist Myron Dewey; the kidnappings and assassinations of Yaqui in Sonora; the Mohawk Mothers demand for the search for residential school childrens' graves at a former CIA torture research site in Montreal; the failure of the Navajo Nation to distribute $2 billion in federal virus relief to Dine' in desperate need; and the destruction of O'odham sacred places on the Tohono O'odham Nation by Israel's Elbit Systems for the construction of spy towers for use by the U.S. Border Patrol.

Dewey became known around the world during the resistance to the Dakota Access Pipeline in Standing Rock, as a journalist and drone operator. On the day before his death, in his Paiute and Shoshone homeland, Dewey live streamed at the Navy's bombing range at Fallon, Nevada. 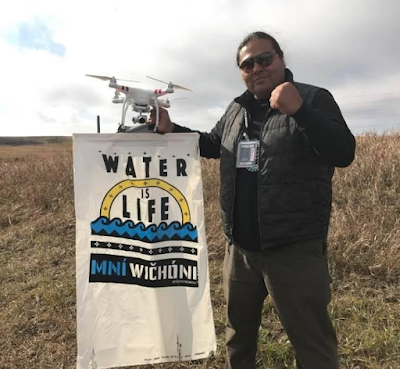 "I am a survivor of a mass genocide across the United States."
Pointing out that genocide is being carried out around the world, he said, "In Nevada it is still fresh."

Dewey also drew attention to the lithium mining targeting Thacker Pass in northern Nevada at a Paiute Massacre Site. At the time of his death, a secret deal was underway for new lithium mining in Nye County where he died. Lithium is among the false green solutions, needed for electric cars, which corporations are rushing to profiteer from.

On October 21, after publishing an article detailing the police reports of the vehicle crash that resulted in the death of Dewey, Facebook locked the Censored News publisher out of her account. The Facebook account remains locked.

Mohawk Mothers are demanding that unmarked graves of residential school children be protected at McGill University, home to the psychiatric hospital Allan Memorial Institute in Montreal, Canada -- operated by the Canadian government and the US CIA.

Mohawk and other residential school students were victims of horrific torture and mind control studies.

The torture, abuse and murder of children in residential schools in Canada and boarding schools in the United States continues to be among the most censored issues in Indian country.

Thirteen years ago, Russell Means, Lakota, and Kevin Annett, released this list of unmarked graves at residential schools, in 2008.

Censored News republished the list in 2021 as graves were located.

The list has been updated and includes the testimony of numerous survivors, who as children were victims of electric chairs and rape, and witnessed children thrown out of windows and plummeting to their deaths, in the schools.

Native children with tuberculosis were in rooms with well children in order to spread the disease. Many children starved to death or with used in medical experiments. Children who ran away often died trying to make it home. If they were captured and returned to these prison schools, they were beaten, tortured and jailed in basements in solitary confinement.

Canada created a law, mandating the kidnapping of Native children who were then incarcerated in residential schools. The schools were operated by the Catholic Church, other churches, and the Canadian government.

Location of Unmarked Graves Published in 2008 at Censored News: 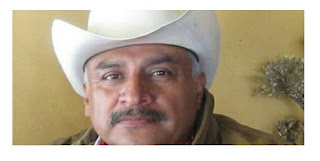 Tomas Rojo, Yaqui water rights leader in Vicam Pueblo, Sonora, Mexico, in the original Yaqui homeland, was kidnapped in May and brutally assassinated.

Despite ongoing kidnappings and assassinations of Yaqui south of the Arizona border, there has been little support or media coverage from north of the border.

The kidnapping of 10 Yaqui Traditional Guards of Bacum Pueblo, south of the Arizona border in the original homelands of the Yoeme (Yaqui), was among the most censored in 2021.

Families said the Mexican military planted drugs in their community in an attempt to disarm the traditional guard. Then, 10 of the men were kidnapped when they went to get a cow for a traditional feast.

Families said the location of remains by the Mexican government is not credible.

Bacum Yaqui have waged a lengthy battle against a gas pipeline.

The Mexican President evicted the families of the kidnapped men from the gathering revealing his 'Justice Plan.'

The Navajo Nation government -- Navajo Council and President -- has failed to distribute the $2.1 billion in federal virus relief funds to Dine', that was received from the American Rescue Plan in May of 2021.

Dine' volunteers continue to raise their own funds and distribute water and food to isolated elderly, and those too weak and sick to haul water and travel for groceries.

As the year 2021 comes to a close, isolated Dine' in the 110 chapters in Arizona, New Mexico and Utah, are in need of water, food and home health care. The coronavirus recently spread, with up to 100 new cases each day.

Dine' volunteer Bitahnii Wilson said, "K'e Native Action received a call to deliver to two different households that are infected with Covid-19 and have to remain in quarantine they requested for emergency food assistance. The Baha’i Local Spiritual Assembly of Gallup has purchased the food for these two  families and we gathered it all up and delivered it to these two families. Thank You all for your donations for the food and much needed cleaning supplies." Bitahnni, family and friends delivered new water barrels filled with water to Navajo and Hopi during 2021.
Meanwhile, the Navajo Nation government invested in more mining -- while there was uncontrollable spread of the coronavirus in 38 Navajo communities in November. Dine' were in desperate need of running water.

The media failed to report, and advise, Navajo and other residents of the constant spread of coronavirus in the bordertown of Farmington, and San Juan County, New Mexico. Throughout the fall of 2021, the virus spread through nursing homes, schools and businesses.

In the bordertown of Gallup in McKinley County, New Mexico, the media was silent about the spread of COVID19 among employees at Walmart, and in schools, eateries and building supply stores during 2021.

The states of Arizona and Utah, where the Navajo Nation is also located, does not list daily updates of coronavirus cases. The New Mexico State data is at: https://www.env.nm.gov/rapid-response-data/ 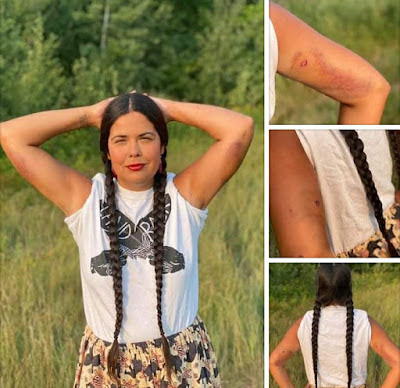 "People were shot in their faces. I saw a young woman's head get split open right in front of me," Houska said.

During the brutal arrests, Sheriffs deputies shoved and smashed Water Protectors faces down into the dirt. At least 20 Indigenous water protectors were arrested in Minnesota over the weekend during protests against the Enbridge Line 3 pipeline.

"The level of brutality that was unleashed on us was very extreme," Houska said.

COP26 -- Infested with Oil and Mining Companies -- Floundered in Scotland

In 2021, mining corporations in Canada and Australia led the attacks targeting Native ancestral lands in the United States.

San Carlos Apache maintain their resistance to Resolution Copper's plan to desecrate Ceremonial land at Oak Flat with a copper mine in Arizona. The federal courts continue to fail to protect sacred lands from mining.

Western Shoshone Ian Zabarte describes how the United States has failed to honor the Treaty of Ruby Valley, as ancestral lands at Yucca Mountain continue to be targeted for nuclear dumping, in this long cycle of nuclear holocaust and atomic bombing, in what is called Nevada.

Lithium mining requires vast amounts of water and is destroying pristine regions of plant and animal habitat globally. The demand for lithium for batteries for electric cars is a false green solution, resulting in a rush for corporate profiteering.

Paiute Shoshone Myron Dewey Killed in Head-on Collision
While Paiute Shoshone Myron Dewey livestreamed from the bombing range of his childhood homeland in Yomba, in the Nevada desert on Saturday, September 25 -- the day before he died in a car collision on Sunday -- people around the world were reading of another exposure of the military in the Nevada desert.
It was the fact that Wikileaks founder Julian Assange was targeted for kidnapping, and possibly assassination, by the CIA. Wikileaks exposed the fact that drone pilots at Creech Airforce Base in the Nevada desert had their fingers on the kill trigger, and were assassinating people around the world, without trial or jury, including children and news reporters, in reckless assassinations based on failed military intelligence.
Read the article at Censored News:
https://bsnorrell.blogspot.com/2021/09/paiute-shoshone-filmmaker-myron-dewey.html
Torture experiments at Allan Memorial Institute, Montreal

Wikipedia: Project MKUltra (or MK-Ultra) was the code name of an illegal human experimentation program designed and undertaken by the U.S. Central Intelligence Agency (CIA).[1][2][3] The experiments were intended to develop procedures and identify drugs such as LSD that could be used in interrogations to weaken individuals and force confessions through brainwashing and psychological torture. MKUltra used numerous methods to manipulate its subjects' mental states and brain functions, such as the covert administration of high doses of psychoactive drugs (especially LSD) and other chemicals, electroshocks,[4] hypnosis,[5][6] sensory deprivation, isolation, and verbal and sexual abuse, in addition to other forms of torture.[7][8]

MKUltra was preceded by two drug-related experiments, Project Bluebird and Project Artichoke.[9][10] It began in 1953, was reduced in scope in 1964 and 1967, and was halted in 1973. It was organized through the CIA's Office of Scientific Intelligence and coordinated with the United States Army Biological Warfare Laboratories.[11] The program engaged in illegal activities,[12][13][14] including the use of U.S. and Canadian citizens as unwitting test subjects.[12]: 74 [15][16][17] MKUltra's scope was broad, with activities carried out under the guise of research at more than 80 institutions, including colleges and universities, hospitals, prisons, and pharmaceutical companies.[18] The CIA operated using front organizations, although some top officials at these institutions were aware of the CIA's involvement.[19]
https://en.wikipedia.org/wiki/Project_MKUltra
Montreal Gazette: The search for unmarked graves at McGill University, home to Allan Memorial Institute torture research:
https://montrealgazette.com/news/local-news/mcgills-royal-vic-plans-prompt-call-to-check-for-unmarked-graves
Grave Robbers and Thieves: Elbit Systems Spy Towers on Tohono O'odham Nation by Ofelia Rivas
https://bsnorrell.blogspot.com/2020/11/grave-robbers-and-thieves.html
Yaqui Tomas Rojo Assassinated
https://bsnorrell.blogspot.com/2021/06/yaqui-water-rights-defender.html
About the author

Brenda Norrell has been a reporter in Indian country for 39 years, beginning as a reporter at the Navajo Times during the 18 years that she lived on the Navajo Nation. She served as a correspondent for Associated Press and USA Today, covering federal courts and the Navajo Nation. After serving as a longtime staff reporter for Indian Country Today covering the Southwest, she was censored and terminated in 2006. She created Censored News to reveal what is being censored.

Norrell has a masters degree in international health, focused on infectious diseases, water and nutrition.

After creating Censored News, Norrell traveled with the Zapatistas in Mexico, broadcast live on the Longest Walk in 2008 from coast to coast for five months, covered the Mother Earth Conference in Bolivia in 2010, live streamed the Boarding School and Indigenous Peoples Summits from Oneida, Wisconsin, and reported from the southern border region.

Now in in 15th year, Censored News has no ads, grants, salaries or revenues, and is a collective of writers, photographers, broadcasters and translators who work without pay.

Article copyright Brenda Norrell, Censored News, may not be republished or used in any manner without permission. brendanorrell@gmail.com