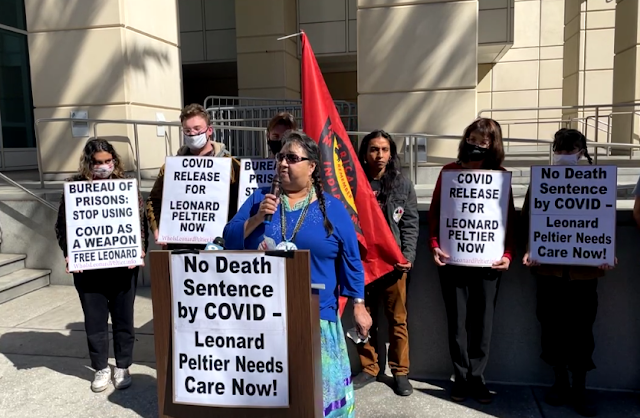 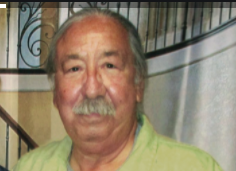 Native political prisoner Leonard Peltier, who has been in U.S. federal prison for 46 years despite worldwide calls for his freedom, tested positive for COVID on Friday, Jan. 28.

Carol Gokee and Jean Roach, co-directors of the International Leonard Peltier Defense Committee (ILPDC) are hosting a press conference on Monday, Jan. 31 at 1:00 pm in Tampa to expose the failure of the Bureau of Prisons (BOP) to follow CDC guidelines and COVID guidelines issued by former Attorney General William Barr.

At 77 years old with severe health problems, Leonard Peltier is at great risk. Supporters are demanding his immediate transfer to a hospital to prevent complications that could endanger his life. He has diabetes, an aortic aneurysm, untreated kidney disease, and high blood pressure. He also had open-heart surgery recently.

Despite the extremely high transmissibility of the Omicron variant, the BOP had not provided booster shots to the prisoners at the Coleman I penitentiary, particularly to the Elders Unit, where Mr. Peltier is imprisoned.

“We are calling for Leonard to be transferred to a hospital immediately. He waited all day from 8:00 am on Friday when he told the authorities he was sick. He was not tested for hours. It was only at 7:00 pm that he was told the test result was positive,” says Gokee.

Roach says, “It is unconscionable that Leonard Peltier and the other prisoners were not given the booster shot. We demand that he be provided hospitalization to assure a higher chance of survival and recovery. Despite his eligibility for COVID release due to the pandemic, we are alarmed that he could face a death sentence by the BOP’s negligence. Leonard Peltier needs to be hospitalized, not just isolated in the prison.”

There is a growing chorus of voices calling on President Biden to free Mr. Peltier. On January 26, Brian Schatz, (D-Hawaii) Chair of the Senate Indian Affairs Committee, wrote to President Biden, saying in part, “I write to urge you to grant a commutation of Leonard Peltier’s sentence.”

James H. Reynolds, who was the prosecutor at Mr. Peltier’s trial, wrote Biden on July 9, 2021, “I write today from a position rare for a former prosecutor: to beseech you to commute the sentence of a man who I helped put behind bars. … I have realized that the prosecution and continued incarceration of Mr. Peltier was and is unjust.”

A national Change.org petition is calling for Leonard Peltier’s hospitalization and freedom:

How sadly appropriate that the warrior Mr. Peltier should be thrust to the forefront yet again of egregious government negligence and injustice, this time at the hands of the BOP. Thanks for posting. Action is prayer. Do the right thing, President Biden.