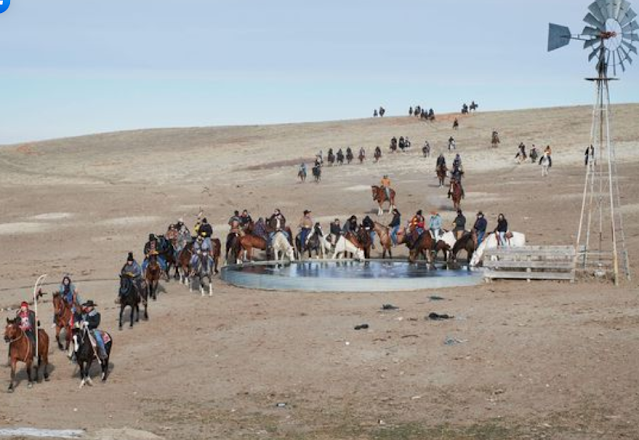 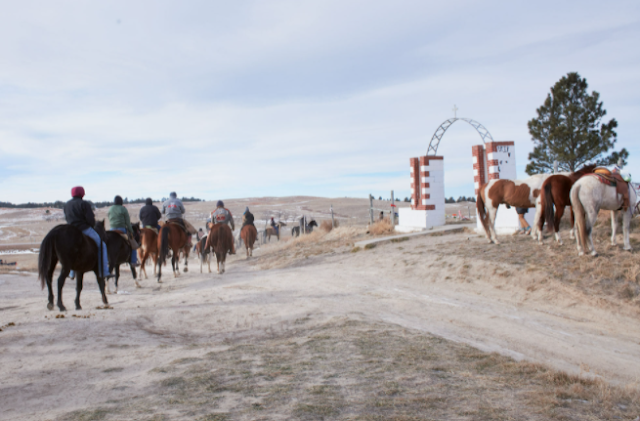 Arrival at Wounded Knee in 2021
The US Army murdered hundreds of men, women and children in the Massacre of Wounded Knee on December 29, 1890.
The Omaka Tokatakiya is the name chosen as we move into the Future of tomorrows leaders, the Leadership is made up of 17 youths and 2 Youth Adviser, we changed the name from "Bigfoot Memorial Riders", we finished our time of mourning for our Ancestors, and we feel that it's time to move on and Celebrate Life and a New Generation, with a Vision that our Children and Great Grandchildren will continue to live in good health, happiness, we have survived and will continue to carry the prayers that our elders of the Bigfoot Ride has made for us. -- Omaka Tokatakiya/Future Generations Ride
Photographer Ken Marchionno said, "131 years ago on this day, more than 300 Lakota men, women, and children were disarmed and murdered by the 7th Calvary of the United States near Wounded Knee Creek.
"Since 2004 I have joined Lakota riders to the site of the mass grave and remember those lives. We have traveled 300-miles to this site, starting where Sitting Bull was killed for the government’s fear of his strength. Riding through the South Dakota winter—blizzards and -50° wind chills—in an expression of resilience that is unmatched in my experience, children as young as 6 travel the entire distance on horseback.
"But the ride doesn’t end at Wounded Knee. Those who were wounded were left as a blizzard came in, and two days later, troops returned and any who were still alive were taken to Pine Ridge where some survived, but many died. So we ride on to Pine Ridge so that they are not forgotten."
Photos copyright Ken Marchionno. Published at Censored News with permission. Thank you.
at January 04, 2022