Rights of Salmon Case Brought Against City of Seattle, by Sauk-Suiattle Indian Tribe 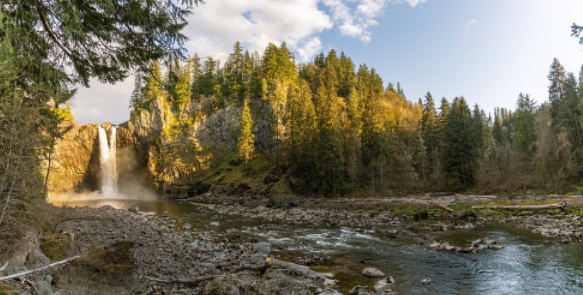 DARRINGTON, Washington -- On January 6, the Sauk-Suiattle Indian Tribe filed a lawsuit against the City of Seattle. The case, filed by the Tribe on its own behalf and on behalf of Tsuladxw (salmon in the Tribe's language), was filed in Sauk-Suiattle Tribal Court.

The Tribe seeks recognition that salmon have inherent rights to "exist, flourish, regenerate…and restoration," and that the Tribe possesses the duty to "protect and save" salmon in the face of continued harm and decline, including from the City of Seattle's dams on the Skagit River.

This case comes as several tribal nations, as well as communities within the U.S., Canada, and Brazil, and countries including Ecuador and Bangladesh, have recognized the legal rights of nature through lawmaking and court rulings. In August 2021, the White Earth Band of Ojibwe, in Minnesota, became the first tribe to bring a case to enforce the legal rights of nature in a tribal court.

The Sauk-Suiattle Tribe, known as the Sahkuméhu, ceded their aboriginal territory to the federal government through the 1855 Treaty of Point Elliott. As explained in the court filing, despite the Tribe's treaty-protected right and obligation to protect fish migrating to and from the Tribe's traditional fishing grounds, the City of Seattle constructed dams on the Skagit River without consulting with any tribe. The dams, the lawsuit argues, obstruct the passage of adult fish upriver, and block nutrients necessary to the health of juvenile fish as they migrate down the length of the river on their way to the ocean, contributing to the severe decline of salmon species.

The Skagit River provides habitat for all five wild salmon species, including two that are listed under the federal Endangered Species Act. In addition, the Southern Resident killer whales in Puget Sound, which depend on salmon from the river, were listed as endangered in 2005.

The Tribe brought the lawsuit seeking declaratory relief, including:

- A ruling from the Court that the City of Seattle has threatened and imperiled the Tribe and the salmon, within their aboriginal territory, and on the Sauk-Suiattle Reservation.

- A ruling that the Tribe possesses the obligation to protect the salmon.

- A ruling on other steps that are necessary to protect the salmon and tribal members.

Jack Fiander, Attorney for the Tribe - and the salmon as represented by the Tribe - explained, "The Sahkuméhu have witnessed the decline of Tsuladxw for a century. The salmon are their relatives, a gift of the Creator. The Creator's gift is being taken from them. It is time that the salmon's voices are not only heard, but that their rights are protected against human actions which prevent their survival. As my auntie and legendary fishing rights advocate Ramona Bennet once told me, 'salmon do not have cellphones, we must speak for them when they are in trouble.'"

Frank Bibeau, Plaintiff's Attorney for manoomin (wild rice), in the case Manoomin v. Minnesota Department of Natural Resources – the first rights of nature enforcement case to be filed in a tribal court – stated, "As the decline of nature accelerates, we must recognize and protect the rights of nature, as well as the treaty rights of tribes to protect nature. These cases are the first of many which seek to stop harmful projects and permits on the basis of those rights."

In 2018, the White Earth Band of Ojibwe, of the Chippewa Nation, adopted a tribal law recognizing the rights of wild rice. The rights of manoomin law is the first tribal law to recognize the legally enforceable rights of a plant species. Manoomin v. Minnesota DNR was filed by the tribe to protect wild rice from the construction of the Enbridge Line 3 tar sands pipeline which was permitted to use 5 billion gallons of water – a water withdrawal which has severely impacted the survival of wild rice.

Thomas Linzey, Senior Legal Counsel with the Center for Democratic and Environmental Rights, which is assisting with the wild rice case, as well as the first rights of nature enforcement case to be brought in the U.S. (Wilde Cypress Branch v. Beachline in Florida), added, "Increasingly, tribal nations, legislatures, and courts around the world are recognizing that nature possesses legal rights, including even the most basic right of nature to exist. This case brought by the Sauk-Suiattle Tribe to protect the rights of salmon is an acknowledgement that existing environmental laws and practices are insufficient to protect the species and nature."

The City has not yet responded to the lawsuit. A pdf of the complaint is available for download here.