Never in my life did I think I would be on the red carpet attending the Emmys. This life has been a wild ride of hard lows and unbelievable highs. At the heart of it is our earth. So many awards and nominations for films documenting our beautiful earth and the struggles of humanity on her. Speeches made acknowledging the climate crisis we are facing and changes needing to be made. Then the undeniable presence of inequality, inequity, the inhumanity of gross extravagance, and heartbreaking poverty that New York encapsulates so well.
Our struggle we've been fighting not since 2016, since 1492, has been a struggle of virtues and morality. The bottomless pit of wanting and vanity. Where the ultra-rich are seen as the pinnacle of western society for having the most, Lakota concept of greatness is defined by generosity and compassion.
Our presence on that red carpet signified we are still here. The indigenous people. The originals. Though some may have claimed victory in pushing through a pipeline in treaty territory illegally, they have only succeeded in driving another nail into our collective demise. But, we are still here, fighting, growing, bettering ourselves, growing stronger.
I'm thankful for the opportunity to be there, absolutely. Thankful for the generous hearts that made that possible- Shannon and Marc for helping fly us out and my sitters Aunt Karen and Val, the real MVPs that cared for my most precious resources.
The film wouldn't be possible without the Finns who have been the main funders of the film.
To Ladonna and Pearle, we aren't going to quit, ever. Thank you for your wisdom and gentle guidance and fierce hearts. For all our Water Protectors and land defenders- food sovereignty, revitalization of our original ways is imperative.
Relearning these ways because our children and coming generations are going to need that knowledge for the changes. We can bear the brunt of change for them.
Though there's this feeling that red carpets are only for the elite and exclusive, I hope our people, our youth see themselves in us there that night and know they are deserving and belong anywhere on this continent. 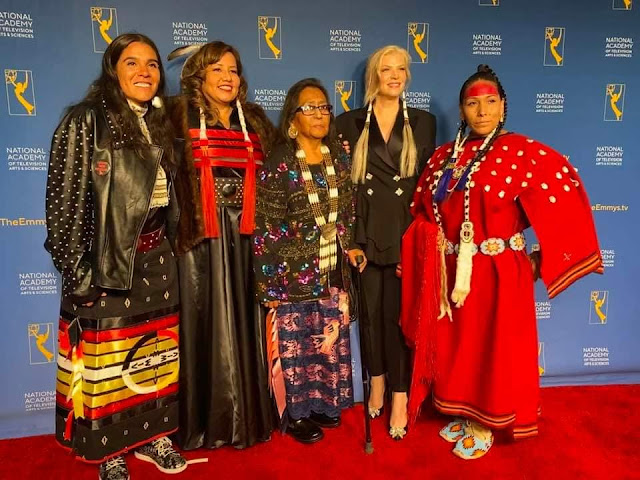