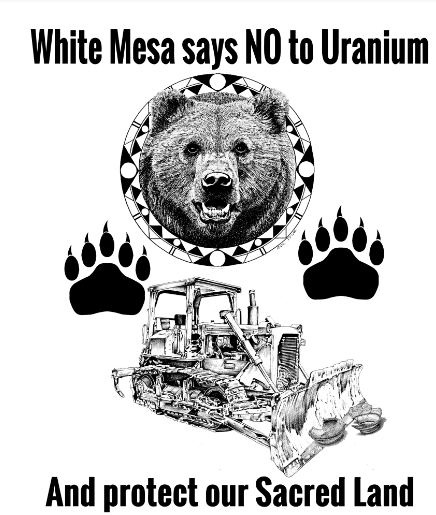 White Mesa Ute Protest and Spiritual Walk to Oppose White Mesa Uranium Mill
By Brenda Norrell
Censored News
French translation by Christine Prat
https://chrisp.lautre.net/wpblog/?p=7435
White Mesa Ute in southeastern Utah will protest the White Mesa uranium mill during their spiritual walk to protect the White Mesa Ute. Struggling to protect their sacred places and homeland, White Mesa Ute oppose the mill endangering the community and oppose it becoming an international dumping ground for radioactive waste.
White Mesa Ute are concerned for their community’s health, water, air, land, culture, and welcome others to join them on Saturday, October 22, 2022, 11 am Mountain time for their rally. The rally will be followed by spiritual protest walk to the White Mesa uranium mill.
Yolanda Badback, White Mesa Concerned Community said, "They are bringing toxic waste, radioactive waste, from places all across the United States to the mill in White Mesa. In the past, some has spilled."
"I can smell the mill from my house when it’s running. We are the closest community. If there’s a spill, or an accident, it’s our children who ride the school bus on these roads with the trucks every morning. That’s why we’re standing up and saying: 'Enough. We want to keep our home and our children safe.'”

Thelma Whiskers, White Mesa Concerned Community, wants her homeland protected for future generations.
"Here on our reservation in White Mesa, I’m worried about the mill. We are just a small community of about 300 people."
"Saturday is a day I will spend with my family, my kids and grandkids. Please come walk with us and support clean air and clean water for our children and our grandchildren here in our Ute Mountain Ute community.”
The mill is owned by a Canadian corporation, and is among the dangerous mining and radioactive dumping underway around the world by companies based in Canada.
The mill is owned by Toronto-based Energy Fuels Resources. It is situated off U.S. Highway 191 between Blanding and the Ute Mountain Ute Nation homeland on White Mesa.
This year, a new report revealed that the uranium mill in southeast Utah is acting as an unregulated radioactive waste site. Tribal members and environmentalists are now calling for changes on how it’s run, KUER Radio reports.

White Mesa Mill, which is just south of Blanding, produces and recycles uranium. The report, published by the Grand Canyon Trust, said radioactive waste from industrial and military facilities are sent there. Only a small amount of uranium is extracted from the waste, the report said, and the leftovers remain at the mill.

"Tim Peterson, the cultural landscapes director at the Grand Canyon Trust, said over 700 million pounds of waste has been buried at the site."

“It's cheaper for polluters to send their waste to the mill than to a licensed low-level radioactive waste disposal facility,” he said during a press conference.

“The long and short of the report and our recommendation is that if the mill wants to function like a radioactive waste disposal business, it should be regulated like one.”

The mill — near the border of Bears Ears National Monument — first opened in the 1980s and was supposed to only operate for 15 years, but it stayed open because of its shift in business.

Listen and read more at https://www.kuer.org/2022-03-15/white-mesa-uranium-mill-is-running-as-an-unregulated-radioactive-waste-site-report-states

Annual rally, protest, and spiritual walk to protect the White Mesa Ute community’s health, water, air, land, culture, and sacred sites from the nearby White Mesa uranium mill and oppose the mill becoming an international dumping ground for radioactive waste from around the world. The protest and walk are sponsored by the White Mesa Concerned Community and the Ute Mountain Ute Tribe. All supporters welcome.

The White Mesa Ute Community Center, located in White Mesa, Utah, just south of Blanding, Utah off of Highway 191. The community center is located on the west side of the highway. Turn in at the gas station and continue one block south to the community center.