In Memory of Bob Robideau 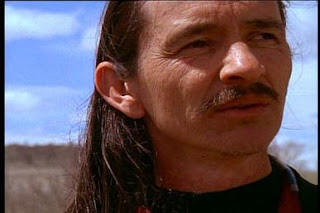 In Memory of Bob Robideau
International Peltier Forum: "We were just notified that Robert Robideau passed away at his home in Barcelona, Spain on Tuesday, February 17th, 2009."
Remembering a warrior and brother at Big Mountain
A tribute to Bob Robideau
This is one great brother to always remember. I am so privileged that I got to see Bob at Pueblo, Colorado, during the Longest Walk II --almost a year ago.
Brother, I will think of you as I stand my ground along with my elders at Big Mountain and knowing that you were a brave warrior when AIM was alive and strong! Spirit Brother, I will remember you when I look up to the Tree of Life, the Sun Dance Center Pole in that Sacred Hoop of our peoples, and knowing that you are now with our ancestors.
Aho. To All My Relations. Kat, Dineh of Big Mountain
Listen to Bob's final interview on justice for Leonard Peltier
Red Town Blog Talk Radio
http://www.blogtalkradio.com/RedTownRadio Robert Robideau
Jan. 31, 2009
Robert Robideau: a member of the Turtle Mountain and White Earth Ojibwa tribes. He has been an active member of the American Indian Movement (AIM) since 1973. Robert Robideau will be talking about the Leonard Peltier and the Anna Mae case. He will be talking about how it can affect the freedom of Leonard Peltier. We will be taking questions relating to these cases.
Bio Robert Robideau, in his own words
I am a member of the Turtle Mountain and White Earth Ojibwa tribes. I have been an active member of the American Indian Movement (AIM) since 1973. A member of Northwest AIM, Dakota AIM in the 1970s, today I am a member of Autonomous AIM. I served as AIM spokesman for New Mexico from 1993-94. Darrell (Dino) Butler, and I were acquitted in the deaths of two FBI agents in 1976 on grounds of self-defense.
The charges arose after a shootout with the FBI on Pine Ridge reservation in June of 1975 that left two FBI agents and an Indian man dead. This period known as the reign of terror, in which 60 AIM members were killed and hundreds more assaulted in a government-sponsored action to destroy AIM. These killings and assaults came in the aftermath of the Wounded Knee takeover by AIM in 1973. I have served twice as National-International Director for the Leonard Peltier Defense Committee (LPDC).
Leonard Peltier, is an internationally known political prisoner who has served more then 32 years in prison for the same alleged offense as I was charged and acquitted. I have appeared on 60 Minutes, West 57th Street, EDJ and in other major television documentary programs. I have also appeared in the documentary film, Incident at Oglala and other major documentaries relating to AIM, Anna Mae Aquash and Peltier.
I have spoken extensively on AIM, Leonard Peltier and the Anna Mae Aquash cases both in the States and Europe. I have written extensively on the Peltier case and on Native American Indian issues. I am the founder and director of the American Indian Movement Museum in Barcelona, Spain, where much of the history of AIM and my art work remains on display.
An Inventory of work with the Leonard Peltier Defense Committee and the American Indian Movement, from 1973-1994 is located at the University of New Mexico, Center for Southwest Research.My art can be found at the Bonnie Kahn Gallery.
In a recent e-mail, Bob said he planned to return to the states in March and make his home here, possibly in Santa Fe. Sincere condolences to his family and friends.
at February 18, 2009

Arrangements are currently being made to bring him back to the United States and plans are in the works in regard to services. Friends and family of Bob will be welcome to attend the services; the services are most likely will be the end of next week in Portland, Oregon. Exact date and location will be announced soon.

As with the passing of a loved one, an account has been set up to assist the family with the financial responsibilities of laying Bob to rest. If you would like to help, please send donations to:

Your positive thoughts, prayers and assistance are greatly appreciated during this time.

On behalf of The Robideau Family, Thank you!

For those who are unable to travel to Portland, we will have services in Edgewood, New Mexico after.

More information with dates and location to come.

It has come to my attention of a couple of changes to the account set up for donations; the correct information is located below. Arrangements have been made to bring Robert back to the United States and plans are in the works in regard to services, we should know a definite date early next week, if not sooner. Friends and family of Bob are all welcome to attend the services, we will have TWO (2) services; the initial services are planned to take place in Portland, Oregon, some time within the next couple of weeks. Exact date and location will be announced soon. For those who cannot make it to Portland, there are plans for services to take place after Portland, in New Mexico, just outside of Albuquerque in Edgewood.

As with the passing of a loved one, an account has been set up to assist the family with the financial responsibilities of laying Bob to rest. If you would like to help, please send donations to:

*You can send it to any US Bank in the United States, via mail or transfer, or walk-in.


I truly apologize for any confusion, and of course your positive thoughts, prayers and assistance are greatly appreciated during this time.

On behalf of The Robideau Family, Thank you!