On April Fool’s Day, 2011, Navajo Nation President Ben Shelly testified at an oversight hearing held by the U.S. House Subcommittee on Indian and Alaska Native Affairs in Washington, D.C. on “Tribal Development of Energy and the Creation of Energy Jobs on Indian Lands.”

In a rambling, inconsistent, and grammatically challenged seven-page statement, Shelly claims to favor a “multi-prong” approach to energy development as the answer to Navajo poverty and unemployment. He takes a passing sniff at wind and solar potential, but then circles back to the familiar poisoned trough of good ol’ dirty coal, even raising the ghost of Desert Rock.

This is where Shelly’s script really gets mixed up, starting with plagiarism and going downhill from there. He begins by cutting and pasting language from the San Juan Citizens Alliance web site, including the fact that most of the electricity that would have come out of the Desert Rock Energy Project, was “slated for Tucson/Phoenix and the Las Vegas markets. [Only] a small percentage, up to 5%, of the proposed power from Desert Rock would stay on the Navajo Nation, where many citizens continue to live without electricity.”

This was just one of the many compelling arguments against Desert Rock, but in Shelly’s nonsensical cut and paste world, who cares? He tosses in a reference to “Clean Coal Technology” and thousands of jobs, both of which are pure fantasy, and calls it good.

First of all, it is troubling that an elected leader and spokesman of America's largest Indian nation would stoop to such a low, unprofessional level of plagiarism and intellectual property theft while testifying before an official Congressional body. Secondly, it confirms up-until-now whispered rumors that the Navajo tribal president hasn't had an original thought since Jesus was a little boy. And third and most distressing is the fact that his public testimony was recklessly conceived in nature and wildly inaccurate upon delivery in a number of highly important policy areas as regards critical Navajo energy and water futures.

During his vice presidency, Shelly supported Desert Rock until he announced his presidential candidacy. Then he said he opposed it. And now that he is president he is supporting it again, or at least that's what he told the congressional subcommittee under oath. What about all the Navajo people who voted for him last year because he said that he opposed DR? The truth is that he lied to them–the Navajo voting majority—and that's no April Fool’s joke.

"Clean Coal Technology" (CCT) is a technological myth. There is no such thing as clean coal–just like there is no such thing as clean uranium. In fact, strip mining and burning coal activates and releases as much if not more deadly radioactive materials into the environment than mining and milling uranium. So if he supports the continuation of the Navajo Nation uranium ban because of its radioactive dangers–as he testified–then he should also support a Navajo Nation-wide ban on coal for the same reason.

We, Diné CARE, have the renewable energy plan that would actually fulfill Ben Shelly’s campaign promise to bring clean renewable solar and wind power to our energy- deprived and suffering people, who are forced to burn dirty and dangerous coal in their woodstoves. In order to make that happen we would be more than willing to work in true partnership with the Silly and Shim administration. But first, he needs to stop sending out people like Steven Etsitty to openly blame the innocent Navajo victim for "causing" indoor air pollution before all those white people in the EN3 farce.

Speaking of shameful acts, Shelly should be ashamed for approving the recent Four Corners Power Plant lease extension for a mere $7 million a year until 2041 (or is it 2064–the year he quoted to Congress?). The CEO of Arizona Public Service Company makes over $5 million a year alone, yet our tribal leaders, who are working furiously to bargain their way out of corruption charges, betrayed us and sold out our precious future generations for a box of beads and trinkets.

Equally shameful is our government’s and Mr. Shelly’s rejection of SCR pollution control at Four Corners Power Plant and Navajo Generating Station. Instead he spoke of “a phased approach to emissions reductions for the plants, in coordination with the glide path from 2004 to 2064.” A sixty year soft landing for our leaders’ industry friends. Meanwhile, how many hundreds or thousands of our Diné people will sicken and die from sixty years of nitrogen oxide, sulfur dioxide, mercury, and the other poisons coming out of those stacks?

The Navajo Nation has no energy policy because of tribal leadership failure. APS controls our energy future. All the off-reservation, non-Indian power company had to do was threaten to close the Four Corners Power Plant if the tribe did not renew its lease. And because of the threat, it got its way. That's not tribal sovereignty. That's economic blackmail. Salt River project is threatening to do the same thing with the Navajo Generating Station lease. That too is extortion by a non-Navajo energy corporation, but we can probably count on our President going to bat for these SRP thugs too.

Mr. President, during your presidential campaign, you and your running mate said that both of you opposed the proposed Northeastern Arizona Indian Water Rights Settlement Agreement, and its NGS Water Provisions. Those provisions install forever the illegal waiver of Navajo water rights to the Arizona portion of the Upper Colorado River Basin. But now that you are both in office, you haven't acted to rescind the agreement that you said you opposed. What's the matter, cat got your tongue? A copy-cat, perhaps?

Note: President Shelly's testimony, along with others on the panels, is at:
http://naturalresources.house.gov/Calendar/EventSingle.aspx?EventID=229900 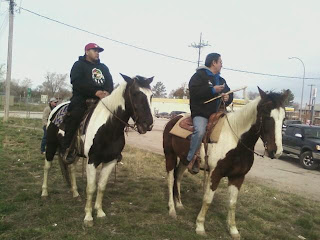 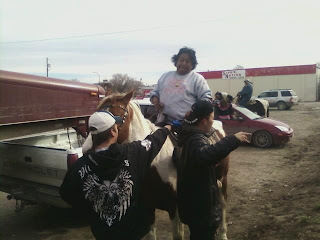 The Long Walk 3 northern route walked into Pine Ridge, South Dakota, last week, then walked to the bordertown of White Clay to offer prayers for healing. They supported the occupation of the elderly center on Pine Ridge and in turn, received support for the Long Walk 3 for the reversal of diabetes. On Sunday, the walkers were in Wanblee, South Dakota. Thanks to Carl Bad Bear Sampson, Western Shoshone, and his father, for sending the photos to Censored News via cell phone.

Update Tuesday, April 5, 2011 from LW3 northern route: "We are in Rosebud, and walking to Mission which is about 12 miles. Runners will be running from Mission to Carter, the reZ border. Lower Brule is sending runners to help us run from Reliance to Lower Brule SD. Schedule was change because we wanted to support the soberity Walk to White Clay and the Elderly occupation. Schedule will be change but we'll keep posting. Some place we don't have phone receptions or internet but I'll try to keep posted. thank you for supporting Longest Walk 3." Chris Francisco
at April 04, 2011 No comments: