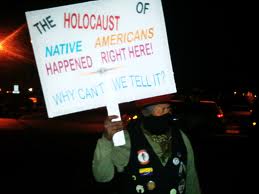 Media bound by fear and complacency, responsible for the collapse of rights and justice in Arizona

TUCSON -- The media is responsible for the collapse of human rights and banning of books in Arizona, along with the racist Arizona legislators, state school head and corrupt politicians. The media has become frozen in fear, too timid to bang on the doors and find out why the Tucson schools banned the award winning books of Chicano and Native American authors this week.

In the national news in Indian country, the news coverage has collapsed into plagiarism, rewrites, dull mediocre posts and profiteering from others work.

The reporters in Indian country have become complacent to sit in their easy chairs and steal the hard work of  others, or simply publish the press releases of corrupt tribal politicians who sell out their people. Even worse, they champion the genocidal agenda of politicians like John McCain and Jon Kyl.

Further, the new trend in Indian country reporting is to silence the wisdom of traditional Native Americans and instead profiteer from the promotion of gambling or distract with internal political fighting. The corporations are protected by the editors who assign non-Indians to cover serious issues, who will dilute the impacts of the desecration of sacred places and the deadly emissions of coal fired power plants.

Now, there is a new addition to this agenda, it is the degradation of women as seen in the centerfold type spread by the new managing editor at Indian Country Today, formerly with Playboy.

There are no Navajo news reporters out on Black Mesa exposing what has happened to the Navajos of Black Mesa, as their land is gutted by coal mining, their aquifer depleted and air poisoned by coal fired power plants.

There are no reporters out on Tohono O'odham land exposing the constant abuse of O'odham by the US Border Patrol or how the elected Tohono O'odham Nation officials have been compromised and co-opted by the US government and gambling promoters.

Where are the news reports on how the O'odham people suffer, while the Desert Diamond casino brings in millions for non-Indian companies, outside charities and the state of Arizona.

While cheerleading for young people to die in the bogus wars of US politicians, the media fails to investigate the truth of those wars.

In Arizona, like the rest of the United States, news reporters have become complacent in their easy chairs and satisfied with their own mediocre status as props. They have become too afraid of politicians and readers to do their jobs; too fearful of displeasing their editors to undertake real reporting; and too drugged by their paychecks to arise with courage.

Instead of exposing Maricopa County Sheriff Joe Arpaio as a criminal, CNN and Fox News portrayed him as a folk hero. There are no reporters on the border exposing the white supremacists and militia armed with assault weapons. Where are the investigative news reports of the trail of assault weapons in Project Gunrunner back to 2005 in Texas?

The banning of books by award winning Chicano and Native American authors this week by Tucson schools should signal the alarm to hold the media responsible for failing in their ethical responsibility to expose injustice and uphold human rights.

As it was with the English only legislation, the banning of books in Arizona is just the beginning of what could become a nationwide trend. The media should be held responsible for allowing the collapse of justice and truth in Arizona.

We, as reporters, whether paid or unpaid, have an ethical responsibility to uphold the truth. We have been given a precious gift, the gift of utterance, and we should use it for the good of humanity.

We do not normally have to fear being murdered for what we write in this country. We do not have to succumb to fear and complacency as we shelter this priceless gift.
.
at January 15, 2012 3 comments: