TUCSON -- High school students from the now-forbidden Mexican American Studies classes in Tucson spoke out during Martin Luther King Day here, protesting the school board and state of Arizona.
Describing the seizure of books from his classrooms, one student said it was an attempt to "take away our power."
"Knowledge is power," he said, describing how education and knowledge form beliefs and, "who we are."
Another student describes how ethnic groups other than Latinos at Tucson schools can still discuss their cultures, while Mexican American culture discussions are now forbidden. Further, she says teachers are now "under a microscope" and issues like feminism, oppression and Martin Luther King are forbidden topics.
Tucson schools seized Chicano and Native American books from classrooms after the board voted Tuesday to forbid Mexican American Studies, rather than fight the decision by the state school head, who threatened to extract millions in education dollars unless the classes were banned.
Watch the Censored News videos of students speak out today during Martin Luther King Day in Tucson. 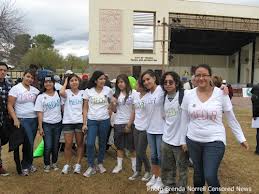 Listen to more students at: http://bsnorrell.blogspot.com/2012/01/tucson-students-speak-out-on-forbidden.html

Mexican American Studies students marched and rallied in honor of Martin Luther King Jr Day in Tucson today, protesting the decision by Tucson Unified School District board to forbid their classes. Students said it was like being in Nazi Germany when school officials came into their classrooms and seized all their books, banning Chicano and Native American literature. Photo and video by Brenda Norrell Censored News.
at January 16, 2012 No comments: