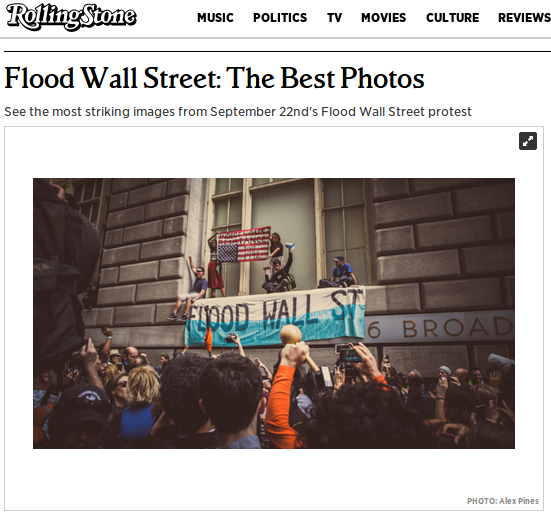 Dine' Robyn Jackson's photo, as it happened, was even better on Censored News!
.
at September 24, 2014 No comments:

Dine' Women on Democracy Now! 'NO' to being a 'resource colony' 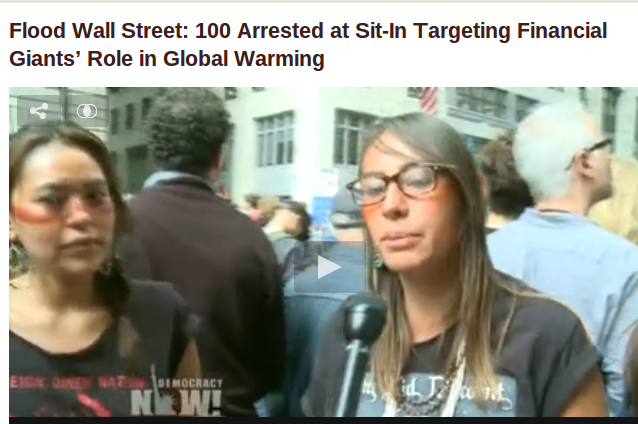 Watch on Democracy Now! Dine' (Navajo) women say 'NO!' to resource colonization on the Navajo Nation. 'NO!' to coal and uranium mining:
http://www.democracynow.org/2014/9/23/flood_wall_street_100_arrested_at
at September 24, 2014 No comments:

Jerry Brown, one of the worst governors for fish, water and the environment in California history, spoke to world leaders at the United Nations Climate Summit in New York City on September 23 in a cynical attempt to greenwash his deplorable environmental record.

“The California story is a very hopeful one,” Brown gushed. “It’s a story of Republican and Democratic governors pioneering innovative climate strategies. It’s not been easy, it’s not without contest, but we’re making real progress."

“I believe that from the bottom up, we can make real impact and we need to join together,” added Governor Brown. “We’re signing MOUs with Quebec and British Columbia, with Mexico, with states in China and wherever we can find partners, because we know we have to do it all.”
Read more »
at September 24, 2014 No comments:

Please post and distribute. Nia:wen.
MNN. Sep. 23, 2014. The powered elite money brokers running the global economy are descendants of an ancient bloodline known as the Anunnaki. The most important intel exposing them is their diabolical “Secret Covenant” plan for humanity. Let us look at some of it.

They state that: “The poisons will be hidden in everything that surrounds them, in what they drink, eat, breathe and wear. We must be ingenious in dispensing the poisons for they can see far. We will teach them that the poisons are good, with fun images and musical tones. Those they look up to will help. We will enlist them to push our poisons.” Read: Secret Covenant.

Gretzky: “A Senate seat for this pack of lies about Harper!”
Celebrities, heroes, athletes, musicians, actors, politicans, etc. promote the psychopathic agenda of the ruling elite. “Stars” are enlisted to show us how to seek amorality, self-destruction and hedonism. They will establish opposites in the government and control both sides. Work and war are performed by the masses while the oligarchs unashamedly prosper.
Hate is their ally. Anger is their friend. Artificial factions foment divisions. Trained provocateurs in our midst foment chaos so that we will hate our families and kill our own children. Should we complain, we are ridiculed or killed or ignored. All aspects of our lives are controlled.
Our lands have been occupied by the Corporation of Canada since 1867 and the Corporation of the Unitd States since 1871. Our resources were stolen to take total control over us. We are forced to live under illegal laws that steal our freedom and imprison us. Their money system keeps us and our children in debt or poverty. Money, time, the calendar and even music were reconfigured to control us.
They say “we will use our media to control the flow of information and their sentiment in our favor”; all information incites constant fear; and they shall use fear as their friend and anger as their ally.

Dekanawida: “I will return with the Peace …”
Some of our own people have been recruited to help them in exchange for money, earthly rewards and titles. Abide by their severe rules or you don’t exist. Bankers have all our money. They plan to kill 80% of the people on earth and decide who lives and who dies.
Their greatest weakness is their reliance on the 33rd degree orders that run the self-serving matrix for the bankers. It’s all based on lies. The pyramid is crumbling.
Their greatest fear is they will be cast down from whence they came for all eternity. The secret covenant is no longer a secret. Their control grid is coming apart. We can see who they are. Some are beginning to flee. They are being hunted down. No one will help them. The Hanging Tobacco Society is always at the ready!

Neil Young sings in his latest song:“Protect the wild, tomorrow’s child. Protect the land from the greed of man. Take down the dams, standup to oil, protect the plants and renew the soil. Who’s going to stand up and save the earth?” Neil Young. “Who’s going to stand up for the earth?”
MNN Mohawk Nation Newskahentinetha2@yahoo.com For more news, books, workshops, to donate and sign up for MNN newsletters, go to www.mohawknationnews.com  More stories at MNN Archives.  Address:  Box 991, Kahnawake [Quebec, Canada] J0L thahoketoteh@hotmail.comfor original Mohawk music visit thahoketoteh.ws
Read: That they are no longer secret. Secret Society’s Greatest Fear.
Watch: David Icke on ISIS.
*Gretzky: When you have grown men playing a boy’s game for too much money, this is what happens to their mind. Does Gretzky want a senate seat?
Read: Illuminati, Nazis and Israel.
Read: MNN. “Brain Police”.
at September 24, 2014 No comments: