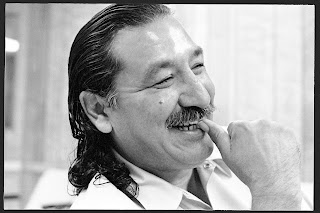 ALBUQUERQUE -- The Red Nation has named Leonard Peltier to be Grand Marshal for the celebration on Monday, October 12—the very first celebration of Indigenous Peoples' Day in Albuquerque, New Mexico.  The event will begin at First Street and Central Avenue at 5:00 p.m.
This week the Albuquerque City Council declared the celebration of Indigenous Peoples' Day on the second Monday of October, a day nationally recognized as "Columbus Day".  The Red Nation sparked the campaign last February by leading an Abolish Columbus Day demonstration, in coalition with other community groups, at the steps of City Hall.  City Council President Rey Garduño—with guidance and input from The Red Nation and community organizations—wrote, sponsored, and proposed the initiative. Six councilors endorsed and three abstained.  Albuquerque joins cities—such as Seattle, Minneapolis, St. Paul, Berkeley, Portland, Lawrence, and Santa Cruz—that have also declared similar celebrations.
"Columbus Day celebrates the death and disappearance of Native people, land and life," said Peter Clark, co-director of the International Leonard Peltier Defense Committee (ILPDC) headquartered in Albuquerque.  "Indigenous Peoples' Day celebrates Indigenous resistance and resilience.  Leonard Peltier has dedicated his life to opposing racial violence, government and corporate plunder of sacred lands and water, and the continued violation of treaties and Indigenous rights.  Leonard and the ILPDC are very honored by The Red Nation's gesture.  We only wish Leonard could personally attend to enjoy the celebration."
Native American activist Leonard Peltier was wrongfully convicted in 1977 in connection with the shooting deaths of two agents of the Federal Bureau of Investigation on the Pine Ridge Indian Reservation, South Dakota. The federal prosecutor has twice admitted that the government cannot prove Peltier's guilt.
"Prosecutors and federal agents manufactured evidence against Leonard, hid proof of his innocence, presented false testimony, ignored court orders and lied to the jury. People are commonly set free due to a single constitutional violation, but Peltier—innocent and faced with a staggering number of constitutional violations—has yet to receive equal justice," Clark said.
In 2003, the 10th Circuit Court of Appeals found that "Much of the government’s behavior at the Pine Ridge Reservation and in its prosecution of Mr. Peltier is to be condemned.  The government withheld evidence.  It intimidated witnesses.  These facts are not disputed."
Imprisoned for nearly 40 years—currently at the federal prison in Coleman, Florida—Peltier has been designated a political prisoner by Amnesty International.
Nelson Mandela, Archbishop Emeritus Desmond Tutu, 55 Members of Congress and others—including a judge who sat as a member of the court in two of Peltier’s appeals—have all called for his immediate release.
These and other supporters believe that, before leaving office, President Obama will correct this injustice and free Leonard Peltier by a grant of Executive Clemency.
###
Information:  www.whoisleonardpeltier.info
International Leonard Peltier Defense Committee
PO Box 24, Hillsboro, OR 97123
(505) 217-3612
at October 09, 2015 No comments:

Please post & distribute. Nia:wen.
MNN. 9 Oct. 2015. Like Red-X “o’tah Man” is from the fifth dimension. Denis Codere will be forever known as the “shit mayor” of Montreal. He wants to dump 8 billion litres of raw o’tah into our river.

Part of the land of the rotino’shonni:onwe.
Red-X was circling around tsionni’tiotake [known as Montreal]. He noticed his old friend, Stinky o’tah man, rising out of the shit at Turcot Yard. He had a lot of shit to tell Red-X. They talked about the history of the shit problem on Montreal Island. The kanion’ke:haka [Mohawks] dealt with it by working with mother earth, making holes, shitting in it, covering it and then moving for three generations to regenerate the earth.

Red-X said, “Hey buddy, for thousands of years, on tsionni’tiotake, we had over 55 villages. We let the land lay fallow for three generations, for the lifetime of mother, children and grandchildren. When the babies returned they would be grandmothers and the land would be new”.

they came and came & brought their shit with them.
The invaders moved in disguised as settlers. They started shitting in all the holes everywhere, until there were no holes left. Then they made a big pipe so all the shit could be funneled into a huge outhouse. Now their shit hole is full and overflowing. They want to dump directly into our river, kaniatarwano:onwe.” The o’tah man said, “Now you see where it all leads”. It has become a stinking toxic mess. Their shit is being used as a weapon of war.
Today on Montreal Island all the holes are filled with shit. The Shit Mayor wants to shit directly into the river and avoid making any new holes. The oneh’kanos is the sacred blood of mother earth, never to be shit into. In nature all animals shit on the ground. Red-X and o’tah man reiterated, “Everybody in the world shits everyday. Some on a toilet, others in a hole. Everybody knows you do not shit in the rivers”. Only beside but not in.

stop the ‘shit mayor’
Everyone in Montreal has to have their own outhouses to take care of their own shit, instead of going all over the world and shitting in everybody else’s hole. Our river will not wash away their problem. It will go into the ocean and circulate throughout the entire globe. o’tah man noticed the crumbling infrastructure, artificial buildings, general filth and the total disregard for the natural world. He wondered if it was time for these people to leave so that our mother could heal.
Red-X could see o’tah man’s point. Being a wise fifth dimension medicine man, he sees millions of people sitting closely and shitting everyday. We don’t want them to mega oh ‘hon’nita’non’taks, Red-X thinks the new McGill University kanion’ke:haka [Mohawk] Board of Governors should direct all its students to work everyday only on how to turn human shit back into earth in three months.

Mohawk McGill to the rescue.
As John Fogarty sings: “Well, take me back down where cool water flows. Let me remember things I love. Stoppin’ at the log where catfish bite. Walking along the river road at night. Barefoot girls dancing’ in the moonlight. I can hear the bullfrog callin’ me. Wonder if my rope’s still hangin’ to the tree. Love to kick my feet way down the shallow water. Shoo fly, dragon fly, get back to your mother. Pick up a flat rock, skip it across. Green river. [Green River].
MNN Mohawk Nation News kahentinetha2@yahoo.com or more news, books, workshops, to donate and sign up for MNN newsletters, go to www.mohawknationnews.com More stories at MNN Archives. Address: Box 991, Kahnawake [Quebec, Canada] J0Lthahoketoteh@hotmail.com for original Mohawk music visit thahoketoteh.ws
Coderre’s o’tah fest. http://mohawknationnews.com/blog/2015/10/07/montreal-to-dump-otah-into-river/
Truth Reconciliation Commission, now the hard part.
Stop secrecy. TPP.
ISIS. u.s. isis. led coalition.
Putin on NWO.
at October 09, 2015 No comments: