Bordertowns: Murder by police, fueled by the media 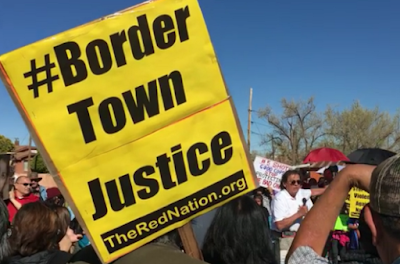 Murders by police are treated with impunity in the US, and the media is a player in these crimes

Beginning in the 1970s, the US Civil Rights Commission held hearings in bordertowns around Indian lands and documented the tortures and murders of Navajos and other Native Americans.
While the testimony focused on white racists who carried out these crimes in bordertowns, police also committed murders and were never prosecuted.
In fact, decades ago, police were able to silence the media and the prosecutors.
What has changed? The internet and social media.
Today, when an officer beats or kills a Native American, or anyone else, as a result of racism, over-reacting, or the use of excessive force, there is a fast way to let the world know.
Decades ago, we relied on newspapers to expose the brutal tortures and murders in bordertowns around the Navajo Nation and Oglala Sioux Nation.
Those bordertowns -- where American Indians were killed for sport by white racists -- included Winslow, Arizona, Farmington, New Mexico, and Rapid City, South Dakota. In Farmington, the crimes were often carried out by teenagers.
The Farmington Daily Times, which now has new owners, was exposed for changing the facts in a news article I wrote while I was a staff writer there in the early 1990s. White teens beat Navajo teens with baseball bats at a convenience story near Farmington. The newspaper changed the facts, to make it appear that the Navajo teens deserved those broken bones.
After providing testimony of this to the US Civil Rights Commission, I was terminated by the newspaper. I write this now to show how the media in these bordertowns have been, and are today, a part of the ongoing injustice, racism, violence and tragedy.
Today, the media in Arizona, South Dakota and elsewhere, continue to fuel racism, to contribute to violent crimes, by refusing to publish the facts and by refusing to expose the deadly force by police that results in the murder of people of color.
On the border of the US and Mexico, border patrol agents carry out rape, torture and murder, and are never held accountable.
Reporters today fuel these tragedies by refusing to leave their easy chairs and actually go out in the communities and cover the news.
at July 27, 2016