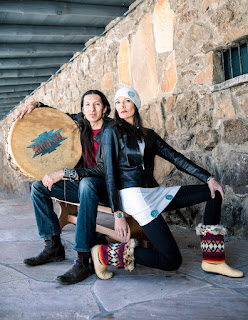 Sihasin, the multi award winning rock duo from the Navajo Nation, is excited to announce their coast to coast summer tour schedule.
For over 20 years brother and sister Jeneda and Clayson Benally were the heartbeat of the critically acclaimed Native American punk band Blackfire. Their songs of resistance caught on around the world with Joey and CJ Ramone, Cyril Neville, producer Ed Stasium and countless others.
In their new band Sihasin (Hope in the Navajo language) Jeneda and Clayson have created an explosive sound out of just bass and drums inspiring their listeners with a hard punk backbone softened by folk, world, traditional and kept thumping by pop.
Sihasin has recently been featured on NPR's All Things Considered, Arizona Highways, Le Figaro Magazine, The View, and countless other radio and press.
Their credits include the 2013 Best Rock album at the Indian Summer Music Awards, 2014 Debut Group winner at the Native American Music Awards, 2014 Rockwired Magazine Editors Choice and more.
Their tour starts on Wednesday July 13th at the OMNI COMMONS Ballroom in Oakland, Calif. 4799 Shattuck. On Thursday July 14th Sihasin is the opening act for World Fest in Grass Valley Calif. Also performing on Friday at World Fest along with their traditional Navajo Dance Troupe The Jones Benally Family, In Schaumburg Illinois on Tuesday July 19th at the Trickster Gallery, 190 S.Roselle Rd. Schaumburg 60193, Friday July 22-24th at the Grassroots Festival in Trumansburg N.Y., Tuesday July 26th at the Project Destiny of Faith in Pittsburgh Pa. 3737 Brighton Rd. Pittsburgh PA. 5P.M. Community concert, Saturday, July 30th The Woody Guthrie Center in Tulsa Oklahoma 2P.M. Free concert and in Flagstaff Ariz. On August 6-7th at The Museum Of Northern Arizona Navajo Show. Please check www.sihasin.com or Facebook for further information.