Colorado Spy Files: 'Leave it in the Ground' targeted by police 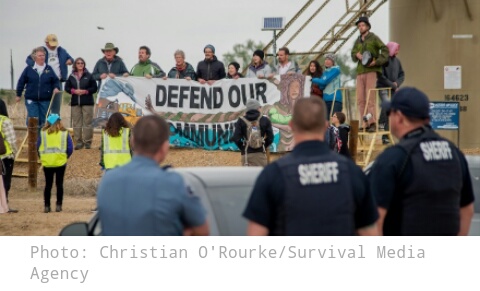 The latest spy files reveal police in Lakewood, Colorado, and federal agents, went undercover to spy on the Keep it in the Ground movement and other organizations, during a BLM oil and gas auction of public lands in May.
The Intercept has exposed law enforcement targeting those defending the earth, air and water. Meanwhile, violent criminals are often ignored as time and money are spent spying on peaceful land defenders.
Colorado has a long history of spying on American Indians and activists. It was in Denver that some of the first police spy files were exposed. Those targeted included the American Indian Movement, Big Mountain residents, Native scholars and even the attorneys at the Native American Rights Fund. A woman in her 80s was spied on by Denver police for having a Leonard Peltier bumper sticker on her car.
Former South Dakota Sen. James Abourezk was included. Abourezk said he didn't have a clue why he was targeted by Denver intelligence police.
Those police spy files were exposed in Denver in 2002, following years of dramatic protests in Denver focused on abolishing Columbus Day.
Russell Means led most of those protests. Means was also targeted in the secretive Operation Chaos, when US agents spied on American Indians and their supporters in other countries, beginning on the 1970s.
Now in July of 2016, at the Intercept there are documents showing the latest police and federal spy files in Colorado on movements. Those spied on include 350.org, Breakthrough Movement, Rainforest Action Network, and WildEarth Guardians.
The Intercept exposes that agents relied on intelligence gathered by oil and gas polluter Anadarko.
Read the article, and see the documents, at The Intercept, by Lee Fang and Steve  Horn:
https://theintercept.com/2016/07/19/blm-fracking-protests/ 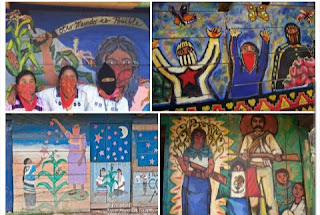 Celebrate the arts, music and dance with the Zapatistas in
Oventik on July 29, 2016
Zapatistas message at Enlace Zapatistas:
.http://enlacezapatista.ezln.org.mx/2016/07/18/the-geography-oventik-the-calendar-july-29-2016/

For la Maestra, with affection

For la Maestra, with affection
July 2016