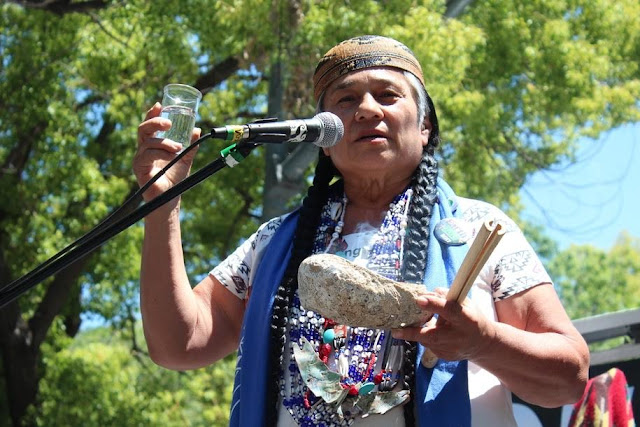 Caleen Sisk, Chief and Spiritual Leader of the Winnemem Wintu Tribe, speaks at the Oil Money Out, People Power In rally in Sacramento on May 20. Photo by Dan Bacher.

On August 17, a California Indian Tribe, two fishing groups, and two environmental organizations joined a growing number of organizations, cities and counties suing the Jerry Brown and Donald Trump administrations to block the construction of the Delta Tunnels.

The Winnemem Wintu Tribe, North Coast Rivers Alliance (NCRA), Institute for Fisheries Resources (IFR), Pacific Coast Federation of Fishermen’s Associations (PCFFA) and the San Francisco Crab Boat Owners Association filed suit against the California Department of Water Resources (DWR) in Sacramento Superior Court to overturn DWR’s approval of the Twin Tunnels, also know as the California WaterFix Project, on July 21, 2017
”The Winnemem Wintu Tribe has lived on the banks of the McCloud River for thousands of years and our culture is centered on protection and careful, sustainable use of its salmon,” said Caleen Sisk, Chief of the Winnemem Wintu Tribe near Mt. Shasta. “Our salmon were stolen from us when Shasta Dam was built in 1944. “

”Since that dark time, we have worked tirelessly to restore this vital salmon run through construction of a fishway around Shasta Dam connecting the Sacramento River to its upper tributaries including the McCloud River.  The Twin Tunnels and its companion proposal to raise Shasta Dam by 18 feet would push the remaining salmon runs toward extinction and inundate our ancestral and sacred homeland along the McCloud River,” Chief Sisk stated.
The Trump and Brown administrations and project proponents claim the tunnels would fulfill the “coequal goals” of water supply reliability and ecosystem restoration, but opponents point out that project would create no new water while hastening the extinction of winter-run Chinook salmon, Central Valley steelhead, Delta and longfin smelt, green sturgeon and other imperiled fish species
The project would also imperil the salmon and steelhead populations on the Trinity and Klamath rivers that have played a central role in the culture, religion and livelihood of the Yurok, Karuk and Hoopa Valley Tribes for thousands of years.
The tunnels would divert 9,000 cubic feet per second of water from the Sacramento River near Clarksburg and transport it 35 miles via two tunnels 40-feet in diameter for export to San Joaquin Valley agribusiness interests and Southern California. The project would divert approximately 6.5 million acre-feet of water per year, a quantity sufficient to flood the entire state of Rhode Island under nearly 7 feet of water, according to the lawsuit.
The groups pointed out that this “staggering” quantity of water – equal to most of the Sacramento River’s flow during the summer and fall – would “exacerbate the Delta’s severe ecological decline,” pushing several imperiled species of salmon and steelhead closer to extinction.
Stephan Volker, attorney  for the Tribe and organizations, filed the suit.  The suit alleges that DWR’s approval of the California WaterFix Project and certification of its Environmental Impact Report violates the California Environmental Quality Act (“CEQA”), the Sacramento-San Joaquin Delta Reform Act of 2009, and the Public Trust Doctrine.
“The Public Trust Doctrine protects the Delta’s imperiled fish and wildlife from avoidable harm whenever it is feasible to do so,” according to the lawsuit. “Contrary to this mandate, the Project proposes unsustainable increases in Delta exports that will needlessly harm public trust resources, and its FEIR dismisses from consideration feasible alternatives and mitigation measures that would protect and restore the Delta’s  ecological functions. Because the Project sacrifices rather than saves the Delta’s fish and wildlife, it violates the Public Trust Doctrine.”
Representatives of the fishing and environmental groups explained their reasons for filing the lawsuit.
“The Twin Tunnels is a hugely expensive boondoggle that could pound the final nail in the coffin of Northern California’s salmon and steelhead fishery,” stated Noah Oppenheim, Executive Director of the Pacific Coast Federation of Fishermen’s Associations (PCFFA). “There is still time to protect these declining stocks from extinction, but taking more water from their habitat will make matters far worse.”
Larry Collins, President of the San Francisco Crab Boat Owners Association, stated, “Our organization of small, family-owned fishing boats has been engaged in the sustainable harvest of salmon and other commercial fisheries for over 100 years.  By diverting most of the Sacramento River’s flow away from the Delta and San Francisco Bay, the Twin Tunnels would deliver a mortal blow to our industry and way of life.”
Frank Egger, President of the North Coast Rivers Alliance, stated that “the imperiled salmon and steelhead of the Sacramento and San Joaquin Rivers are one of Northern California’s most precious natural resources.  They must not be squandered so that Southern California can avoid taking the water conservation measures that many of us adopted decades ago.”
Chief Sisk summed up the folly of Brown’s “legacy project,” the Delta Tunnels, at her speech at the “March for Science” on Earth Day 2017 before a crowd of 15,000 people at the State Capitol in Sacramento.
“The California Water Fix is the biggest water problem, the most devastating project, that Californians have ever faced,” said Chief Sisk. “Just ask the people in the farmworker communities of Seville and Alpaugh, where they can’t drink clean water from the tap.”
“The twin tunnels won’t fix this problem. All this project does is channel Delta water to water brokers at prices the people in the towns can’t afford,” she stated.
To read the full story, go to: www.sandersinstitute.com/...
The lawsuit filed by Volkers joins an avalanche of lawsuits against the Delta Tunnels. Sacramento, San Joaquin and Butte Counties have already filed lawsuits against the California WaterFix — and more lawsuits are expected to join these on Monday, August 21.
On June 29, fishing and environmental groups filed two lawsuits challenging the Trump administration's biological opinions permitting the construction of the controversial Delta Tunnels.
Four groups — the Golden Gate Salmon Association (GGSA), the Natural Resources Defense Council (NRDC), Defenders of Wildlife, and the Bay Institute — charged the U.S. Fish and Wildlife Service and National Marine Fisheries Service for violating the Endangered Species (ESA), a landmark federal law that projects endangered salmon, steelhead, Delta and longfin smelt and other fish species. The lawsuits said the biological opinions are “arbitrary, capricious, an abuse of discretion."
On June 26, the Trump administration released a no-jeopardy finding in their biological opinions regarding the construction of the Delta Tunnels, claiming that the California WaterFix "will not jeopardize threatened or endangered species or adversely modify their critical habitat." The biological opinions are available here: www.fws.gov/...
Over the past few weeks, the Brown administration has incurred the wrath of environmental justice advocates, conservationists and increasing numbers of Californians by ramrodding Big Oil’s environmentally unjust cap-and-trade bill, AB 398, through the legislature; approving the reopening of the dangerous SoCalGas natural gas storage facility at Porter Ranch; green lighting the flawed EIS/EIR documents permitting the construction of the California WaterFix; and issuing a “take” permit to kill endangered salmon and Delta smelt in the Delta Tunnels.