Nataanii Means, Dine' Lakota from Chinle on the Navajo Nation, met with members of Parliament in Spain, as Water Protectors from Standing Rock camps concluded their 11 Country Tour of Europe

By Nataanii Nez Means, Dine' Lakota
Censored News
Today we met with MP's from Spanish parliament, asking that they take action with BBVA, a Spanish bank that is invested in fossil fuel extraction on Turtle Island (DAPL and other pipelines). We asked that regulations be made for free and prior informed consent with indigenous nations and also transparency with their investments. I can say that this specific party in Spanish parliament, from my understanding is very new, but is also very progressive with stopping fracking and other destructions of Mother Earth. This isn't my normal course of taking action but I'm learning a lot and education is key in these fights.
So yeah. That was my day. Now I'm in Barcelona, two more days, one more show, and I'm heading home.
I ain't gonna lie, it's was very difficult being in the Spanish Congress knowing the history that has happened in the southwest, and all the other invaded territories they occupied, also the doctrine of discovery. But I've had good conversations with everyone I've talked with. Still, it's difficult.


Nataanii Nez Means, son of Gloria Grant Means of Chinle on the Navajo Nation and Lakota activist Russell Means, performed as a Hip Hop artist on the 11 country tour of Europe, with Rafael Gonzalez, Dakota from Minneapolis. With Waste Win Young, Dakota Lakota from Standing Rock, and Rachael Heaton, Muckleshoot from Washington State, water protectors from Standing Rock camps, urged divestment in Dakota Access Pipeline and fossil fuel extraction, investing in clean energy, and respect for Indigenous rights. While meeting with members of Spain's Parliament, Means urged respect and compliance with the U.N. Declaration of Rights for Indigenous Peoples, which requires free, prior and informed consent before entering the territories of Indigenous Peoples for development.
Congress of Deputies of Spain
The Congress of Deputies of Spain, commonly referred to as simply the Congress of Deputies (Spanish: Congreso de los Diputados; Basque: Diputatuen Kongresua; Catalan: Congrés dels Diputats; Galician: Congreso dos Deputados) is the lower house of the Cortes Generales, Spain's legislative branch. It is located in the Palace of the Parliament (Plaza de las Cortes, Madrid).
It has 350 members elected by constituencies (matching Spanish provinces) by proportional representation using the D'Hondt method. Congressmen serve four-year terms. The President of the Congress of Deputies is the analogue to a speaker and presides over debates.
In the Congress, members of the Parliament from the political parties, or groups of parties, form parliamentary groups. Groups must be formed by at least 15 MPs, but a group can also be formed with only five MPs if the parties got at least 5% of the nationwide vote, or 15% of the votes in the constituencies in which they ran. The MPs belonging to parties who cannot create their own parliamentary group form the Mixed Group. -- Wikipedia
at June 15, 2017 No comments: 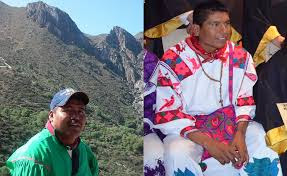 
By National Indigenous Congress
Zapatista National Liberation Army
To the Wixárika PeopleTo the Peoples of the WorldGathered together in the Constitutive Assembly of the Indigenous Council for Mexico at CIDECI–UNITIERRA, Chiapas, the indigenous peoples, nations, and tribes who make up the National Indigenous Congress and the Zapatista Army for National Liberation say to the Wixárika people that we stand together, that your pain and rage are also ours, and that the path of your historic struggle is part of the hope we have as a country and as a world.We repudiate and condemn the cowardly murder of the compañeros Miguel Vázquez Torres and Agustín Vázquez Torres of the Wixárika community of Waut+a- Saint Sebastian Teponahuaxtlán in the state of Jalisco on May 20 of the present year at the hands of the mercenaries of organized crime. This crime could not have happened without the absolute complicity of the bad governments on all levels, given that the riches of the Wixárika lands are coveted by the powers of capital which know no limits and which use their narco-paramilitary groups to try to dismantle an organization as exemplary as that of the Wixaritari.
Read more »
at June 15, 2017 No comments: