I am a descendant of Chief Fire Lightning who was one of the principal chiefs when the Oglala settled the Pine Ridge Reservation.
I come from a long line of traditional family and Treaty people and was given a good upbringing.
In 1887, when the Allotment Act was passed, Chief Fire Lightning was given the land where the mass murder took place. After the massacre of our relatives, the U.S. government asked Fire Lightning if they could bury them on his land and he said, “Yes. Those are our relatives.” My maternal grandfather, Alec Ice was a well-respected person and as a Full Blood he owned a small ranch and was self-sufficient and a devout Treaty person. Growing up as a child there were many Treaty meetings held at my grandpa’s house and I remember many old chiefs and old traditional people.

Tony Black Feather, Lakota, on the Stronghold in 2002 -- speaking out about the American flag, racism, the Black Hills and Iraq
Censored News new series 'Racism in America'

By Brenda Norrell
Censored News
(Oct. 1, 2002) STRONGHOLD TABLE, S.D. Lakota elder Tony Black Feather told the United Nations that the American flag represents a racist nation that violates natural and spiritual laws, dishonors treaties and engages in a game plan of corporate greed.
In his statement delivered to the United Nations and distributed here on Stronghold Table, Black Feather pressed for disarmament and peace as President Bush pressed for war in Iraq.
Urging America to “come clean in the eyes of the world,” Black Feather said people often ask him about the red, white and blue of the American flag
“I tell them that the aboriginal Lakota people of this country look at this flag as a piece of red, white and blue cloth that stands for the foreign racist system that has oppressed Indigenous peoples for centuries. 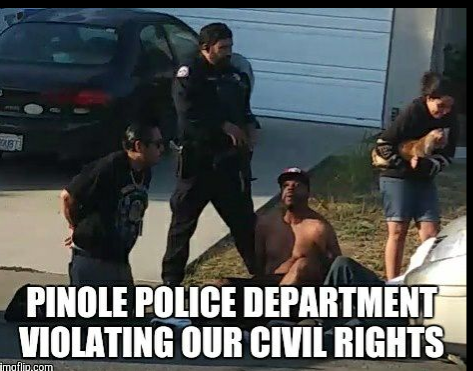 Quanah Parker Brightman, Lakota and son of Lehman Brightman, founder of United Native Americans, describes the harassment and false identification of him, and his friends, by police in Pinole,Calif. Across America, this type of out of control police action, illegal search and seizure, targeting of activists, and terrorizing of innocent people have led to tragedies, false arrests and murders of innocent people by police who are either out of control, fail to obtain the facts, or are targeting activists. -- Censored News

PINOLE, Calif -- (Aug. 17, 2017) Not Feeling too good after my friends and I were the victims of harassment by Pinole Police Department.
The Police detained us at gun point in handcuffs. The Police never read us our Miranda Rights. Searched us for Guns. The Police claimed that someone driving a white van pointed a gun at someone. Even though we were in my friend's garage and not driving. They also raided my friend's home illegally. They searched us for weapons and came up with nothing.


You can clearly hear a Pinole Police Officer order innocent people whom were filming the incident into their homes or face arrest.
Grateful for our Community who Video Recorded Pinole Police Department violating our Civil Rights.
Watch video below.
Quanah Parker Brightman is the son of Lehman Brightman, founder of United Native Americans, who recently passed to the Spirit World.