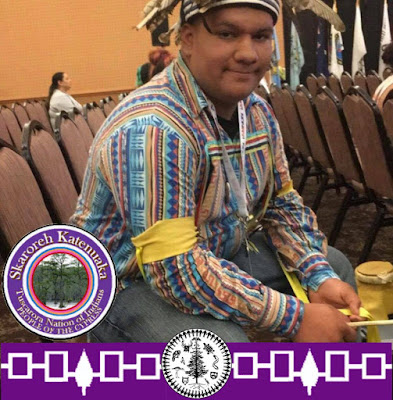 Marcus Bullard, 18, Wolf Clan and an enrolled member of the Tuscarora Nation of the North Carolina Territory, is an active citizen of the Prospect Long House. Marcus was exercising his rights as an Indigenous grassroots member of the Tuscarora Nation, when he was charged for hunting without a license on October 4, 2017.
"I was charged with two charges of doing water fowl hunting with no license and hunting on trespassing land -- but it is Indian land," Marcus told Censored News.
"As an Indigenous Native we are entitled to hunt and fish without having to have a license to do so."
"This is another example of how the State of North Carolina genocides against the Tuscaroras by not respecting our Indigenous rights."
"As Indigenous people the State has no jurisdiction over our rights. Tuscarora are a State amongst themselves for we are sovereign. This is a matter for a Federal court to decide since we are of a Sovereign Nation."
"The wildlife officer was white and asked me if I have a hunting licence. I said, "No I am Native American. I am Tuscarora of North Carolina."
"I told him I don't have to buy a fishing and hunting license. He said he never heard of it. So I showed him my tribal card. He said it was only good on Indian land. He wrote me a ticket and told me since I showed him full respect, and did not lie about anything, he said if I went and purchased a hunting license, and went and got permission to hunt the land, that he would make sure it was thrown out of court."
"This has happen to many people in my tribe, but I am the youngest. This has happen to me and many others are taking it as harassment," Marcus said.
Marcus' court day will be Nov. 28, 2017 at Robeson County Courthouse, 500 North Elm St, Rm 101, Lumberton, NC 28359.
A support statement for Marcus states, "We feel that Marcus’s rights as a Free Sovereign Individual has been violated.  If you would like to stand with Marcus or would like to contribute towards his legal defense it would be deeply appreciated.  He needs all the prayers and support by people as much as possible."
"Marcus Bullard is exercising his inherent sovereign right to hunt and fish on Indian lands. The Tuscarora Nation holds firmly that this issue is not under the jurisdiction of the local court system, rather the federal court system."
The United States Constitution mentions Native American Tribes three times:
Article 1, Section 2, clause 3
Article 1, Section 8
The Fourteenth Amendment, Section 2
As sovereign nations the federal government has a “duty to protect” the tribes, suggesting the essential legislative and executive authorities to effect that duty.
The Marshall Trilogy, 1823-1832
Menominee Tribe v. United States, 391 U.S. 404 (1968)
Please extend your support to Marcus as he stands for his rights.

Marcus Bullard on Facebook
https://www.facebook.com/marcus.bullard.9849
at November 09, 2017 No comments: