NEW YORK -- Broadcast live from the U.N. Permanent Forum on Indigenous Issues event, LaDonna Allard of Sacred Stone Camp, describes how the youths at Standing Rock used social media, and ran across the country, and launched the resistance to Dakota Access Pipeline.

LaDonna, among those on the panel, describes the attack on Sept. 3, 2016, and how the water protectors were maced. She stood out in the middle of the attack dogs. "Blood was running from his mouth," she said of one of the attack dogs. "The young men came with their horses, and put their horses between us and the dogs."
She always thought the laws of the United States are just.
At that moment, she realized no, the laws of the U.S. are not just.
"I am really angry.  I watched some really good people get hurt."
The militia groups came, the military came.
They were shooting people, macing people.
Percussion grenades, water cannons.
"I watched very amazing young people stand up in prayer, ceremony and song."
The police engaged in military strategy.
Then, they brought in the military, attacking people, and they began the propaganda.
The newspapers carried the propaganda.
"That's when I realized money buys everyone's souls."
She said there is no law by these corporations.
"You don't have a right to build a pipeline outside my home," she said.
"Someone has to show me America is a just system."
Speaking of her Dakota ancestors, LaDonna said, "We never had a conflict with America, and you came and killed us anyway."
She describes how officials came to take her land.
"How many times do I have to start again in my home."
LaDonna said she knows the history of the land for 10,000 years.
"I have the roots growing right out of my feet."
"I will stand until I die there."
Indigenous Peoples are holding on for the world, she said of the protection for all liing things and Mother Earth.
"We want the world to live."
"There's no more time."
"It is now you must stand up."


Video above by Cultural Survival Michelle Cook (Dine’) speaks about Standing Rock! "We are asking for a Truth and Reconciliation Commission regarding Standing Rock...Media plays a role in the criminalization of Indigenous Peoples because it desensitizes people."

Michelle Cook, Dine' attorney and panelist, was among those who went to stand with LaDonna.
"We are going to keep fighting for justice," Michelle said during her presentation.
Michelle describes how she helped begin the Water Protectors Legal Collective, in an army tent at Standing Rock.
She describes how helicopters circled overhead, and there were children in the camp, with nothing more than feathers and prayers to protect them.
Michelle tells how water protectors are in jail, and some are waiting trial or sentencing.
Since Standing Rock, there have been 58 bills introduced to deny free speech and assembly.
Who pays for it? Energy Transfer Partners gave $15 million to North Dakota.
If we can not find justice in the United States, we need to go to the international justice system, Michelle said.
While at Standing Rock, Michelle received death threats, but the threats only made her more determined.
"We have also been going to the banks," she said, describing the divestment efforts of the financial institutions who invest in Dakota Access Pipeline and fossil fuels.
Now, Michelle asked how water protectors can seek help for post traumatic stress syndrome.
In the report just released, attorneys urge that criminal charges be dropped against water protectors, and there be reparations for victims.
She also describes the role of the media.
"We have to create our own media," she said, adding that the media has been compromised.
"We are threatened with extinction."
Indigenous Peoples are the ones protecting the land.
"That is who I am."
"We realized who we are."
Now, she said, "We need action."
Michelle said she is thankful for what has happened.
"It changed my life for the better."
"We are not going to give up."
"We are going to work harder."
The report, “Indigenous Resistance to the Dakota Access Pipeline: Criminalization of

Dissent and Suppression of Protest,” makes the following recommendations: 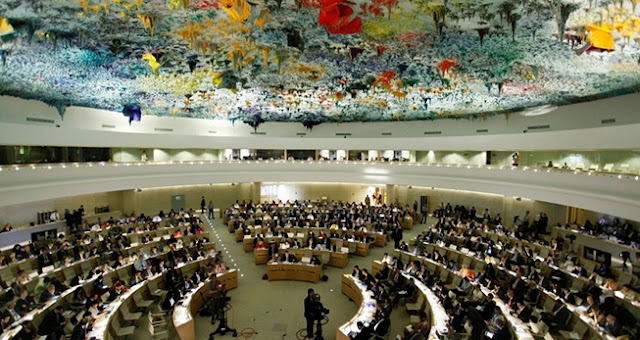 By Indigenous Peoples Law and Policy, University of Arizona
Event: Thursday, April 19, 2:45–4 PM
United Nations Secretariat Building, New York
(Room S-2725 BR)
IPLP is convening a panel of experts to discuss the criminalization of peaceful protest as part of United Nations Permanent Forum on Indigenous Issues (UNPFII). The event is titled “Dakota Access Pipeline Resistance and the Criminalization of Indigenous Human Rights Defenders,” and takes place April 19, 2:45–4 PM PM at the United Nations Secretariat Building (Room S-2725 BR).
The event will feature leading human rights scholars and activists who will discuss the criminalization of indigenous activists and the need for protection of indigenous human rights defenders worldwide. If you are attending UNPFII, join IPLP for a critical discussion on the criminalization of indigenous human rights defenders worldwide.
The panelists for the event are:
Victoria Tauli-Corpuz (United Nations Special Rapporteur on the Rights of Indigenous Peoples)
Victoria Tauli-Corpuz is an indigenous leader from the Kankanaey Igorot people of the Cordillera Region in the Philippines. She is a social development consultant, indigenous activist, civic leader, human rights expert, public servant, and an advocate of women's rights in the Philippines. She was the former Chair of the UN Permanent Forum on Indigenous Issues (2005-2010). As an indigenous leader she got actively engaged in drafting and adoption of the UN Declaration on the Rights of Indigenous Peoples in 2007. She helped build the indigenous peoples' movement in the Cordillera as a youth activist in the early 1970s. She helped organize indigenous peoples in the community level to fight against the projects of the Marcos Dictatorship such as the Chico River Hydroelectric Dam and the Cellophil Resources Corporation. These communities succeeded in stopping these.
Elifuraha Laltaika (Member, United Nations Permanent Forum on Indigenous Issues)
Elifuraha Laltaika is the executive director of association for law and advocacy for pastoralists (ALAPA) and a law lecturer of Tumaini University Makumira (Arusha, Tanzania). He previously served as a Harvard Law School visiting researcher. He holds a Doctorate in Law from the University of Arizona Indigenous Peoples Law and Policy Program. Elifuraha is an expert member of the United Nations Permanent Forum on Indigenous Issues (UNPFII) and a member of the Tanzanian national Bar association (Tanganyika Law Society). Mr. Laltaika has 10 year’s experience working on indigenous peoples’ issues, including as senior fellow at OHCHR in Geneva. He is currently employed as a Lecturer in Law in Tanzania.
Seanna Howard (Professor, University of Arizona, Indigenous Peoples Law and Policy Program)
Seánna Howard teaches International Human Rights and Indigenous Peoples and the International Human Rights Advocacy Workshop. Professor Howard has been with the Indigenous Peoples Law and Policy Program since 2006, representing indigenous communities on precedent setting cases before the Inter-American and United Nations human rights systems.
Carla Fredericks (Professor, University of Colorado, Boulder School of Law)
Carla Fredericks is Director of the American Indian Law Clinic and Director of the American Indian Law Program (AILP), which serves as the umbrella organization for Colorado Law's academic, practice-focused, and community outreach activities in American Indian law.  She is a graduate of the University of Colorado and Columbia Law School. At Colorado Law, Fredericks leads a year-long clinic in which students have the opportunity to represent American Indian tribes, organizations, and individuals in a variety of matters, designed to ready students for the complexities of general counsel work. Fredericks is also of counsel to Fredericks, Peebles and Morgan LLP, where she focuses on complex and appellate litigation and Native American affairs, representing Indian tribes and organizations in a variety of litigation and policy matters.
LaDonna Brave Bull Allard (Sacred Stone Camp Founder)
LaDonna Brave Bull Allard is a mother, Lakota historian, land-owner along the Dakota Access Pipeline route, and the founder of Sacred Stone Camp, the first prayerful resistance camp opened as part of the movement to halt the Dakota Access Pipeline near the Standing Rock Indian Reservation in North Dakota. By December 2016, more than 10,000 Indigenous people and environmental activists were camping in the area on and around LaDonna’s home. She has been a major catalyst and leader in the Standing Rock movement, which has become the perhaps the largest ever intertribal alliance on the American continent, with over 200 Indigenous nations represented. With most Standing Rock defenders now departed from her land - LaDonna remains as a ceaseless voice for her people, the Earth and the water - sharing her story and calls to action at platforms around the world as she continues to advocate for justice. Allard is an enrolled member of, and former historical preservation officer for, the Standing Rock Sioux Tribe. Her people are Inhunktonwan from the Jamestown Valley, Hunkpapa and Blackfoot.
Michelle Cook (SJD Candidate, IPLP)
Michelle Cook is an indigenous human rights lawyer and SJD candidate at Arizona Law’s Indigenous Peoples Law and Policy (IPLP) Program. She is writing her dissertation on international law, indigenous people’s human rights, gender, sexuality, and indigenous transnationalism. She is a founding member of the Water Protector Legal Collective, the on-the-ground legal team which provides legal services to those arrested at the Standing Rock encampment.
Kanyinke Sena (Member, African Commission on Human and Peoples’ Rights)
Kanjinke currently serves as Member of the Working Group on Indigenous Populations/Communities in Africa (Working Group). A member of the Ogiek indigenous community of Kenya, Kanyinke is a long-time advocate for inclusionary approaches to conservation policy and indigenous peoples’ rights in Africa. He currently serves as a Professor of Law at Egerton University in Kenya. Prior to his role as Member of the Working Group, Kanyinke served as chair of the United Nations Permanent Forum on Indigenous Issues from 2013–14.
Posted by Censored News, publisher Brenda Norrell at April 20, 2018