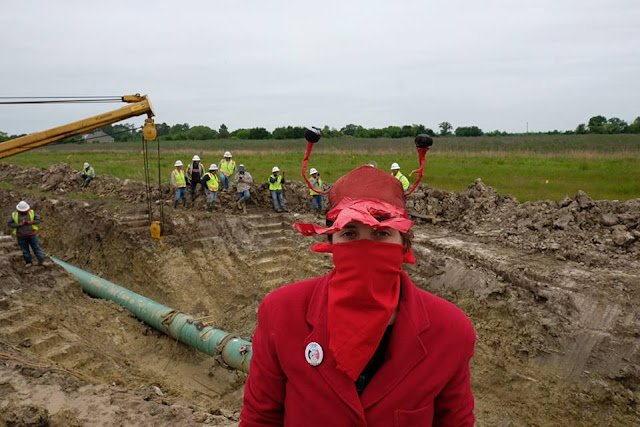 CROWLEY, LA -- On the morning of April 9th, over a dozen water protectors from the L'eau est la Vie resistance camp shut down the welding of pipe on a construction site of the Bayou Bridge pipeline for several hours. Dressed as crawfish and Kelcey Warren, the CEO of Energy Transfer Partners, the group performed a humorous musical while blocking pipeline workers from accessing machinery to carry out their work for the day. The performance was so enthralling that even the pipeline workers couldn't pull their eyes away from the scene or hold back from laughing.After holding the space for multiple hours and receiving a dispersal order, the group headed east to another part of the pipeline easement in Maurice, LA and halted work on a site with a horizontal directional drill until being threatened with arrest.The craw clan struck hard and slowed down both welding and horizontal directional drilling work, which are two of the most expensive components of the construction process, in one day. The group took action to draw attention to the 700+ waterways including the Atchafalaya Basin and much of Louisiana's only remaining natural crawfisheries that will will be impacted by the pipeline."The Bayou Bridge Pipeline is the southern end and last remaining part of the Dakota Access Pipeline, the ETP project that sparked mass resistance in Standing Rock in 2016 " said Mary Anne Mudbug, one of the crawfish in the performance. "The Craw Nation has raised its' claws in solidarity with those who took a stand against Energy Transfer Partners in so called North Dakota and has vowed to continue that fight here in the swamps".For more than a year, a coalition of Louisiana landowners, crawfishermen and public interest organizations have battled against the Bayou Bridge pipeline for many reasons. Some focus on the threats to drinking water, environmental contamination, and the continued desecration of critical wetland ecology within the Atchafalaya Basin. Others are worried about the pipeline's spill potential since its parent company, Energy Transfer Partners, has registered the worst spill record of all US pipeline operators, responsible for 317 incidents in the past 11 years and causing over $64 million in private property damages.Another crawfish, Wanda Waterpinch said, "We call out for all members of the animal nations across Turtle Island to rally in the swamps alongside us in a last stand against this violent infrastructure project that saw its beginning in the plains of Lakota territory two years prior. Join us!"
Posted by Censored News, publisher Brenda Norrell at April 09, 2018