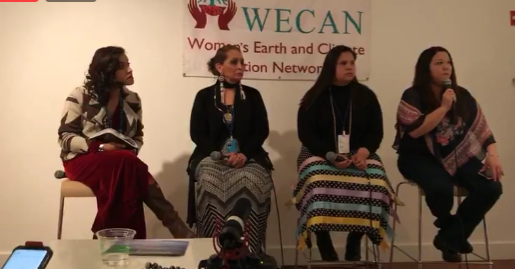 Tokata Iron Eyes, 14-year-old Dakota, is among youths who first brought attention to Dakota Access Pipeline threatening Standing Rock. "We are the new generation.""We are going to change the world.""The only enemy that we have is ignorance.""No one knows what they are doing right now, because they will hide it from us." LaDonna BraveBull Allard.
"We must empower ourselves. We have a right to live.""It is about the right of our Mother Earth. It is about the Spirit of the Water.""What is happening is ethnic cleansing." Michelle Cook, Dine' "We have all been lied to."
"We are not going to be lied to anymore."


"We are using and abusing the land." -- Kandi Mosset, Hidatsa, Mandan, Arikara, urging alternative energy. Corporations are not providing the alternatives the people are demanding.

FEATURING:Kandi Mossett (Mandan, Hidatsa, Arikara; Lead Organizer on the Extreme Energy and Just Transition Campaign with the Indigenous Environmental Network)Michelle Cook (Diné; human rights lawyer)Gloria Ushigua (Sápara; President of the Association of Sápara Women, Ecuador)LaDonna BraveBull Allard (Lakota historian, member of the Standing Rock Sioux Tribe and founder/landowner of Sacred Stone Camp, North Dakota)Tokata Iron Eyes (Hunkpapa and Oglala Lakota from the Standing Rock Reservation; Youth Advisor for the Standing Rock Sioux Tribe; Youth Advisor for Sacred Stone Village; Administrator for Last Real Indians)Thilmeeza Hussain (Former Deputy Ambassador to the UN from the Maldives; WECAN Advisory Council Member; Founder of Voice of Women, Maldives)Event moderator, Osprey Orielle Lake (Founder and Executive Director, Women's Earth and Climate Action Network, WECAN International)ABOUT: As a result of the dangerous intersection of colonialism, racism and patriarchy, Indigenous women around the world are impacted first and worst by the effects of environmental destruction and a rapidly changing climate. However despite all odds and against great challenges, it is these very same Indigenous women who are rising up, challenging the status quo, holding a vision, and taking action to build the vital solutions needed for a just and livable future.
.

Mirian Cisneros (President of the Kichwa Pueblo of Sarayaku, Ecuador) "This struggle is about the women." "Those who began the struggle are no longer with us, but their spirits are with us." Mirian is speaking of the transnational companies, the extraction, oil, mining, and logging, endangering the Amazon.
Thilmeeza Hussain (Former Deputy Ambassador to the UN from the Maldives; WECAN Advisory Council Member; Founder of Voice of Women, Maldives) She describes how climate change is impacting her island. "It is climate genocide."
Gloria Ushigua (Sápara; President of the Association of Sápara Women, Ecuador) Gloria said she is not afraid to fight Ecuador. Her people are being killed quietly in the Amazon.
at April 21, 2018