Before Daniel Deschinny, spokesman for the Dineh Spiritual and Cultural Society, passed to the Spirit World, I had the great honor of interviewing him many times.
Dan, who died far too young, often met me for coffee at the Navajo Nation Inn, and asked me to share the statements of the Dineh Medicine People.
Many times Medicine People would join us, including Thomas Morris, who has now passed to the Spirit World. Before this, the Dineh Spiritual and Cultural Society was known as the Navajo Nation Medicine Man's Association.
In 1994, Daniel shared these words below on healing one's self, on behalf of the Dineh Spiritual and Cultural Society, regarding healing, and the dangers of misusing the Dineh ceremonies, ceremonial images and healing practices.
Dan, sharing their message about singers, often referred to as medicine men, said: 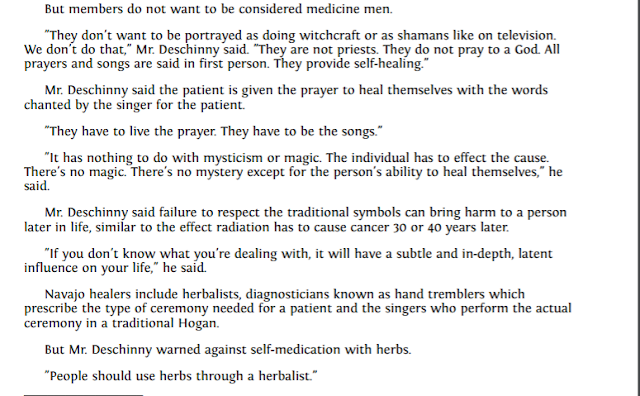 At the same time, Dan, speaking on behalf of the Dineh Spiritual and Cultural Society, said symbols from ceremonies should not be used in public.
They asked that all depictions of the masked figure of Ye'ii Bicheii, lightening, sandpainting, herbs and other symbols be removed from public art.
Daniel said the ceremonies are still practiced and harm can result from sharing the images. Daniel warned that the Ye'ii Bicheii mask should not be used as art and can not be placed on an image. It can only be placed on a human body.
----

Notes:
Thank you to Brent Michael Davids for sharing this print copy, long before the days of the Internet. Thank you also to Tim Giago, Lakota publisher, who created Indian Country Today Southwest, and my editor Avis Little Eagle, Lakota, who made this work possible in 1994.
Here are Daniel's words on behalf of the Dineh Spiritual and Cultural Society.
In memory of Dan Deschinny, 1943 -- 1997.
.

Article copyright Brenda Norrell
Portions may not be republished without permission, or
used in connection with any revenue schemes.