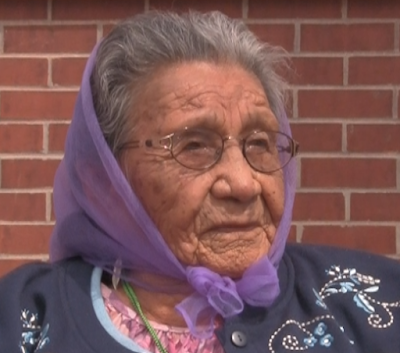 February 15, 2018.  On the morning of February 12, 2018, Oyate Wyokb Win (Lakota) or Lorraine Cecilia Martin (english), the fierce matriarch of the Tetuwan Lakota Oyate on Pine Ridge Reservation and last living Grandmother of the American Indian Movement (AIM), passed over into the Spirit World near Custer, South Dakota in Lakota Territory.
She had recently told her grandchildren she was tired and it was her time to go. She was at least 98 years old but was thought to be considerably older since records were not kept at the time of her birth.
She left behind many grandchildren and great-grandchildren and touched the lives of many more Lakota people.
Two wakes will be held for Cecilia.  A wake in Pine Ridge will start at 10:00am on February 18th at Billy Mills Hall. The following day on February 19th, a wake will start at 10:00am at Our Lady of Lords parish hall in Porcupine Community. Her burial will occur the following day next to her home in Porcupine.  Oyate Wyokb Win was the matriarch of the Lakota Cante Tenza or Strong Heart Warrior Society and the warrior society will be handling the memorial events.
EARLY LIFE
Oyate Wyokb Win was born in Porcupine Community to mother Grace Little Crow, descendent to Fort Laramie treaty signer Little Crow, as well as Crazy Horse's wife Black Shaw.
Her father Paul Moose was descended from the fierce warrior No Ears, who was killed in the 1890 Wounded Knee Massacre and lies buried at the Wounded Knee Memorial.
Cecilia lived her early years in Porcupine but in 1929 was stolen from her home in Porcupine and placed in the Holy Rosary Mission Boarding School where she faced heinous abuse by Catholic missionary nuns.  She struggled with the legacy of boarding school abuse throughout her life but never gave up Wolakota - the Lakota language and way of life.
She had three brothers and four sisters including her brother Bill who drove for the infamous bank robber John Dillinger, and brother Charlie who was a well-known horse jockey.
Following her marriage to Roy Martin, she lived in Slim Buttes on Pine Ridge.  In addition to raising three of her own children, she raised children from other families. She also worked with Roy to help bring customary Lakota justice to the reservation.  During this time she was recorded as an expert marksman and still holds the record for longest bull's-eye with a snub-nose 38 revolver in the state of Nebraska.
ACTIVISM
Like many of those traditional Lakota born during the late 1800s and early 1900s, she was active in resistance to white racism and colonialism in Lakota Territory.
In 1969, Cecilia and her family joined Bob Yellow Bird and other Lakota elders in Crawford, Nebraska to protest the threatened desecration and destruction of Crazy Horse's burial site by a cement corporation. This protest was among the first in the series of increasing militancy and activism by Lakota and other Indigenous activists following years or discrimination and mistreatment at the hands of white America.
In 1970, she and many in her family were part of the group led by Lehman Brightman, Minnie Two Shoes, Archie Fire, and Dennis Banks in a three month takeover of Mount Rushmore to protest treaties broken by the United States Government and the takeover by the U.S. Park Service of sacred Lakota land.
Following the 1972 take-over of the Pine Ridge Indian Reservation by Dickie Wilson and his private militia known as Guardians of the Oglala Nation (GOON Squads), in February 1973, Cecilia joined Russell Means, Frank Fools Crow, Dennis Banks, and about 200 AIM and grassroots Lakota in the 71 day occupation of Wounded Knee community.
In the years following Wounded Knee, Cecilia became known for her fiery attacks on the discrimination faced by traditional and grassroots Lakota Oyate and the corruption by the Bureau of Indian Affairs supported Oglala Sioux Tribe (OST).  In 2000, she helped lead the occupation of the Red Cloud Administrative Building in attempts to uncover evidence of mass fraud and embezzlement that was impoverishing poor Lakota Oyate in the outer districts.
Again in 2011, she helped lead the 34 day occupation of the Porcupine Elderly Meals Building to protest  mistreatment by program staff,  unsafe building conditions, and food served to elders that contained insects and mouse droppings. Promises to replace the condemned building by the OST were never honored and Cecilia openly questioned what it would take for the elders in Porcupine to be treated with dignity and respect.
In 2012, she joined other Lakota grandmothers in formally charging the Oglala Sioux Tribe Tribal Council with elder abuse, neglect, and chronic mistreatment due to lack of food, housing, and support. Their complaint was illegally rejected and tribal laws against elder abuse were ignored to protect tribal officials.
Despite the lawless and corrupt nature of OST government and the inhuman conditions it created, Oyate Wyokb Win continued to call tribal offices and attend Tribal Council meetings in support of the grassroots Oyate. She provided inspiration to younger grandmothers and grassroots Lakota people and could offer a wry laugh and twinkling eye when amused.
APPEARANCE IN MOVIES
As a well-known and steely activist of the people, Cecilia was featured in the documentaries 500 Nations (1995), Battle for White Clay (2008), Pine Ridge: Beauty and Despair (2011), and Red Cry (2013). During Red Cry, Cecilia described the inhumane conditions faced by traditional and grassroots elders on Pine Ridge, "It's like we are living in hell, the way things are."
Cecilia also appeared in the dramatic mystery film Thunderheart (1992), a fictional, loosely based portrayal of events relating to the Wounded Knee incident in 1973.
LATER YEARS
Repeated mistreatment and neglect of elders by the Oglala Sioux Tribe took its toll and Oyate Wyokb Win's health waned during her last few years. Never comfortable speaking the english language, she said before she died, " I want to be remembered as someone who held on to language and tradition."

###
The Independent Lakota Nation continues the inter-generational movement to assert Lakota independence and grows from past efforts by Lakota chiefs, elders, treaty councils, and more than 165 years of resistance to illegal settlement on unceeded Lakota.
at February 16, 2018 No comments: