Resistance Gathering on the Oglala Homeland 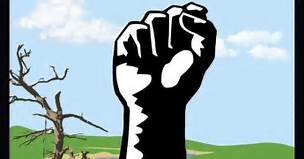 Resistance Gathering On The Oglala Homeland
by Lakota Media Project with a partial reprint from Lakota Country Times article by Natalie Hand
Censored News
The “Gathering on the Homeland: Solidarity, Decolonization and Celebrating Acts of Resistance” is a two-day event being held in the heart of native resistance in Indian Country, the Oglala Lakota Nation on February 24 and 25, 2018 at the Wounded Knee School in Manderson, South Dakota."Along with the beauty and power of 10,000 people coming together in 2016-17 along the riverbanks at Cannon Ball, North Dakota, we experienced the chaos that emerged, as it became apparent that the understanding of MOVEMENT was as diverse as the people gathered there. We have brought together folks from many Red Nations and allies from the four directions who have led, founded, and/or participated in movements in order to examine, explore, and discuss how their experience can teach young emerging social change makers, community leaders, students, families, and our youth,” stated Wioweya Najin Win (Debra White Plume), event Co-Organizer and Director of Owe Aku.What does the frontline of Non-Violent Direct Action at Cannon Ball, North Dakota have in common with hip hop music? or Resistance Art for Youth? or the formation of an Indigenous Resistance Media Network? or Idle No More? or serving as Medic or Legal Observer?"Many paradigm-shifting experiences along the river banks felt by thousands of people from all walks of life have resonated throughout the world since the camps were closed and the structures burned. There was such an awesome and truly special fire ignited from that spark of energy inside all of us on the frontline, that many people have expressed an urgent need to gather, pray, discuss, debrief, and learn together from our experiences there. We decided to pull together people who have past experiences that not only fuel and inspire their current ongoing work, but whose historical presence merges into today's organizing and change-making work to help provide a framework for young organizers and change-makers to learn from. They will present a panel discussion entitled "What Is Movement?" on Sunday beginning at noon. Some of the presenters gained their first and only experience at the river, some have been at this work for years, some for decades. We have been working at great risk to empower and shape a generation in this racist and punitive country, but we are willing to continue to take that risk. We have put together this two-day event to provide a forum for such teachings through art, music, dialogue, brainstorming, and prayer with the best energy we have for our younger generations," continued White Plume. Nina Waste, co-founder of Idle No More is the keynote speaker for this panel discussion.Native Artists In Action, an indigenous collective from New Mexico and Arizona will host a youth workshop Saturday afternoon to create art that teaches not only art skills, but the philosophy of art and the preservation of ancient lifeways. There are also a number of native musicians coming to perform a free youth concert on Saturday night, who promote an alcohol/drug-free lifestyle as well as using music to inspire youth to reclaim their ancestral identities. Native musicians will debut recent single and CD releases at the concert, including Nataanii Means and Tracy Bone."Our youth need to know that there is music in the world created by Indigenous people that carries the truth of their message of overcoming the genocide of the big world, the alcohol, drugs, and violence to women. It is a voice of resistance and of proudly and loudly reclaiming native identity and celebrating that decolonization," said Olowan Martinez, co-organizer of the event. "The artists coming here to work with our youth have been doing this for a long time, and bring a special talent to working with youth."The "GurREALla Media, Do's and Don'ts on the Frontline" film forum and training beginning at noon on Saturday is extremely necessary in today's world of social media and the immediate internet that connects people around the world. When do you put your camera down? What do you do when arrested and film is conficasted? What does guerrilla media really mean? Filmmakers will show their video shorts and feature-length films and discuss their work, and their risks, and be available for Q and A with workshop participants.Organizers state that the event is being held in conjunction with the 45th Anniversary of the 1973 Liberation of Wounded Knee. Through the past 45 years the annual celebration has enjoyed pow-wows and feasts, but very little has been done in terms of educational experiences and/or solidarity building for the long term work ahead of Red Nations, so this event is designed for the Oglala Oyate and their nearby sister nations on the Rosebud, Cheyenne River, Crow Creek, Lower Brule, and Standing Rock Homelands but all of the Oceti Sakowin are encouraged to attend and participate. Organizers have stated that all people from all walks of life are encouraged to attend, especially past and current allies and accomplices. The event poster states "No Feds, Informers, Infiltrators, or TigerSwan" as part of the security culture the organizers observe.Beverages during breaks, and evening meals will be provided as part of the Lakota way of life, and security will be present throughout the event. People are encouraged to bring their own eating utensils if possible, in order to minimize the amount of trash that will need to be hauled out of the Wounded Knee School in Manderson, which has so graciously provided space for the event.The "Gathering On The Homeland" two-day event is hosted by Owe Aku (Bring Back the Way) and the Red Robin Hood Fund. Please contact Olowan Martinez at 605-407-138. Please visit www.oweakuinternational.org to learn more about the work of Owe Aku.
at February 18, 2018 No comments: 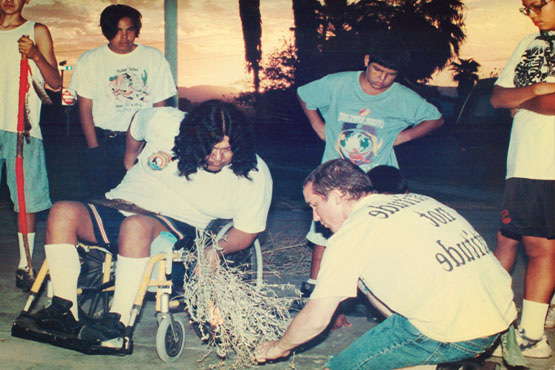 Faced with nuclear genocide, the poisoning of the Colorado River, and the destruction of the homeland of the remaining Desert Tortoises, Native Nations stood in Ceremony on the frontline to halt forced removal from Ward Valley.