The Last Oil -- Gwich'in Sarah James 'No Oil, No Compromise' in Sacred Place Where Life Begins

As with the Rebirth of the Nation in 1988, Gwich'in today are again threatened, and proclaim, 'No Oil. No Compromise.'

ALBUQUERQUE -- Sarah James, Gwich'in, today is carrying forward the message of the Chiefs, "No Oil. No Compromise," and remembering the humble way of life of the Gwich'in.
Arriving in Albuquerque for The Last Oil symposium, Sarah comes from the Sacred Place Where Life Begins.
It is the Gwich'in homeland, the land of caribou, home to the Arctic National Wildlife Refuge.
Speaking at today's symposium, Sarah shared how her family hunted the caribou, and took only what they needed, using all parts of the caribou.
"I grew up on needs, not on greed," said Sarah, winner of the Goldman Environmental Award, who was inducted into the Alaska Women's Hall of Fame.

Acoma Petuuche Gilbert opens The Last Oil symposium in New Mexico, the home of U.S. nuclear bombs, with words of prayer and respect for all life.

ALBUQUERQUE -- Petuuche Gilbert, Acoma, opened The Last Oil symposium, with prayer and a call for peace and respect, while questioning why the United States continues to build nuclear bombs to kill the people of the world.
"How do nuclear bombs really make America great?" Petuuche asked, as he opened the three-day Last Oil symposium, that continues with 26 speakers at the University of New Mexico,  through Friday night.

Petuuche said the nuclear power industry began here in New Mexico.
"Why do we want to continue the nuclear bombs to destroy other people, to kill other people," he asked.
New Mexico, and the Pueblos are not just the home to the nuclear power industry, but the region continues to be home to the scattered radioactive tailings left from Cold War uranium mining.
Petuuche began his opening comments by explaining that Spaniards saw the communities here when they came, which were like those in Europe, and used the term 'Pueblos' to describe his people.
"We are still here," he said, of Acoma, among the Nineteen Pueblos.
"We welcome you here. We welcome you here to visit us."
Etched on the rocks at the Petroglyphs National Park are the "handiwork and handprints of our ancestors," he said.
Chaco Canyon is definitely related to Acoma, and Mesa Verde is another place where his ancestors were.
"We are ancient here," he said, speaking of the longevity of the Pueblo people.
When Chinese came to visit his homeland, he told the group, "Finally two ancient people meet again."
"We're still here today," Petuuche said during the opening of The Last Oil.
Welcoming visitors to his home, he said, "Do come to visit Acoma."
Petuuche spoke on environmental activism, and the peoples concerns for each other, the land, water and air that is around them. He said that Indigenous ideology can contribute to the saving of mankind.
"As humans, we are all connected."
"We are all Indigenous to this globe, we are all Indigenous to Mother Earth."
Petuuche works with an organization in the Grants, New Mexico, area, an area where there was 50 years of uranium mining.
"We are still trying to clean up radioactive mines and mills." He said it has affected the land, water and lives of people.
The whole development of nuclear power really began here in New Mexico, he said.
Petuuche said when he heard of this conference, The Last Oil, he wondered if Sen. Tom Udall would be present.
"I really wanted to kind of confront him."
"What we see here in New Mexico is the dependency on nuclear energy."
He said the "all mighty dollar" is used to fund the Sandia National Laboratories and Los Alamos National Laboratory.
Petuuche said he has questions to ask Sen. Tom Udall.
"I wanted to ask how nuclear bombs really make America great?"
"Why do we want to continue the nuclear bombs to destroy other people, to kill other people."
Petuuche said the plutonium pits, plutonium triggers, are still manufactured in New Mexico to detonate atomic bombs.
Today, he said the term used is "smart bombs," called low-yield nuclear weaponry.
"A lot of this research still goes on," he said of the nuclear industry at Sandia National Laboratories in Albuquerque, and at Los Alamos National Laboratory.
The United States is increasing its nuclear arsenal, with more expenditures. Now, the U.S. Congress is budgeting $1.2 trillion over the next 30 years.
"Why doesn't this money get expended for health, education and  infrastructure, instead of building this nuclear power of the United States?" he asked.
Petuuche said at conferences like this, dialogue is important, and the issue of being respectful -- not just the respect of humans to humans, but humans to the land, the environment -- the air, land and water.
Petuuche spoke of the inter-relatedness of all life.
"Climate change is a big part of that, the human impacts of causing that."
Urging understanding, he pointed out that it is the responsibility of all people.
"We are all somehow contributing to that."
"We all need to understand that."
Indigenous Peoples realize the need for being spiritual.
"All the natural things on the land are gifts for humans to use."
Speaking on the relationship of Indigenous Peoples to the natural world around them, he said, "It was always a peaceful and respectful relationship to the land, water, air, wildlife and animals that are here -- our place in this universe."
Petuuche said the opening prayer he offered for The Last Oil conference, is meant for all people, and the wildlife.
At Acoma, religious leaders are there for prayer.
Today, as with every day, on the Rock of Acoma, great leaders went out to pray, for everyone, for their families.
"Their prayer was that we have peace and respect, and that we be able to maintain this beautiful way of life."

At The Last Oil, Gwich'in David Solomon: 'Rise Up and Defend the Arctic and Caribou'
https://bsnorrell.blogspot.com/2018/02/the-last-oil-gwichin-david-solomon-rise.html 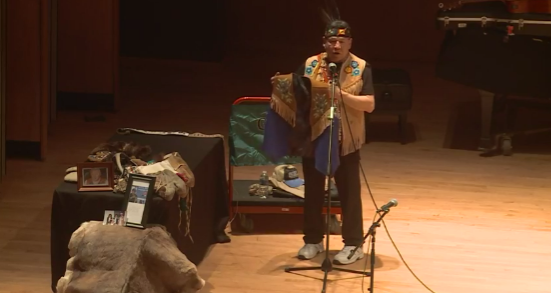 ALBUQUERQUE, David Solomon, Gwich'in of Fort Yukon, urged the people to rise up and defend the caribou and Arctic National Wildlife Refuge, as oil drilling again threatens the Gwich'in homeland.
"We need you," David said, speaking at "The Last Oil," three-day symposium, ongoing now at the University of New Mexico.
As runaway oil and gas drilling threatens Mother Earth, David is among 26 Native people, activists, professors and scientists sharing their words, songs and wisdom at the university, through Friday night.

Mohawk Nation News 'How our Minds were Stolen'

HOW OUR MINDS WERE STOLEN

Mohawk Nation News
MNN. Feb. 21, 2018. When our minds are forced into the evil corporate colonial brainwashing systems by churches, schools, military and government institutions, the goal is to destroy our  connection to all creation. WATCH THE WHITE MAN’S GET RICH SCHEME TO STEAL FROM US:
Read article at Mohawk Nation News
http://mohawknationnews.com/blog/2018/02/21/how-our-minds-were-stolen/
at February 22, 2018 No comments: 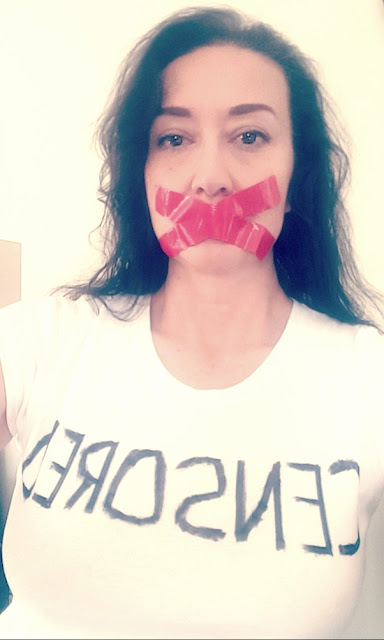 BY: NATALIE HAND
Censored News
As an investigate journalist, I follow controversial stories and often write about them, under the freedom of the press. I also follow a code of ethics in my reporting.
Investigative journalism requires me to intensely probe for the facts and ask pointed questions. Often, my stories expose political corruption so factual accuracy is paramount.
In August 2017, the Lakota Country Times newspaper published a story I reported of a woman being arrested in July, after a routine traffic stop revealed she was in possession of prescription narcotics not prescribed to her, multiple syringes and alcohol in an Oglala Sioux Tribal vehicle assigned to OST Treasurer Mason Big Crow.
The woman, identified as Big Crow's companion, was taken into custody on three outstanding warrants and issued a traffic citation.  She was released on a $5,000 cash bond the following day.
What made the story newsworthy, in my opinion, was that a tribal vehicle was involved in the arrest.
The story went untouched for weeks, as people worked to conceal the arrest or to dismiss the fact that a tribal vehicle was involved. But I received a copy of the official police report from an anonymous source and reported the story based on that information.
To be unbiased in my report, I contacted Big Crow for a comment on the case, which was featured in my story. The prosecutor in the case was terminated and the case against the woman was eventually dismissed. Big Crow received no reprimand for violating the Tribe's code on misuse of tribal property, according to a tribal government source.
Fast forward to the evening of February 15, 2018. I received a message from Connie Smith, the publisher of Lakota Country Times, informing me that she will no longer publish my stories. This message came the same day she had met with Big Crow over the newspaper's sharp drop in ad revenues. Additionally, LCT Editor Brandon Ecoffey is no longer with the publication as of last week.
The Lakota Country Times has held the title as the Tribe's "official legal newspaper" and a tribal resolution states that all advertising must go through that news outlet.
Smith informed me that the Tribe had stopped purchasing ad space and was no longer submitting meeting minutes in her publication.  I attributed this to the Tribe's launch of its own news publication last December, funded by General Fund monies under the Office of the Treasurer and managed by former LCT editor Karin Eagle, who is employed as the Treasurer's public relations person. But Smith insisted it was also due to my article on Big Crow.
Abuse of power in any situation is intolerable and can take many forms. Controlling the proverbial purse strings to suppress the truth is one example. Stripping a small, native-owned business of its ability to succeed is the punishment.
Suppressing information because it may be inconvenient or politically incorrect by government figure heads is media censorship.
The people's right to know what their government is doing is their undeniable right. Historically, native peoples worked collectively and selflessly.  Today, greed and power have consumed some.
My belief is that an in-depth investigation of an issue will expose facts to spur change. You cannot change what you refuse to confront.

Natalie Hand, of Shawnee/Creek heritage, is an activist and journalist that has resided on the Pine Ridge Indian Reservation for 23 years. She believes that there are many frontlines in the battle for justice.
Contact at nataliehand67@gmail.com