Gathering on the Homeland Feb 24 and 25 Manderson, Oglala Territory 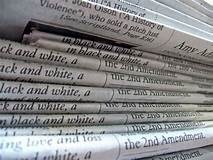 I have chosen to step down as editor of Lakota Country Times to focus on expanding my company Bad Face Consulting. This company was created to help tribal governments develop and implement professional public relations departments and policies in the hopes of fostering better transparency,” said Brandon Ecoffey, former editor of LCT. Journalists will continue to be hampered in their efforts to expose corruption until tribal councils realize their value and pass laws to protect them. The people deserve to know what is happening within their institutions. Without a free press there will always be a veil of secrecy surrounding the work of tribal-governments.

Brandon is an award-winning journalist and former editor of Lakota Country Times and the former managing editor of Native Sun News. He is a citizen of the Oglala Lakota Nation who was born and raised on the Pine Ridge Indian Reservation who earned his education from Dartmouth College.  He founded Bad Face Consulting in 2016
at February 23, 2018 No comments:

In 1998, a historic 113-day occupation of the proposed dumpsite by the Five River Tribes (Fort Mojave, Chemehuevi, Quechan, Cocopah, and Colorado River Indian Tribes) along with environmental activist were assembled at the site to fight and stop the proposed Ward Valley nuclear waste dump. The 113-day occupation prevented federal police from entering the site as well as prevented the test drilling for the dump that would have desecrated the sacred land of Ward Valley. The occupation ended in victory when the U.S. Department of the Interior rescinded the eviction notice and cancelled test drilling. On November 2, 1999, the Interior Department terminated all actions regarding the Ward Valley dump proposal, which officially ended the extensive conflict.
The proposed dump, which would have been in the center of eight wilderness areas, amidst of critical habitat for the threatened desert tortoise, enclosed by the pristine golden canyons and cave paintings of the Old Woman Mountains, and east of the foothills of the Stepladder Mountains that remain covered in a forest of cholla cacti was utterly eliminated by the coordinated effort of dedicated Native and non-native people joined together for the love of Mother Earth.

More:
Proposed hazardous waste dump on sacred land at Ward Valley, California, was halted by the occupation and lawsuits.
http://www.umich.edu/~snre492/ward.html
at February 23, 2018 No comments: 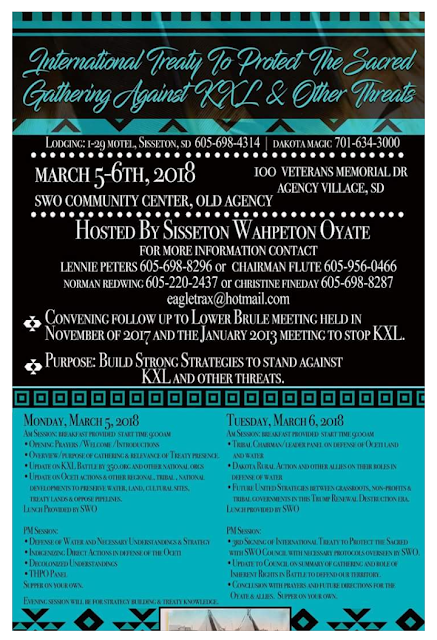 Location change to Sisseton Wahpeton College
at February 23, 2018 No comments: