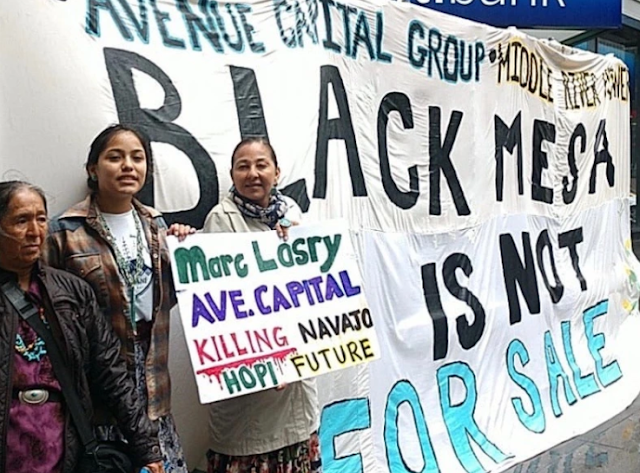 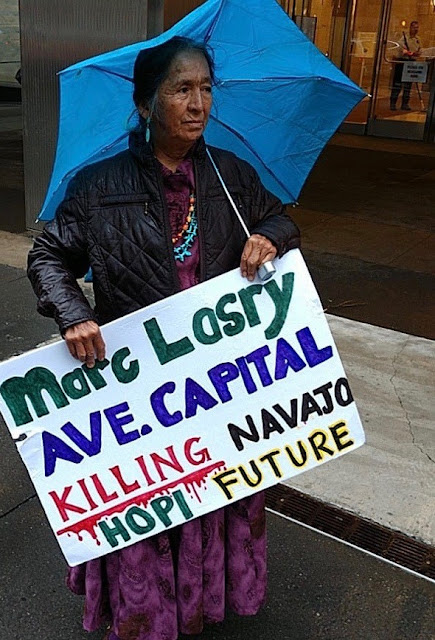 A group of Navajo and Hopi youth and elders has traveled to New York City to deliver a message from their communities to private equity giant Avenue Capital and its CEO Marc Lasry: stop standing in the way of environmental justice and a clean energy future on our homelands. 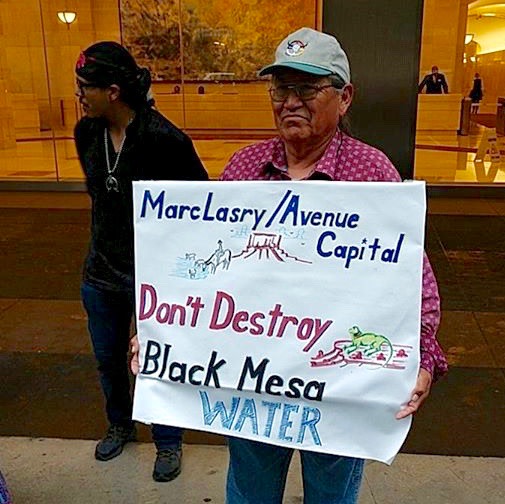 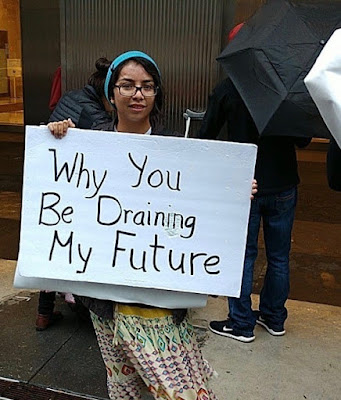 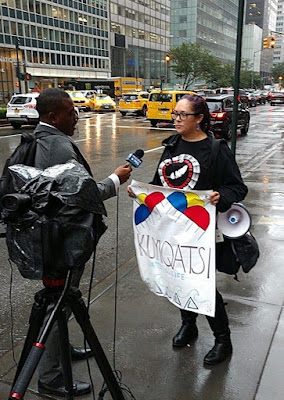 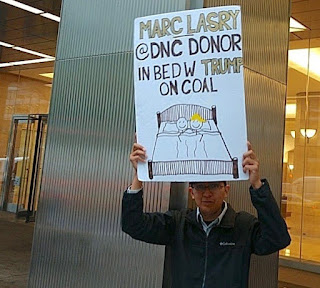 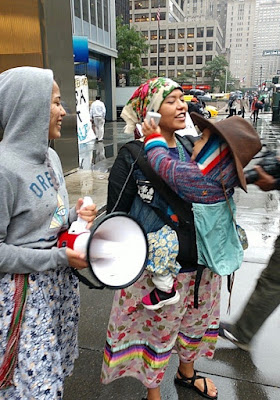 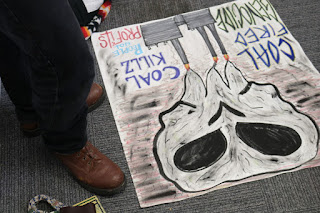 September 10, 2018PAGE, Ariz. – Members of the Navajo Nation are in New York City Monday to call attention to the fate of the biggest coal power plant in the West. The Navajo Generating Station in Northern Arizona is set to close next year. But New York investment firm Avenue Capital Group is considering buying it. The coal plant provides hundreds of jobs to Navajo people and is a major source of revenue for the tribe. This is critical on the Navajo reservation where unemployment is around 45 percent. So, many Navajo support the sale and continued operation of the plant. But Nicole Horseherder, executive director of the Navajo environmental group To Nizhoni Ani, says the coal plant has led to air and water pollution, and health consequences for her neighbors."I think it's important for people out there to know that the type of jobs and the type of revenue we need is one that doesn't kill people and doesn't kill the environment,” she states. “So to those people that are concerned about the jobs and revenues, we are also concerned."The Clean Air Task Force reports that air pollution from the Navajo Generating Station contributes to asthma and heart attacks in the region. Data from the Environmental Protection Agency shows the plant is one of the biggest sources of carbon emissions in the country. Horseherder and several others from the Navajo Nation hope to meet with the CEO of Avenue Capital Group in New York. Horseherder says she wants the potential buyer to hear from the people whose health is impacted by coal power.Horseherder is concerned that the Navajo Nation economy relies too heavily on the generating station. She says with or without a buyer for the plant, coal power will eventually decline. "As everyone knows, coal is not unlimited,” she points out. “At some point the coal is not going to be in the ground anymore, it's going to be gone. What do people do at that point? Do we continue to let the fate of our lives and our future be in the hands of industry and utility?"The Navajo Generating Station provides power to customers in Arizona, Nevada and California, and powers the pumps that bring water to central and southern Arizona. But the Arizona utilities that operate the plant have found cheaper alternatives in natural gas in recent years. The generating station and nearby Kayenta Mine are scheduled to close in 2019 if they are not sold.-- Katherine Davis-Young, Public News Service - Arizona
. 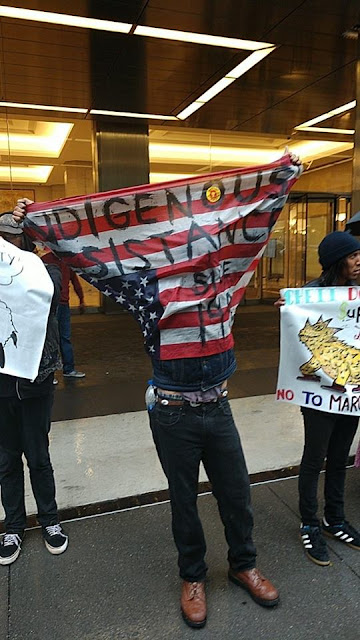 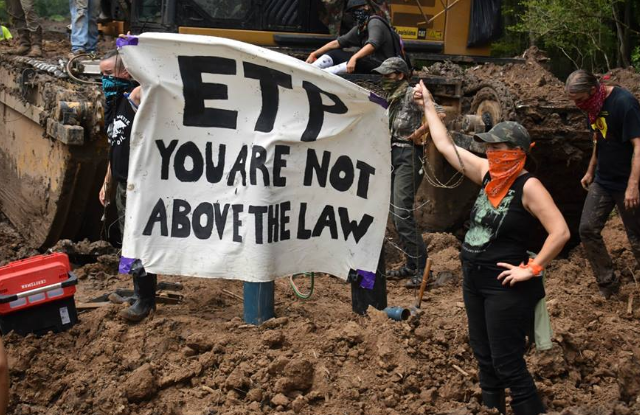 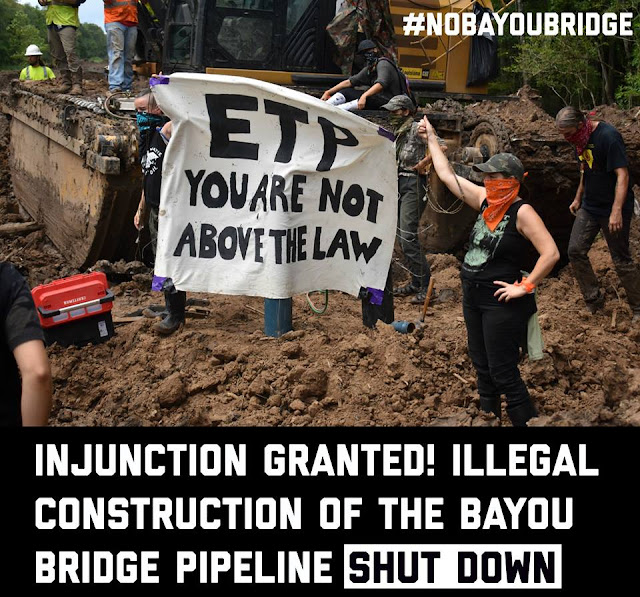 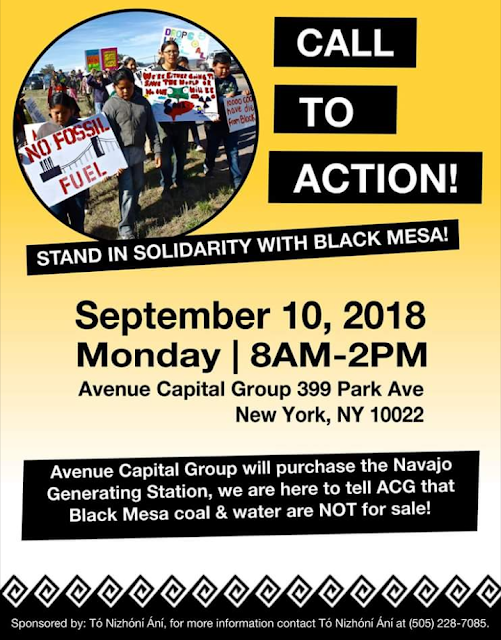 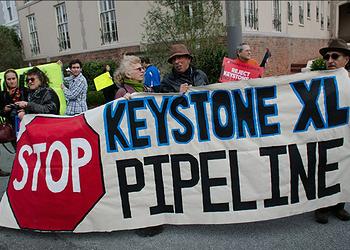 ROSEBUD SIOUX TRIBE AND FORT BELKNAP INDIAN COMMUNITY FILE SUIT AGAINST KEYSTONE XL
By Native American Rights Fund
Censored News
September 10, 2018Categories: Environmental Protection, Hunting and Fishing Rights, Native Lands, Religious Freedom/Sacred Sites/RepatriationThe Rosebud Sioux Tribe (Sicangu Lakota Oyate) and the Fort Belknap Indian Community (Assiniboine (Nakoda) and Gros Ventre (Aaniiih) Tribes) in coordination with their counsel, the Native American Rights Fund, on September 10, 2018, sued the Trump Administration in the U.S. District Court for the District of Montana, Great Falls Division, for numerous violations of the law in the Keystone XL pipeline permitting process. The Tribes are asking the court to declare the review process in violation of the Administrative Procedure Act (APA), the National Environmental Policy Act (NEPA), and the National Historic Preservation Act (NHPA) and to rescind the illegal issuance of the Keystone XL pipeline presidential permit.On March 23, 2017, the U.S. Department of State granted TransCanada’s permit application and issued it a presidential permit to construct and operate the Keystone XL Pipeline. This decision reversed two previous administrative decisions and was done without any public comment or environmental analysis. The permitting process was completed only 56 days after TransCanada submitted its application for the third time. The State Department provided no explanation in the 2017 decision for its contradictory factual finding; instead, it simply disregarded its previous factual findings and replaced them with a new one. The reversal came as no surprise. According to a 2015 personal public financial disclosure report filed with the Federal Election Commission, then-candidate Trump held between $250,000 and $500,000 worth of stock in TransCanada Pipelines, Ltd. NARF Staff Attorney Natalie Landreth explains, “President Trump permitted the Keystone XL pipeline because he wanted to. It was a political step, having nothing to do with what the law actually requires. NARF is honored to represent the Rosebud Sioux and Fort Belknap Tribes to fully enforce the laws and fight this illegal pipeline.”Snaking its way from Alberta to Nebraska, the pipeline would cross the United States-Canada border in Philips County, Montana, directly adjacent to Blaine County and the Fort Belknap Indian Reservation. The pipeline would cross less than 100 miles from the headquarters of the Fort Belknap Indian Reservation and run directly through sacred and historic sites as well as the ancestral lands of the Gros Ventre and Assiniboine Tribes. In South Dakota, the pipeline would cross through Tripp County, just miles from the boundaries of the Rosebud Indian Reservation and within yards of Rosebud’s trust lands and tribal members’ allotments. These lands are well within the area of impact for even a small rupture and spill. There are countless historical, cultural, and religious sites in the planned path of the pipeline that are at risk of destruction, both by the pipeline’s construction and by the threat of inevitable ruptures and spills if the pipeline becomes operational. Additionally, the Rosebud Sioux Tribe operates its own water delivery system, which is part of the Mni Wiconi Rural Water Supply Project. The pipeline would cross the two sources of water for the Mni Wiconi Project.Despite all of these facts, throughout the permitting process, there was no analysis of trust obligations, no analysis of treaty rights, no analysis of the potential impact on hunting and fishing rights, no analysis of potential impacts on the Rosebud Sioux Tribe’s unique water system, no analysis of the potential impact of spills on tribal citizens, and no analysis of the potential impact on cultural sites in the path of the pipeline, which is in violation of the NEPA and the NHPA.William Kindle, who was president of the Rosebud Sioux Tribe in August 2018 when the Tribal Council authorized NARF to finalize and file this lawsuit, stated at that time that, “As President of the Rosebud Sioux Tribe, I want to make it perfectly clear, and give fair warning to President Trump, Secretary Zinke, The United States Army Corps of Engineers, TransCanada and their financial backers and potential investors, South Dakota Governor Daugaard, Representative Noem, and Senators Thune and Rounds that the Rosebud Sioux Tribe opposes the construction of the Keystone XL pipeline. Through our attorneys—the Native American Rights Fund—the Rosebud Sioux Tribe will use all means available to fight in the courtroom this blatant trespass into Sicangu Lakota territory.”Read more about the Keystone XL Pipeline case.
at September 10, 2018 No comments: