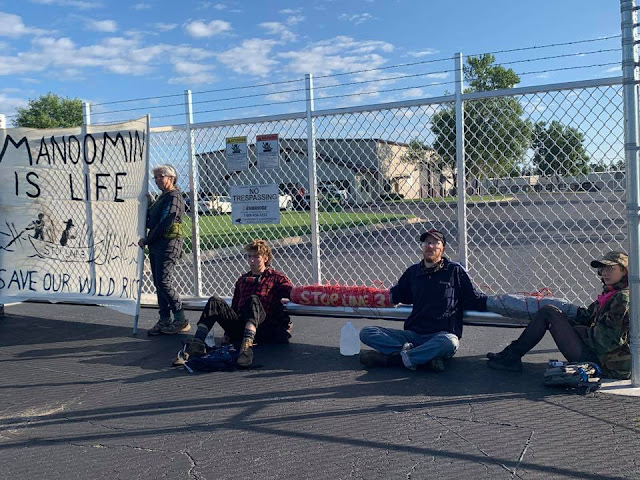 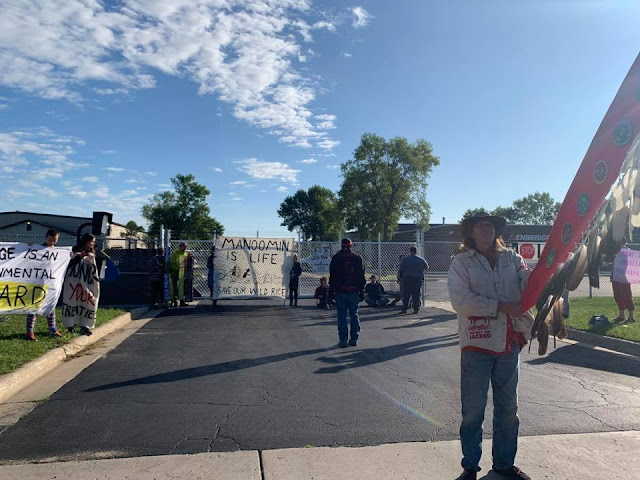 BEMIDJI, Minn. — In the early morning, 6 water protectors locked to the gates of a key Enbridge office in Bemidji, Minnesota, in protest of proposed tar sands pipeline project Line 3. 2 chained their necks to the gate, risking personal safety for the hundreds of watersheds Enbridge proposes to send nearly 1 million  barrels of tar sands from Alberta through on its way to the shores of Lake Superior.

Enbridge responded by closing its office for the day.

Wild rice season is nearing, in which Anishinaabe people will take to their canoes to harvest the sacred food that is at the heart of Anishinaabe culture. Enbridge plans to send tar sands through dozens of wild rice watersheds, irrevocably impacting its growth and survival.

Line 3 is one proposed infrastructure project out of the Alberta tar sands, alongside TransCanada’s Keystone XL and Kinder Morgan’s TransMountain pipelines. Tar sands is the dirtiest fossil fuel in the world. Weeks ago, the Teck Frontier Mine, a proposed tar sands expansion twice the size of Vancouver was recommended by a board of Canadian environmental regulators.

“As an able-bodied and willing person, it is my duty to stand with Anishinaabe people who are putting their lives on the line every day standing up for all of us, for all of our water.” Kieran Cuddy said, while locked to the front gate of Enbridge’s office.

Thank you water protectors!!!!!!! Not only is it frightening the company would endanger the wild rice watersheds, but to think that they are sending this oil to the shores of Lake Superior indicates the complete amoral insanity that drives such economic thinking - which is totally disconnected from our earth and all life on it.