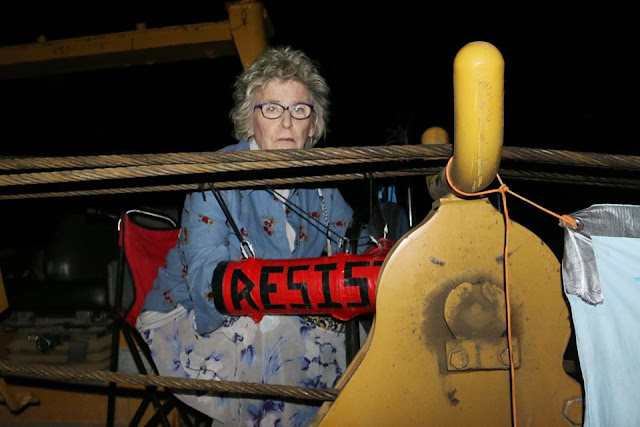 “The problem with pipelines is they always leak,” stated Duff. “What they leak are toxins into the land, water, and air.”

This site is just minutes down the road from the ongoing Yellow Finch tree sit blockade, where 2 tree sits have been standing strong in the path of the pipeline for 388 days and counting.

Folks at the tree sits stated the following in support of today’s action: “Thank you, Duff, for stopping the pipeline on its path to the tree sits. Thank you for stepping up the climate strike — from refusing to participate, to actively preventing the destruction of the earth. We are so pleased to see that we are part of an intergenerational struggle, and that our elders are not leaving all of the challenges facing the planet to the youth. Let’s all rise up together to stop the MVP!”

Crystal Mello, a fellow grandmother from Montgomery County, VA (who took up residence in the nearby tree sits a few months ago), stated: “Any action to prevent any more destructive actions taken by this company is one-hundred percent ok with me. This pipeline will be a ticking time bomb, especially in this spot that MVP had to abandon on December 4, 2018, and still has yet to attempt digging. They’re steadily ripping up the earth and planting pipe elsewhere.”

This site has long been a point of contention for anti-pipeline activists. Crystal refers to December 4 of last year, when MVP halted construction at Cove for the winter because they exposed several underground springs. Pipeline workers attempted to dig a trench to lay pipe, only to have the area repeatedly fill with water, turning the site into muddy pond. Pipeline opponents held a press conference at the site after MVP “surrendered to the groundwater” asserting that nature itself was fighting back against the pipeline. MVP claimed they would return in the spring when the area was “less wet” but they have yet to dig up that particular site.

In addition, this summer, pipeline fighters staged a protest nearby where over 30 people walked onto the pipeline easement. Today, Duff’s action escalates the ongoing resistance in this area.

THANK YOU DUFF, and all the other water protectors and mountain defenders who joined us today and every day!

Donate to help get Duff out of jail and support ongoing resistance! bit.ly/supportmvpresistance