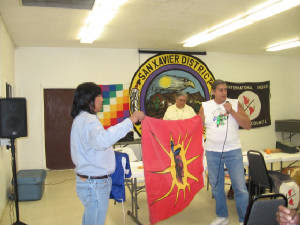 In celebration of beginning our 14th year at Censored News, we share with you our first article. Censored News was created the day I was terminated at Indian Country Today. On this day I was on my way to the Indigenous Peoples Border Summit to cover it, at San Xavier, on the Tohono O'odham Nation. With no place to publish the article, I created Censored News. Today, Censored News is a collective, with no ads, grants or revenues.

Mohawks in solidarity with Tohono O’odham at border summit


SAN XAVIER DISTRICT, TOHONO O’ODHAM NATION -- Indigenous  Peoples at the Border Summit of the Americas opposed a border fence that will separate Indian communities in their ancestral territories and contribute to the Bush administration’s plan for corporate profiteering.

Without compromise, Indigenous called for a halt to the militarization, oppression and psychological terrorism created by the military-industrial complex along the US/Mexico border.

Mohawks from the northern border united with Tohono O’odham from the southern border and demanded a halt to the militarization of their lands by the US Border Patrol, National Guard, and federal agents.

Mohawk Mark Maracle, representing the Women Title Holders, said Mohawks from the north are ready to support the Tohono O’odham in the south “by any means necessary.”

“We are directed under our law to go to the aid of others and not just sit back and watch the devastation,” Maracle said, adding that the proposed border fence would upset the natural order.

“If this fence goes up, this nation will see natural disasters like it has not seen before. It will disrupt nature and the natural order.”

The Border Summit of the Americas opposed the border fence and the US Senate’s passage of the multi-billion dollar Secure Fence Act of 2006, during the Border Summit Sept. 29 – Oct. 1.

Calling it another “Berlin Wall,” Lakota Bill Means said Indian people would not allow the United States to violate federal laws protecting American Indians, sacred sites and the environment. Those include the Native American Grave Protection and Repatriation Act and the American Indian Religious Freedom Act.

If the US attempts to continue with its policy of ignoring federal law to build the fence, Means said the government of Mexico will be called on to demand that the US follow its own laws and issue an environmental impact statement before building the fence.

Means said Indian people would not sit by and allow the US to carry out the mandate of the US to disregard laws to violate Indian lands.

(Homeland Security waived environmental and other laws in 2005 to complete the border fence in Southern California. Kumeyaay said it would allow the US to “plow through” the burial places of their ancestors.)

The summit was organized by Tohono O’odham Mike Flores and facilitated by the International Indian Treaty Council members, including Bill Means, Tony Gonzales, and Jimbo Simmons. Security and support were provided by the American Indian Movement.

During the summit, Angelita Ramon, mother of Bennett Patricio, Jr., 18-year-old Tohono O’odham, described how her son was run over and killed by the Border Patrol. Ramon described the harassment that followed when they began to investigate the details of his death and whether it was an accident. The family has filed suit against the Border Patrol and the United States. Ramon said the case was transferred to the Ninth Circuit Court of Appeals in San Francisco, since justice was impossible in the high court in Tucson, Arizona.

“No one should be allowed to die for want of a drink of water,” Wilson said, pointing out that his individual effort comes after humanitarian groups were halted by the tribe from coming on tribal land to render aid.

Indigenous at the summit called for a halt to corporate welfare, including contracts to Boeing to build the border fence and contracts to Halliburton’s Kellogg, Brown, and Root to build migrant prisons.

Urging a halt to trade policies, which are leading to mass starvation and unemployment in the Americas, the summit called for reforms of the North American Free Trade Agreement and other trade agreements.

During the summit, Tohono O’odham described how Border Patrol intrude into the homes of elderly O’odham without permission, hold people at gunpoint and ask for papers and occupy and throw garbage in sacred sites, including Baboquivari Peaks, the sacred place of the Creator I’itoi.

Westerman showed a film work in progress of the genocide of American Indians. The first in the series is focused on the genocide by missions and gold miners in the state of California. It also describes the militia who collected bounties paid by the state and federal governments for Indian scalps and Indian heads. It further documents how smallpox blankets were given to Indians in California during the ongoing era of genocide.

The summit called for a halt to subsidized and genetically modified seeds, including corn and grain that have decimated Indigenous economies.

Pointing out that the fragile desert ecosystem and all of its creatures will be impacted, Maracle said, “The environmentalists should be up in arms.”

Maracle said he was directed by the Women Title Holders to attend the summit as a representative because Native people face the same intrusions and violations of human rights at the northern border.

The Women Title Holders said in a statement, “The colonial government has imposed tribal and band council systems which are not supported by our people. Under international law, we have a right to our nationality and cannot be arbitrarily denied that right.”

The testimony was live on the radio in the Tucson area, and live on the Internet, with listeners responding around the world. After processing, the audio files will be available in the archives of Earth Cycles.