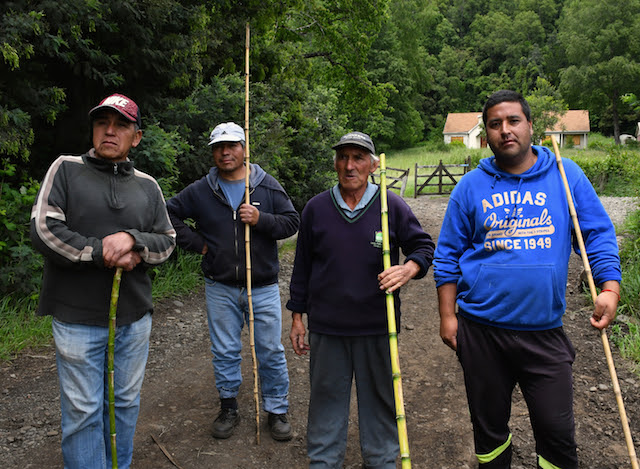 Mapuche men block entrance to Liempi Colipi, a Mapuche community occupying 1500 ha of ancestral lands begun two weeks ago. They were attacked by the police twice, with some members injured and others hospitalized. Photo: Orin Langelle/GJEP

Censored News
2 December 2019                                     Español abajo
Contact: Steve Taylor in the U.S. +1.314.210.1322 / In Chile: Anne Petermann (English) +1.716.364.1188 / Gary Graham Hughes (Spanish and English) +1.707.223 5434
As UN Climate COP launches in Madrid Activists in Chile Demand Rejection of Neoliberal Model and Removal of Chile from COP Presidency
Chilean President Sebastian Piñera Abandons Plans to Travel to Madrid for COP25
Due to Threat of Detention for Human Rights Abuses
SANTIAGO, Chile–While the annual UN Climate Summit (COP25) commences in Madrid, protesters across Chile, the country in which the COP was originally planned, are demanding that Chile be stripped of the Presidency of COP 25 due to the human rights abuses happening in Chile. At the same time, Spanish Judge Baltasar Garzón has threatened to have Chile’s President Piñera detained if he attempts to enter the country.