On Friday, December 20, 2019, NARF and their clients, the Rosebud Sioux Tribe and the Fort Belknap Indian Community (the Tribes) received some great news from a Montana court. The federal court denied the United States federal government’s and the TransCanada’s (TC Energy) efforts to dismiss the Tribes’ case against the KXL Pipeline (Rosebud Sioux Tribe v. Trump). 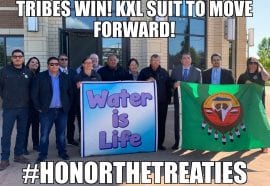 NARF Staff Attorney Natalie Landreth praised the decision, “The court’s decision means that ALL of the tribes’ claims on the current permits will proceed. The only claims dismissed are the ones that the Tribes conceded should be dismissed because they were based on an old permit. So this is a complete win for the tribes on the motions to dismiss. We look forward to holding the Trump Administration and TransCanada accountable to the Tribes and the applicable laws that must be followed.”


NARF Staff Attorney Matthew Campbell also reacted to the news, “Of course, the treaties were agreed to by the president of the United States and ratified by the Senate, so the treaties clearly apply. The court rightly found that today.”