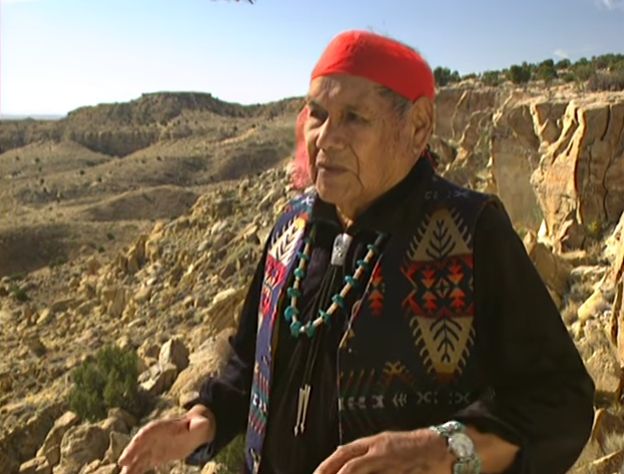 Hopi Messenger Thomas Banyacya, Sr., speaks of his seven years in prison for declining to sign up for the U.S. military draft and be an instrument of war. Choosing the path of peace, Banyacya speaks of the choice of mankind now, as to whether to destroy Nature or care for the Earth. He describes the United States killing of people in other countries, and describes the U.S. nuclear bomb "burning everything to ashes."
"This comes from my heart and I'm going to stand on it. This is not our war," Banyacya says of choosing peace over fighting World War II.
"I spent almost seven years in prison trying to be a good Hopi."
Describing the uranium used to produce the first atomic bombs, Banyacya said someone came without the Hopi elders' permission and took the uranium from the land, and took it to New Mexico, then threw that bomb on the people Hiroshima.
Banyacya points out that all this war and killing with bombs will come with a cost, just as the destruction of Nature will come with the cost of ultimate destruction unless we begin to care for Nature.
Banyacya, born in 1909, passed to the Spirit World in 1999.
Listen to Banyacya's words.
Watch below the most viewed video production of the Sacred Land Film Project.