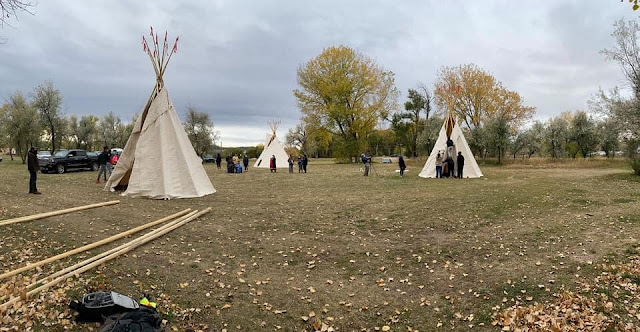 By Candi Brings Plenty
Censored News
French translation by Christine Prat
Friday, Oct. 16, 2020
Our Akićita were in prayer, you could hear the beautiful ceremony songs being sung as the Rapid City Police Department interrupted them and forcibly removed them. They also dragged out a Lakota Unči (grandmother) while she was too was in prayer.
RAPID CITY, South Dakota -- Every Friday for the past two years our community Oyaté has provided a meal for our houseless relatives hosted by the grassroots organization OyateKin ChanteWastepi. The Mni Luzahan Patrol, have been foot patrolling the Rapid Creek since this summer, because in August there were eight Indigenous homicides in our city and two were houseless relatives sleeping by the creek. And just this week we had two houseless Indigenous relatives die sleeping outside. 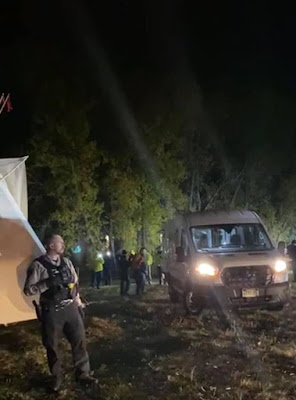 The cops harass and confiscated those relatives’ sleeping bags and blankets so they can’t sleep peacefully or have to go to detox and face being arrested because it’s illegal in this city to sleep in a park, on Indigenous lands, in our sacred Black Hills that have been stolen from us.
By setting up tipis in public unused space, the Rapid City Police Department declared this an unlawful assembly. They took down all four tipis and arrested those remaining in the last tipi.
. 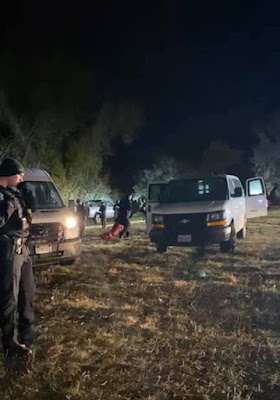 Our relatives put up tipis here in Racist City for a winter camp for our humble Oyaté in need. The only options for our relatives are -- The Corner Stone mission, which is an oppressive colonial, Christianity construct where houseless folks have to pay on a daily basis, or go to detox where they face institutionalized racism and temporary lockdown until the police system states they are sober and ready to be released. In the meantime, they are subjected to wear hospital gowns and no shoes.
Our relatives deserve better than just those two options, so that’s what our community Akićita provided because our Mayor refuses to use any tax dollars on our houseless Indigenous relatives and told them to go back to where they came from. When in our Lakota creation story, we crawled out of Wind Cave here in our sacred Black Hills. Our houseless relatives are EXACTLY where they came from!
Our Oyaté’s treaty, constitutional and human rights are being violated and the Rapid City Police Department surrounded the camp two hours after the tipis were erected with twenty cop cars and had a SWAT team hiding a block away.
Our tipis are sacred geometric structures gifted to our ancestors by the spirits and passed down to us. There is no difference from when we were at Standing Rock and we put up our tipis and the DAPL officers would come OVER the barrier they set up to take them down and arrest anyone they could grab.
In these photos, five of our Akićita were in prayer, you could hear the beautiful ceremony songs being sung as the RCPD interrupted them and forcibly removed them. They also dragged out a Lakota Unči (grandmother) while she was too was in prayer.
This was NOT a protest, this is Lakota Oyaté setting up winter camp in our sacred He Sapa like we have done for generations under the Wičahpi Oyaté (Star Nation), with ceremony led by medicine man Chief Crow Dog. He too had to be evacuated. This was a temporary, TRADITIONAL solution, until a tiny house encampment could be constructed.
The RCPD and media are labeling this as a “protest” and even verbally stated they were going to arrest Nick Tilsen and revoke his bond from the Mount Rushmore protest. When he was there as an IkčéWičaša (common man) supporting his brother, their white supremacy was showing as their intent was to single out Nick and incriminate him for being a good relative.
I have unshakable faith in our Lakota spirituality and I am an Indigenous Justice organizer who emphasizes community organizing. And from my vast experience, I know that there has to be visibility to the injustice at hand to elevate awareness to the situation so that we can build in numbers and dismantle colonial systems of oppression. But mainstream media will not elevate this narrative from an Indigenous perspective, so we have to.
This winter encampment was built on ceremony and the hearts of our Lakota community leaders.
Please DONATE, share and support the Mni Luzahan Legal Fund:
https://www.campmniluzahan.org/

God bless you all... Trump has unleashed the worst of the worst in these evil people. We pray it ends.. Now!