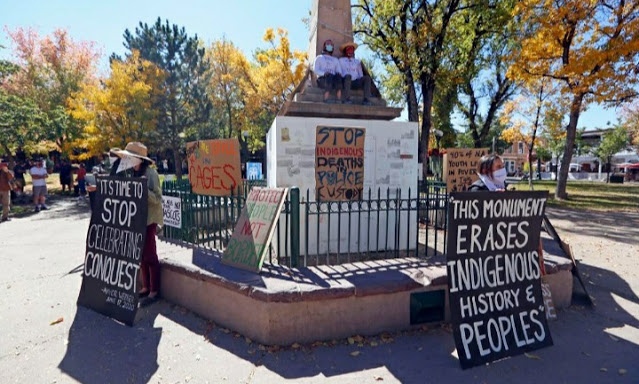 By Brenda Norrell
Censored News
The racist obelisk in Santa Fe Plaza was torn down on Monday, on the third and final day of the occupation and lockdown led by Tewa women. Pueblos demanded that the Mayor of Santa Fe keep his promise to remove the obelisk, a clear symbol of oppression and a glorification of the brutal murderous conquistadors who seized the land of Pueblos for the City of Santa Fe and the State of New Mexico.

The City of Santa Fe didn't want anyone interfering with their fake jewelry sales, or tourists discovering the racist history of Santa Fe, or the money spenders learning about the brutal torture of Pueblos for its monuments and city. Police shut down the occupation in Santa Fe Plaza Sunday night. One person who locked down said police dragged him away, hurting his knees. Police then set up barricades around the racist obelisk in the Plaza to keep the truth-tellers away on Sunday night.

Two more arrests followed on Monday, the third and final day, as police were chased from the Plaza. However, ropes and chains were thrown over the obelisk and it was pulled down with human hands. Watch on YouTube: https://youtu.be/peIFaewZYG0

When the occupation and lockdowns began on Saturday, the Santa Fe New Mexican reported, "A still-hollow promise to remove a controversial monument from the Santa Fe Plaza echoed loud and clear Saturday afternoon."

"Mayor Alan Webber said in June he intended to call for the removal of the obelisk in the center of the Plaza, which is dedicated to “heroes” who died in battle with “savage Indians,” because the action is “the right thing to do” and 'long overdue.' Now activists are fed up that the monument has made it to Indigenous Peoples Day weekend. Read article

In our article at Censored News when the Onate statue was taken down, Maurus Chino, Acoma Pueblo, tells the true history of the brutal torture and murder of Pueblos for the seizure of land for Santa Fe and the State of New Mexico.

Maurus writes, "We equate the conquistador Juan de Onate and his soldiers with Hitler and the Nazis. Both practiced genocide. The Spanish land grant system is nothing but double-speak for the theft of native lands. These lands that were so freely 'granted' are Indian lands."

Stating the true history, Chino said, "In January 1599, a larger force was sent to Acoma, where an epic battle ensued lasting three days and by historical accounts of the Spanish themselves, the ended with over 800 hundred men, women, and children being butchered. Men over the age of 25 were sentenced to have one-foot cut and 25 years of slavery. Males between the ages of 12 and 25 were likewise given 25 years of slavery. Young girls between the ages of 12 and 25 were given 25 years of slavery. 60 young girls were sent to priests in Mexico, never to return to Acoma." Read more: https://bsnorrell.blogspot.com/2011/03/acoma-pueblo-maurus-chino-anti-war.html 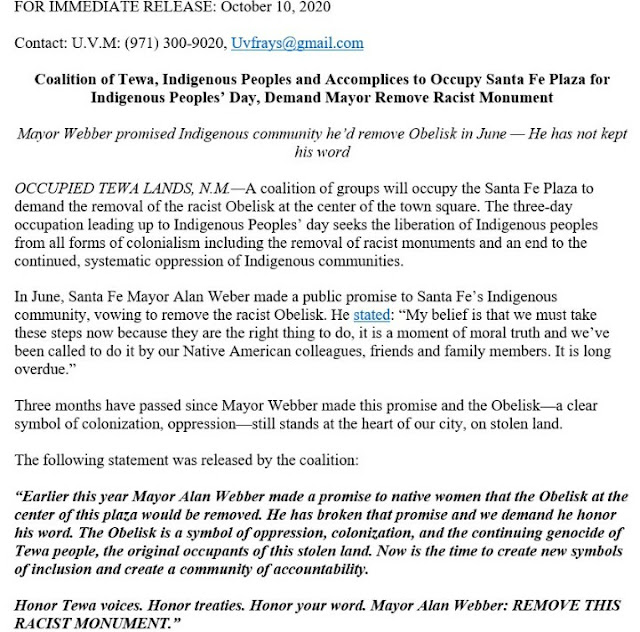 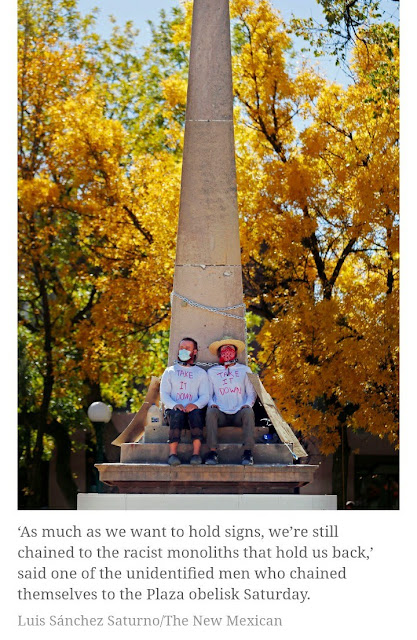