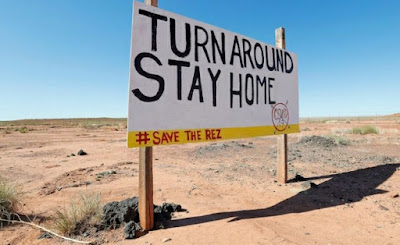 After being blocked, Ami posted her questions online:
"1) how was community consent obtained?
2) what are the possible, dangerous consequences of this research -- both biologically and culturally?
3) how do you consider paying participants from a socioeconomically disadvantaged population as 'volunteering'?"

"Once again it is not that I don’t agree with clinical testing, but I don’t agree with the coercive measure being utilized by our Navajo Nation government to solicit participation. I just want our People to be fully informed," Ami said.
Ami holds a doctoral degree in Native American Studies, with an emphasis in Dine' Studies, Animal Studies and Decolonial Studies.
Read article at Censored News: https://bsnorrell.blogspot.com/2020/09/navajo-president-blocks-dineh-college.html
It is unknown whether Johns Hopkins is collecting blood, tissue and DNA samples of Navajos and how it is being used.
The Havasupai Nation had to go to court halt ASU researchers from misusing their blood samples for genetics research, taken during  a diabetes study.
Havasupai court case: ASU violated ethics
Now, 571 Navajos have died from coronavirus. More than 3,400 have the virus and have not recovered.
Censored News will publish a follow-up to this article.
References
Johns Hopkins University history of medical experiments on Navajos
Johns Hopkins University arrived on the Navajo and White Mountain Apache Nations in 1980. Johns Hopkins history of vaccine and medical experiments is stated on its website:
In 1980, a young Indian-born pediatrician named Mathuram Santosham arrived on the White Mountain Apache Reservation to address an outbreak of diarrheal disease in babies. Dr. Santosham and his team trained Apache community health workers to administer oral rehydration solution (ORS) to children with serious diarrhea. The rate of diarrheal deaths dropped to zero. They established that infants could eat—and bounce-back faster—after taking ORS. Apaches, through these landmark studies, made medical history.

In partnership with the Apache tribe and Navajo Nation, we introduced other promising vaccines. We evaluated their effectiveness, and published results that would change global practice.

Following the introduction of ORS and vaccines that prevented childhood pneumonia and meningitis, the Apache and Navajo tribes asked Santosham to help them to look beyond infectious disease. Newer, pressing problems were concerning the tribes including suicide, unprepared parenting, adolescent health, and a growing burden of chronic disease. And together, we discovered new solutions.
Among the solutions are these now underway:
The seroprevalence surveys use blood tests to identify people in a population who have antibodies to the virus.
Johns Hopkins states it is also involved in COVID-19 surveillance and contract tracing on Native American lands, including the Navajo Nation.
Johns Hopkins researchers received $35 million in funding from the U.S. Department of Defense in July for two nationwide clinical trials to test the effectiveness of a convalescent blood plasma outpatient treatment. The treatment is a transfusion of a blood product from COVID-19 survivors that contains antibodies that may help the patient’s immune system fight the virus, Johns Hopkins said in a news release.
Read more at Johns Hopkins:
https://caih.jhu.edu/programs/category/covid-19-response
News References
Havasupai and informed consent
Censored News asked Johns Hopkins medical researchers if they are collecting blood, tissue and DNA of Navajos and using it in other research. Here's one reason why. The Havasupai Nation had to go to court to halt ASU researchers from misusing their blood samples in genetic research. This article on the Havasupai case and ethics describes informed consent in regards to the Nazis and Nuremberg trials. In our article today, we also question if Johns Hopkins received informed consent from Navajos in their first language, Dine' or English, while carrying out vaccine and medical experiments on Navajos for the past 40 years.
https://journalofethics.ama-assn.org/article/genetic-research-among-havasupai-cautionary-tale/2011-02
Eli Lilly and Johnson and Johnson both halt coronavirus vaccine experiments
https://www.oregonlive.com/business/2020/10/eli-lillys-coronavirus-drug-trial-suspended-day-after-jj-covid-19-vaccine-trial-hits-pause.html
COVID-19 vaccine trials starting this week on Navajo: Sept. 17, 2020
By Rima Krisst | Sep 17, 2020 | CORONAVIRUS UPDATES, News | WINDOW ROCK: Volunteer vaccine trials with Pfizer-BioNTech for COVID-19 will be starting this week on Navajo ... The common sentiment among many people who responded to the post was that they don’t want to be used as “lab rats” or “guinea pigs.” “Hell no!” read several responses.
Laura Hammitt, director of infectious disease programs at the Johns Hopkins Center for American Indian Health, who is overseeing the COVID-19 vaccine trials on Navajo, said the choice to go with the Pfizer trial was vetted by health professionals who serve the Navajo Nation. These include the Navajo Department of Health, the Indian Health Service and tribal health providers.
Read article at Navajo Times: https://navajotimes.com/coronavirus-updates/covid-19-vaccine-trials-starting-this-week-on-navajo/
Indigenous in Guatemala infected by Johns Hopkins in medical experiments:
"A U.S. federal judge in Maryland has ruled that pharmaceutical company Bristol-Myers Squibb, Johns Hopkins University and the Rockefeller Foundation must face a $1 billion lawsuit over their roles in a 1940s medical experiment that saw hundreds of Guatemalans infected with syphilis.

About 775 Guatemalan victims and relatives in 2015 launched a civil suit over the U.S.-led experiment, which aimed to find out if penicillin could be used to prevent sexually transmitted diseases."
https://www.voanews.com/americas/judge-lawsuit-over-guatemala-syphilis-experiment-proceed
CNN: Trump pressuring Pfizer and others to speed up vaccine before the election:
https://www.cnn.com/2020/10/06/politics/trump-pfizer-vaccine/index.html
U.S. Government Engages Pfizer to Produce Millions of Doses of COVID-19 Vaccine: U.S. Government Press Statement
The U.S. Department of Health and Human Services and the Department of Defense (DoD) today announced an agreement with U.S.-based Pfizer Inc. for large-scale production and nationwide delivery of 100 million doses of a COVID-19 vaccine in the United States following the vaccine’s successful manufacture and approval. The agreement also allows the U.S. government to acquire an additional 500 million doses. The federal government will own the 100 million doses of vaccine initially produced as a result of this agreement, and Pfizer will deliver the doses in the United States if the product receives Emergency Use Authorization (EUA) or licensure from the U.S. Food and Drug Administration (FDA), as outlined in FDA guidance, after completing a demonstration of safety and efficacy in a large Phase 3 clinical trial.

Brenda Norrell was a news reporter for Navajo Times in the early 1980s when she observed Johns Hopkins University researchers at Fort Defiance Indian Health hospital on the Navajo Nation. The questions about Johns Hopkins and its secrecy continued through the years. While living on the Navajo Nation for 18 years, Norrell was a stringer for Associated Press and USA Today and worked for local and national publications.

After serving as a longtime staff reporter covering the Southwest for Indian Country Today, she was censored and terminated. As a result, she created Censored News in 2006. She has a master's degree in international health, focused on water, nutrition, and infectious diseases.

Copyright Brenda Norrell, Censored News, may not be used without permission.