Western Shoshone Ian Zabarte 'The Most Bombed Nation on Earth' 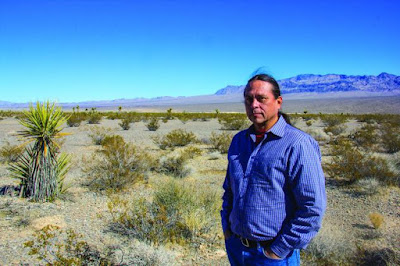 A message from the most bombed nation on earth

More than 900 nuclear tests were conducted on Shoshone territory in the US. Residents still live with the consequences.

You never know what is killing you when it is done in secret.
I watched my uncle suffer from horrible cancer that ate away at his throat and my grandfather die of an auto-immune disease that is known to be caused by exposure to radiation. They say he had a heart attack, but when your skin falls off, that puts stress on your heart.
Many of my cousins have died. Last year, my cousin, who is about 50, had a defibrillator put in his chest. Now his daughter, who is a toddler, has heart problems as well. At around the same time, one of my cousins told me his mom has cancer. And then a week later, he found out he has it, too.

READ & LISTEN TO THIS STORY.
To listen go to MNN site if player here is not functioning
.MNN
Audio Player