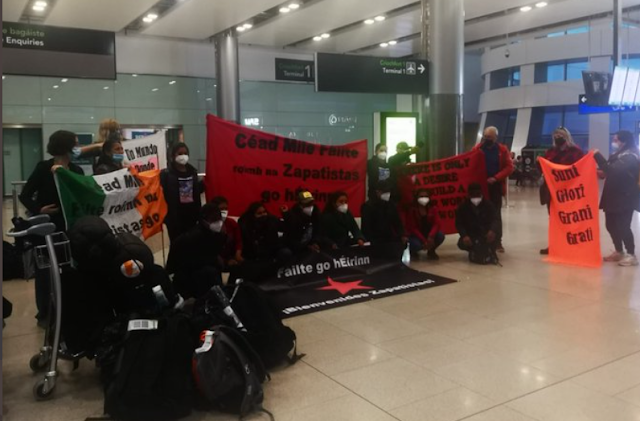 Zapatistas on the Journey for Life received a warm welcome today when they arrived in Ireland. The delegation is from the larger delegation of 177 from Chiapas that arrived in Vienna, Austria. Championing the struggle and resistance, they carry the message of autonomy, self reliance and dignity. Zapatistas from the delegation have also been with Sami in the Far North lands of Finland and Russia.
“Living as human beings means living with freedom. Living is about art, science, joy, dance, & struggle.” -Words of the Zapatistas 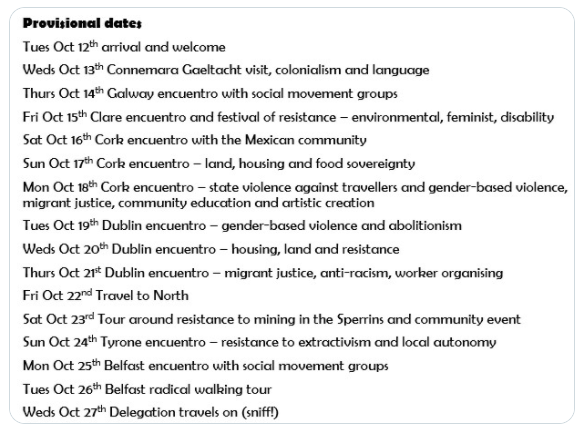 Article by Brenda Norrell
Censored News
Zapatistas are in Ireland! Speaking in Tzeltal, Tzotzil, Chol, Zoque, Mam, Tojolabal through Spanish and from Irish through English ...
The delegations on the Journey for Life are spreading across Europe now.
One delegation of Zapatistas was with Sami in the far north, Finland and Russia, others are planning for journeys to Scotland and London. A total of 177 Zapatistas arrived from Chiapas, after being delayed when the Mexican government delayed issuing passports.
They touched down in Vienna, Austria, and supported Kurdish women in resistance immediately before joining resistance efforts to protect the land and water in neighboring countries.
Before this delegation of 177 flew to Europe, another delegation of Zapatistas from Chiapas crossed the Atlantic by ship, joining resistance struggles in Spain, France and beyond, carrying their message of 'Resistance. Autonomy. Self Reliance. Dignity.'
at October 12, 2021 No comments:

Apache Convoy on the Spiritual Road to the Ninth Circuit Court 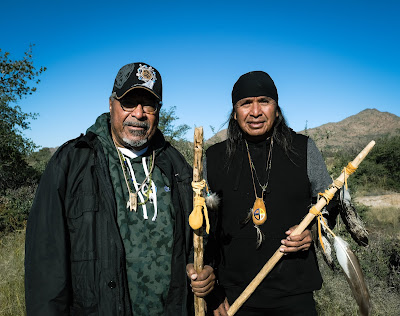 Rev. John Mendez joins the Apache Spiritual Convoy To the 9th Circuit
with Wendsler Nosie, founder Apache Stonghold
Apache Stronghold on Spiritual Journey through Arizona and California to Protect Sacred Oak Flat
By Apache Stronghold
Censored News
Oct. 13, 2021
Rev. John Mendez who retired in 2019 as pastor of Emmanuel Baptist Church in Winston-Salem has his whole life been engaged in the struggle for social justice. He has come to San Carlos Apache Reservation to join his long time friend of 30 years, Wendsler Nosie Sr., spiritual leader of the Apache Stronghold, on an important spiritual convoy that begins this week to the 9th Circuit Court in San Francisco for a hearing on the 22nd where the Apache religion will be on trial, a religion that seeks to protect not only sacred Oak Flat from destruction, but to protect all of Mother Earth and all the future generations to come. John said, “I had to come.” And he has been coming to support the Apache Stronghold now for 30 years joining efforts to not only protect Mount Graham and Oak Flat, but to recognize the Apache and all native religions as authentic and legitimate religion that must be recognized and protected. 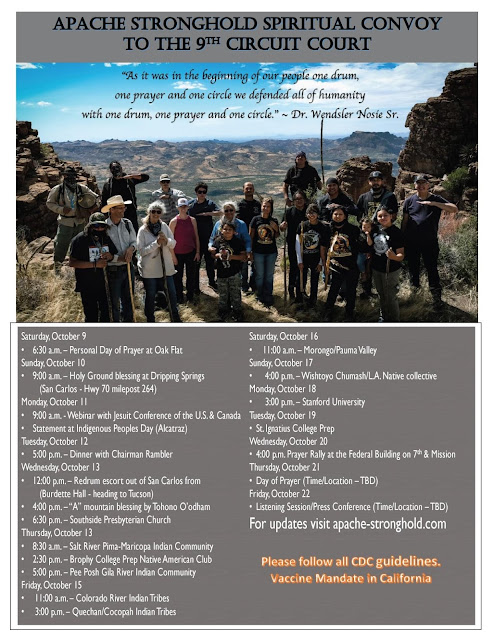 "We're coming every day of this week to tell Biden: Stop this madness."

At least 155 more protesters were arrested outside the White House Tuesday as part of a weeklong action pressuring President Joe Biden to declare a climate emergency and end all new fossil fuel projects.

Russell Chisholm, coordinator of Mountain Valley Watch and co-chair of Protect Our Water Heritage Rights, was among those who spoke at the rally Tuesday. Pointing to the years of opposition that the MVP has faced, he vowed that "we will continue to resist that project until it is defeated."Guided by the theme "fossil fuels are driving the climate crisis," the latest demonstration followed over 100 arrests on Monday, when protesters marked Indigenous Peoples' Day and drew attention to polluting operations including Enbridge's Line 3 tar sands project and the proposed Mountain Valley Pipeline (MVP).