Do not be fooled by Lithium Nevada's publicity tactics 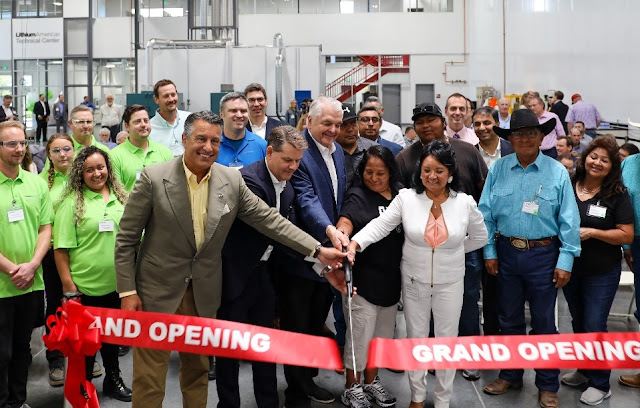 Do not be fooled by Lithium Nevada’s publicity tactics

Thacker Pass lithium mining project will be the biggest desecration and rape of a known Native American massacre site in our area. I believe the lack of opposition from the elected officials of the Fort McDermitt Paiute-Shoshone Tribe is a serious injustice to our people.

I cannot sit by while Lithium Nevada, a Canadian-owned company, and politicians like Gov. Steve Sisolak engage in a concerted effort to convince the public the current Fort McDermitt Tribe’s complacent support to the Thacker Pass open-pit lithium mine implies most FMPST members and other Native Americans approve. Like some of my fellow enrolled tribal members, I oppose the desecration of Thacker Pass. In my opinion, it will turn what is left of my ancestral homelands into a sacrifice zone for electric car batteries. My ancestral lands do not stop at the reservation's borders and I refuse to stand by and watch the tribe be pawns for the public relations department of Lithium Nevada.

Despite Lithium Nevada’s attempts to portray a good neighbor relationship with Native Americans by including a few Fort McDermitt tribal members in the late July ribbon-cutting ceremony for the Lithium Technical Development Center, the reality is much different. This mine is pitting tribal members against each other. Tribal Nations against Tribal Nations. Family members, lifelong friends and young adults are having to choose a side – for or against the mine — based on the propaganda of economic viability for one of the poorest Tribes in Nevada.

The fact that big businesses can destroy what little we have left of our history on the backs of our future generations with the façade of economic stability is inexcusable!

Lithium Nevada and the Bureau of Land Management (BLM) claim they consulted with the three closest tribes (the Fort McDermitt Paiute and Shoshone tribe, Summit Lake Paiute tribe, and the Winnemucca Indian Colony) prior to issuing the federal permit on January 15, 2021. In April of 2021, all three tribes sent letters to BLM saying no consultation ever took place.

In fact, my tribe, Fort McDermitt Paiute and Shoshone Tribe, wrote to BLM in May 2021 that BLM’s decision to destroy land and cultural resources sacred to Fort McDermitt for the Thacker Pass mine “was developed and approved absent of any Tribal input and government-to-government consultation…” they also wrote the plan to dispose of Native American cultural resources in Thacker Pass was “in no way reflective of the Tribal values we have on our cultural, historical, and religious resources at the Thacker Pass area, which are now being slated to be erased and destroyed – with BLM’s approval – by Lithium Nevada’s Project.”

In addition to Fort McDermitt, Summit Lake, and the Winnemucca Indian Colony, the Burns Paiute Tribe, Pyramid Lake Paiute Tribe, and Reno-Sparks Indian Colony also sent letters questioning BLM about the lack of tribal consultation on the Thacker Pass mine.

When BLM and Lithium Nevada refused to slow the project down so meaningful tribal consultation could occur, in July 2021, the Reno-Sparks Indian Colony and Burns Paiute Tribe filed lawsuits. In February 2022, RSIC and Burns Paiute Tribe were joined in court by the Winnemucca Indian Colony. For the record, six Nevada tribes have officially complained about BLM’s failure to consult with tribes about Thacker Pass. That includes my beloved FMPST. Despite their lack of formal opposition, they too disapproved.

The general public needs to understand how scary it can be for tribes. We remember the atrocities the American government committed against us all too well – including government agencies like BLM!

It must be known that not all tribes are fortunate to be staffed by professional administrators or politicians, but mostly by concerned community members simply trying to do what is best for their respective communities. Fighting federal projects like the Thacker Pass mine can be expensive and labor intensive for tribal councils, especially when those tribal councils are responsible for managing other day-to-day governmental affairs on the reservation. American law does not give tribes a right of consent over projects on public land. It only gives tribes a right to consultation.

So even when government agencies “consult” with tribes, those agencies are not required to follow any of the tribes’ recommendations, especially on important native issues like preserving historical and sacred sites. And because American legal protections for Native American sacred sites are so weak, many tribal councils ask: “What’s the point in forcing government agencies to listen when they don’t have to comply with our requests?”

Despite the impoverishment we live with on reservations, many of us, as our massacred ancestors did before us, still resist the expansion of mines on our traditional lands because we know mines pollute air, water, and soil, and kill tribal members with cancer. Mines also destroy our non-human kin including some of our most sacred brothers and sisters like the golden eagle and greater sage grouse.

‘Tokenism of the worst kind’

For many of us Native People, destroying the land that gives us and our unborn generations life, long after the mines, is one of the biggest modern-day atrocities committed upon us. I believe, for a few meager financial kickdowns from mining, corporations set to make billions off destroying our land is unacceptable and wrong!

Our oral history tells of the September 12, 1865 Thacker Pass massacre and is home to the final resting place of as many as 70 of my ancestors who were massacred by federal soldiers as part of what historians call the Snake War. The Snake War was fought between 1864 and 1868 by regional Native Americans including Paiutes and Shoshones against settlers and especially miners invading our lands. The Snake War was the bloodiest so-called “Indian War” fought by the American government west of the Mississippi.

Tribal members may not know their relatives back to that time. However, many still do. My history may not be known to my neighbor, and I may not know their history, but that is because our history, as native people, was handed down from generation to generation and from family to family as oral histories. What may be written in history books as “American History” does not always include the whole truth, but rather what can be corroborated with white settlers or those “historians” with academic degrees. It is generally biased and one-sided.

Do not be fooled by Lithium Nevada’s publicity tactics to date. My reservation is impoverished and desperate for economic opportunities. Many tribal members are forced to choose to work at the mines because they have no other options. Additionally, many leave the reservation to find their own economic permanency for their families.

A few promised buildings and a cultural center do not supersede the responsibility we have to our ancestors before us nor our obligation to our unborn after. The poverty that exists at Fort McDermitt might make it hard to blame my tribal council, but when you consider it, sacrificing the land for a little money is exactly how we have landed ourselves in the environmental predicament we are currently living through.

Are we willing to sacrifice sacred sites, health and internal balance for short-term economic gains while giant corporations create unmeasurable wealth, deplete resources, and leave our future generations to endure the disorder the Thacker Pass mine would leave behind? I will never believe this is the best method for greener living and nor do many other native people in our area. Digging the Thacker Pass open pit mine on sacred land will only open many doors for additional destruction on Mother Earth.

Our stories may be republished online or in print under Creative Commons license CC BY-NC-ND 4.0. We ask that you edit only for style or to shorten, provide proper attribution and link to our web site. Please see our republishing guidelines for use of photos and graphics.