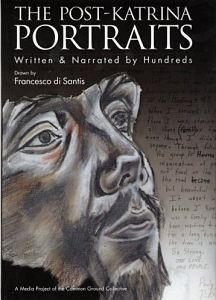 'Like a crayon in the sun,' through the floodwaters and tears, the people of New Orleans tell their stories

NEW ORLEANS -- Here is a book of the portraits and hand-written stories of those who survived Hurricane Katrina and the floodwaters of Apartheid, when America let democracy die.

Swept away in the floodwaters of Apartheid, were the babies, the old ones and sick ones.

There were other hurricanes, but none like this one. Now, a larger than life book, "The Post-Katrina Portraits, Written & Narrated by Hundreds," is a testament to genocide in America.

Portrait artist Francesco di Santis went to New Orleans and drew the faces of the people after Katrina. "For over a year, starting less than two weeks after Hurricane Katrina, I drew roughly two thousand portraits ..."

The stories, published with those portraits, are now a poignant revelation for humanity and a portrait of a people, who against all odds, did not lose their hope or love of humanity and are rising again to rebuild the great city of New Orleans. Their stories are both medicine and censored truth, voices concealed by the nightly news.

They tell of rescuing babies floating in plastic cartons, men floating on tires to rescue others, of the stench of bodies and yes, they tell, of when the levees were blown up to save the French Quarter.

"I was trying to save my adopted four-year-old niece in our house ... the house was collapsing all around me," Catherine Otelle remembers. "I head my niece crying inside. We finally found her crouched inside.

"She had a piece of wood going straight through the top of her head. She also had two broken collar bones. The hospital said we were lucky to survive. Now my four-year old niece has lost half her memory."

Some beat a hole in their roofs with their bare hands, and waited to be rescued on roofs. They waited and waited for the Red Cross, for the rescuers, that did not come.

One man remembers saving a woman hanging on to a gutter. "She told me to take the baby floating in a plastic container. I took the baby and she let go of the gutters and went underneath the water. We jumped in and got her out, altogether."

Altogether is the best word for how the people survived and the Common Ground Collective rose up to help the people.

That spirit is pervasive in the hand-written stories, as if drops of their souls had fallen into their pens' ink.

From the Ninth Ward, one woman says, "When I get settled into my new place, I'm going to find some way to help the New Orleans victims, to reach out and help other single parents get on their feet."

The stories are filled with neighbors cooking on the grill on their porches, piling the food on for the hungry in their neighborhoods. One person said when they saw snakes in the water, they knew they could have cooked them and people would have eaten them, because they had run out of food. Others could not believe that George Bush came here after Katrina.

For the local rescuers, relief came when people were found alive and at home. Julia describes seeing the words "We're home," written on one house. "It is the best feeling," she said.

For all of us who grew up in Louisiana and spent happy childhood days eating oyster poorboys and riding the ferries around New Orleans, this book is a tearful eulogy of a great people and a great city.

Randeep, breathing in mold and mopping up mud, remembers, "Yeah, sometimes I look at this ghost town and feel like I don't love anything. Sometimes I think it's so beautiful that my heart is gonna break forth like a New Orleans levee."

Krot says his heart has been broken before, but not like this, because the city looks like "the bottom of a pot of rice -- like a crayon that's been left in the sun."

Ultimately, they all ask who will rebuild the homes of the poor in New Orleans. Will the old jazz sounds be replaced with the voices of T-shirt vendors.

They all want to know: Will America hear their voices in the silence.

Still struggling to survive and rebuild, one survivor writes, "I weep because the toxic mold of corruption and injustice still remain and has begun to spread."

early Portrait-Stories (which indicated a tactic rather than a community
thus never found a home) from Jan 2005
http://dc.indymedia.org/newswire/display/115903/index.php