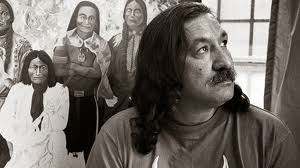 Greeting to you all.

My name is David Hill. I am of the Choctaw nation and an organizer with the American Indian Movement since 1972. My reason for this letter is to bring attention to the illegal, unjust incarceration of my fellow Sun Dancer, Leonard Peltier, of the Anishinabe nation, by the US government.

I will not go into all of the legalities and illegalities of his case because we probably would not have enough paper to cover them all. However there are key points of his illegal incarceration that require no legal training or expertise to understand.

Leonard Peltier and others were illegally and unjustifiably attacked June 26,1975 by a contingent of the Federal Bureau of Investigations. In the act of defending themselves, one Native American and two FBI agents were killed. The Native people were on their own land and not seeking confrontation. The Native people had been building cabins and other buildings as well as planting gardens. They were working toward developing programs to alleviate the many social ills caused by the wrongful policies in place by the US government toward Indigenous people. Our people did not provoke this attack and historically it is consistent with this government’s policies that has at times driven Indigenous groups to the point of extinction.
It is our understanding that you, the receivers of this letter might have some power of intervention, or promote some form of judicial change in the case of Leonard Peltier and other political prisoners who have suffered the same fate.

Bob Robideau and Dino Butler, who went on trial as a result of this same altercation were acquitted by reason of self-defense. Because of the persecution of Native people, Leonard Peltier was among others who had escaped to Canada. Otherwise, he would have been tried as a codefendant of the aforementioned other two men. Leonard was later arrested in Canada and the US Government used perjured testimony that they forcefully manufactured from Myrtle Poor Bear, a Native person, to illegally extradite Leonard Peltier from Canada.

This is all a matter of court record and not some form of conjecture. In Leonard’s ensuing trial, the US Government did everything it could to block Mr. Peltier's access to the same level of justice that Robideau and Butler, received in their trial, where they were acquitted. The US government sequestered jurors and led them to believe their lives were in jeopardy, thus tainting their impartiality in relationship to Leonard’s case. The US Government intimidated witnesses and made them fear for their lives and the lives of their families to illicit detrimental perjured testimony against Leonard Peltier. The US government withheld evidence that would have led to Leonard’s acquittal.

Prior to the trial the FBI met with the judge regarding Leonard’s case, which is considered legally inappropriate because it can and did prejudice the Judge towards Leonard Peltier. The place were Leonard was tried, Fargo ND is considered by Native people of the area, as well as other social justice groups, to be a racist environment. It is obvious given these circumstances and in some ways by the FBI’s own admissions, via their own internal memos, that they put the full weight of prosecution upon Leonard Peltier. They did not care who paid the price for their own transgressions against our people; as in the past, as well as now, seeking to exonerate themselves of the FBI’s illegal activities. In the totality of Indigenous versus non –Indigenous relations, this is not an isolated incident.

There are to date some 378 treaties ratified by the US Congress that are violated feloniously every day. There are millions of acres of land that are legally ours that we are denied access to. There are land leases that have expired that this US government has failed to honor and return the land to the people.

Bob Robideau and Dino Butler who went on trial before Leonard Peltier were allowed to present to the best of their ability the many circumstances that led to the confrontation that day. Because the jury was not sequestered, because the judge was not visited by the FBI and because their witnesses were not intimidated by the FBI, the truth for the most part was allowed to be told and the jury and judge were not only allowed to do what was just, but they were allowed to right what was wrong in the case of these two men.
Again, Robideau & Butler were acquitted by reason of self-defense. Had the judge and jury in Leonard’s case had access to the same level of information, Leonard Peltier would undoubtedly be a free man today.

Since Leonard’s incarceration all of these things written have been proven in court and have been recognized by the court as truth. Quoting one judge who spoke to us in seemingly hollow words, “Had these improprieties not happened, Leonard Peltier probably would have been acquitted.” However he went on further to say that he was not “totally convinced.” Considering the known racist atmosphere in North and South Dakota, he may have been correct. I am paraphrasing a quote by judge Haney of the Eight Circuit Court of Appeals who made the aforementioned statement. He further mentioned the FBI was equally responsible for the death of their two agents.

In short, every piece of evidence used to convict Leonard Peltier has been proven false in court. Many attorneys have advised us that in their view every legal appeal has been filed that would under normal circumstances exonerate Leonard Peltier in the same way his co-defendants, Dino Butler and Bob Robideau were exonerated in their trail prior to Leonard’s trial.

Under the criteria by which Mr. Butler & Robideau were tried, had the young Joe Stuntz, who was killed on that day lived and gone to trial he would have also been found innocent by reason of self-defense. This means the FBI was at fault and considering the fact that Joe Stuntz was killed in an act of self-defense, it is reasonable to say the FBI is guilty of murder. You would be hard pressed to find where any Euro-American has been prosecuted for the many thousands of Indian deaths that have occurred at their hands, yet when we as a people, under their same laws, defend ourselves there is rarely justice for our people.

We as an Indigenous people have always been forced to fight their fight under their rules. And when we win in their courts they either change the rules or blatantly ignore their laws. To this date Leonard has satisfied all the prerequisites for parole or release under judicial rules that Americans are expected to follow. However to date -35 years after the Oglala Incident, Leonard Peltier remains a political prisoner. Attorneys have told us, as well as private statements by various federal judges behind the scenes, that Leonard’s continued imprisonment is of a political nature, and so requires a political solution.

Leonard is 65 and presently denied adequate healthcare and is kept in a maximum security facility. Scientist say our bodies completely replace themselves every seven years. For Leonard that is five cellular lifetimes ago.

Leonard is not a threat to anyone’s freedom, anyone’s life, anyone’s property or in any way that would threaten the right to life and a pursuit of happiness by any just people.

If you talk to our opposition, they will have many statements to justify their behavior. However in cross-examination these statements do not withstand the light of day. There have been dozens of interventions filed with the UN council on human rights on Leonard’s behalf. Leonard Peltier has been nominated for the Nobel Peace Prize five times; he has received numerous humanitarian awards. He is an accomplished, world renowned artist. He is a father, a grand father and a great grandfather and considered an elder by his people, the Turtle Mountain Anishinabe. His people from Turtle Mountain Reserve have filed a request with the US to have him paroled or released to their custody.

There are no justifiable reasons under the auspices of humanitarianism, judicial ruling or federal law for Leonard Peltier to remain obviously, unequivocally a political prisoner. This is not an isolated event or case. There are other political prisoners within the US prison system. However, what makes Leonard’s case stand out above all others are the things mentioned in this letter which are a matter of court record and obvious to anyone who can look at the situation in an unbiased unprejudiced way, evidence of the illegal unjust imprisonment of Mr. Peltier.

I am not just representing personal views but the views, hopes and prayers of thousands of people worldwide who are familiar with this case. Our hopes and prayers are that you, in some way can bring relief to Leonard Peltier, his family and his people; and in doing so some way promote justice and peace for all people.

Thank you for your time and the work that you do. May we all live in harmony with the Creator, the Mother Earth, our fellow men, and respect our brother’s vision.

Most sincerely,
In the Spirit of doing what is right
Righting what is wrong

I think it is time for all us Natives of North America, even from Central and South America, to create a massive protest and rally for our the past, but most importantly, the current injustices to our people. Create the biggest Human Rights violation media coverage in this early century.

Man, I have yet to see one Native American president in this country, when we have been here since way before the white men came and polluted this land.

People call Obama's election historic, you want real History in the Making, elect one of us. I think for our part, it's time to start putting one of our own in state politics for starters, and then support him or her all the way to the White House...afterwards paint it Red and call it The Red House.

Sorry, a little perturbed by everything here.

Good statement and letter,David.
I have send a letter to Pr. Obama and send a mail to the minister of foreign affairs of China about Leonard Peltier,request for attention and adressing the injustice of this case.
Maybe it is an idea to send a letter to the international court in the hague?
I hope that Leonard will spend his last years with his people!

Leonard Peltier the first Indian up against the WASPs to actually leave his own words for us all, now followed by many an Indian chief - hail to thee too, David Hill. :-) - Well, written!

No one knows what Chief Seattle really said, and so with Sitting Bull and Crazy Horse. But with Leonard and all his Indian supporters and co-workers in the AIM the word has spread.

In Danish we talk about "hearing the story from the horse's own mouth" - and even if Leonard still sits in his cage, his story - and that of the AIM - will never go away, and should make way for a real change in the Sioux-Wars and in all wars that ethnic peoples have to fight to survive.

May my ancestral Gods go on in that battle; may Idun heal the wounds; may Forsete make peace and may mighty Tor hammer the unjust down to Hel and may she disolve them completely.