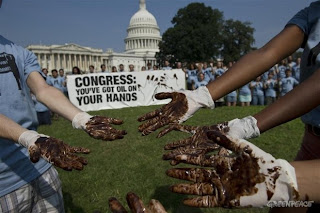 US Deadly Games: Arizona border agents, weapons and oil
By Brenda Norrell
Censored News
Photo: Mannie Garcia/Greenpeace
The deadly games of the United States are being exposed. Wikileaks reveals the Arizona National Guard in oil-rich Asia and the Center for Public Integrity exposes the ATF's flow of weapons to drug cartels across the US/Mexico border.
The US says it is taking the lead in exploiting Kazakhstan's rich oil reserves, according to a diplomatic cable released by Wikileaks. The US even has the Arizona National Guard over there keeping them safe by way of Centcom. Arizona got a chunk of money to keep things safe and tidy for ExxonMobil, Chevron, and ConocoPhillips in Kazakhstan.
Meanwhile, the Center for Public Integrity exposes the fact that ATF allowed weapons to cross the border into Mexico. Two of those weapons were found at the murder scene of Border Patrol agent Brian Terry, near Nogales, Arizona.
The ATF now admits that it allowed thousands of weapons across the border in a sting operation, "Fast and Furious," targeting narco traffickers.
A whistleblower told the Center for Public Integrity that some ATF agents opposed the operation because they knew what would happen when AK 47s were in the hands of drug runners.
“The decision -- part of a Phoenix-based operation code named 'Fast and Furious'-- was met by strong objections from some front-line agents who feared they were allowing weapons like AK-47s to ‘walk’ into the hands of drug lords and gun runners, internal agency memos show,” according to the Center’s article by John Solomon and David Heath and Gordon Witkin.

A second federal agent was murdered with a gun being tracked by ATF agents from north Texas in February. ICE agent Jaime Zapata was murdered in Mexico with a weapon smuggled into Mexico that ATF was following, according to the Dallas Morning News.

Senator Grassley presses for answers
Iowa Sen. Charles Grassley of the Senate Judiciary Committee is pressing for answers as to why weapons were allowed to pass through the border and why those weapons were found at the scene of Border Agent Brian Terry’s murder, north of Nogales, Arizona, on Dec. 14, 2010.
Sen. Grassley also questions a weapons smuggling operation that involved the mayor and chief of police in Columbus, New Mexico. Weapons sezied in Columbus have been linked to eight murders in Ciudad Juarez and Palomas. Palomas is across the border from Columbus, N.M.


In his March 24 statement, the senator asked Customs and Border Protection for information about reportedly stopping Blas Gutierrez and Miguel Carrillo near the Mexican border.
“The two were recently indicted as part of a gun trafficking operation involving the mayor of Columbus, New Mexico. Additionally, Grassley is asking about allegations that Customs and Border Protection stopped Jaime Avila, who was recently indicted as the straw purchaser of weapons found at the scene of Border Patrol Agent Brian Terry’s murder. In both instances, Border Patrol agents allegedly found the gun runners to be in possession of multiple weapons, but let the suspects proceed for unknown reasons.”

On March 16, Sen. Grassley wrote, “CBP officials allegedly stopped Jaime Avila near the border in the spring or summer of 2010. He allegedly had the two WASR-10 rifles in his possession that were later found at the scene of Agent Brian Terry’s murder, along with over thirty additional weapons.”

US soldiers eager to smuggle cocaine in southern Arizona

The exposure that the US allows weapons to cross the border into Mexico, follows sting operations exposing the role of US soldiers in drug running at the border.

The FBI halted a sting operation, Operation Lively Green, in 2006, because so many US soldiers in the Army, Marines and Airforce, wanted to smuggle cocaine from the border at Nogales to Phoenix. The nearly 100 people arrested included high school military recruiters in Tucson, a Nogales police officer and a prison guard. A similar sting operation found US soldiers stationed in Oklahoma ready and willing to smuggle cocaine from the US/Mexico border.

Back in Kazakhstan, the US continues its paternal and corporate role.

US Ambassador Richard Hoagland wrote this cable in February of 2010 that is marked "secret."

"U.S. and Kazakhstani strategic interests are largely aligned on the development of Kazakhstan's vast energy resources. Both sides agree that U.S. and other Western companies must continue playing a lead role in Kazakhstan's energy exploration and production projects, and that diversification of transport routes will bolster Kazakhstan's sovereignty and enable it to capture the maximum benefits of its energy and wealth."

"Kazakhstan produced 88 million tons of oil in 2009 (approximately 1.5 million barrels per day), and is expected to become one of the world's top ten crude exporters soon after 2015. While the country also has significant gas reserves (1.5 trillion cubic meters is a low-end estimate), current gas exports are very limited for now, in part because gas is being reinjected to maximize crude output. U.S. companies (ExxonMobil, Chevron, and ConocoPhillips) have significant ownership stakes in Kazakhstan's three major hydrocarbon projects, including Kashagan, the world,s largest oil field discovery since Alaska's North Slope," the cable states.

Arizona received $200,000 in funds for participation in the Kazakhstan border and security training partnership.

"This included exchange visits in Arizona and Kazakhstan of firefighting and 911 operations," the cable states.

Cheyenne River Lakota ICE agent, suicide or murder in Arizona?
Some stories, some lives do not go away. The life of Thomas DeRouchey, Cheyenne River Lakota, is one of those. Thomas was interim director of the ICE office in Phoenix. The official story is that he shot himself in the head and committed suicide while driving 80 miles an hour to a press conference in Tucson in 2004. It happened on the Interstate in Marana, just north of Tucson. (Marana was exposed by former CIA agents as a haven for black operations.) The question remains, was he shot or did he commit suicide, and why. Was he going to expose something about the border and immigration at that press conference in Tucson? -- Censored News
Posted by Censored News, publisher Brenda Norrell at March 29, 2011

We are being duped by the DOJ and ATF into accepting a premise that doesn't exist. The Mexican Drug Cartels are not obtaining their automatic AK-47's and rocket propelled grenades from US gunstores. Why would they bother to obtain less capable weapons and pay more for them? This "scandal" is accomplishing exactly what the adminisration wants, a link between the Mexican drug cartels and US guns. If a few people in the DOJ and ATF are sacrificed, it's a small price in their mind.