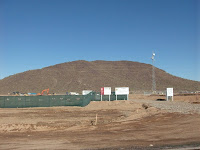 .
O'odham Ofelia Rivas responds to the new construction of Border Patrol Headquarters on the western boundary of the Tohono O'odham Nation at Why, near Ajo, Arizona, which will bring 360 Border Patrol agents and staff here. Meanwhile, a new bar (photo below) is opening in Why. Conveniently on the south end of Why is the site of a Sports Bar due to open on May 1, 2011. The owner is ETW Group, Inc. (602) 397-5748.
.
WHY, Arizona -- It is a worrisome thought, we already have border patrol that disregard the safety of community members as they speed through our community. They play armed soldiers all day with various toys including three wheel all terrain vehicles, dirt bikes, hummer vehicles, four-wheel high clearance trucks, helicopters and airplanes and horses, and spy cameras and listening and sensoring equipment, out on our sacred lands disregarding our relatives the plants and animals as well as our sacred offering sites and burial places. 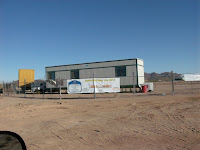 Now we will expect armed "sports bar" drunk border patrol tailgating the O'odham in their slow moving rez cars and drunk border patrols driving at 95 miles an hour on the highways and BIA roads. (New bar, photo on right)
The Tohono O'odham Nation seated on the east side of the reservation already neglect the safety of the O'odham members by allowing the border patrol and all other federal agents including non-O'odham tribal police free reign of the lands. The "sport bar" and the additional border patrol will quadruple the conditions for O'odham on the western side of the reservation.
With Tohono O'odham Nation elections coming up in May we wonder if it'll be the same old platform of the sellout political speak, our elders, our children, all together, our education, our Him'dag, despite the truth of the continued headlines of corruption and embezzling of tribal funds, from the district clerks and community representatives to housing authority directors and chief judges. Where is the real leadership that will support the O'odham way of life, that will get rid of out dated BIA schools and spend some of that annual bonus and salary money on providing our children with support of our language and protection of our lands and teaching our own history. Recently I was told about witnessing a non-O'odham sing in O'odham and speaking in O'odham. Meanwhile our own schools barely support one person to teach the language, much less have any O'odham teachers. The children in my village wait in the cold and heat at early morning hours to ride a two-hour bus ride to school because of poorly-funded BIA schools that have a lack of staff. The same school is forcing poor children out of the school system for non-compliance of a required dress code. The school buses, emergency vehicles and health transportation vehicles drive on a road that is just a big pothole. Many of us have learned to stay home during election time because we are witnesses to what is happening to our people.
--------------------------------------------------------------
In the news: Border Patrol breaks ground on new station in Why, AZ, Aug 19, 2010:
Tucson Sector Border Patrol leadership conducted a ground-breaking ceremony today in Why, Ariz., to begin construction on a new Ajo Border Patrol Station.
The 52,900 square-foot facility, scheduled for completion in July 2012, will accommodate more than 360 personnel and have room for future growth. It will draw power from the latest generation of solar panels. The station will also feature a Storm Water Pollution Prevention system, which ensures water that flows onto the facility will leave as clean as it was when it came into the facility.
The station's design is based on "economy of motion," following the agents' activities and natural movement to increase overall efficiency.
The Ajo Station, which was originally constructed in 1987, is located about 10 miles south of Ajo, Ariz., along State Route 85, and approximately 120 miles west of the Tucson Sector Headquarters. In its inception, the current facility was designed to accommodate 25 agents responsible for patrolling more than 7,000 square miles and 68 miles of the border between the United States and Mexico.