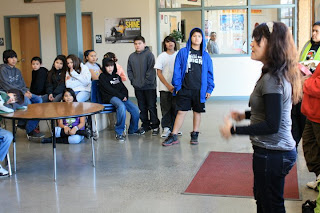 Ellyn Carlson is on the Longest Walk 3, northern route
Censored News
http://www.bsnorrell.blogspot.com
Photo: Ellyn speaks to Nez Perce students in Lapwai, Idaho/Photo Long Walk northern route
Ellyn tells Censored News
"I'm 20 years old, I come from Tacoma, Washington. This is my first Longest Walk participation. I was asked to join back around November by Treeza Fernandez during a Native American Student Union club meeting at Tacoma Community College. I honestly hadn't heard too much about it up until then. I was sponsored by Treeza. I am going in her place, as she was injured in the past and it has disallowed her to be able to join again.
I am Okanagan, Spokane, and San Poel. I was raised in the city, and have grown up immersed in the variety of different cultures within the Pacific Northwest. I went to Tacoma School of the Arts during my high school years, where it taught me the importance of keeping an open mind and learning more about worldly issues. I participated in this walk because I feel like there are often ignored issues within our country that are consistently being swept under rugs. I want to learn more about my heritage, I want to travel and become a better person; someone who is able to see with eyes unclouded. My own family and friends are not only affected by diabetes, but by other illnesses. I do this to pray for them. I sacrifice five months and miles for them.
Not only all of that, but the excitement of seeing where forces beyond my power are able to take me, it's become something I live by.
My perspective and outlook on life is changing. It's weird because somehow I feel like I expected this would happen, but I just wasn't sure of the impact. It's a little complicated. Being part of something like this just makes you feel more alive, you know?"
-- Ellyn Carlson, on the Longest Walk 3 in Missoula, Montana, March 6, 2011
at March 06, 2011