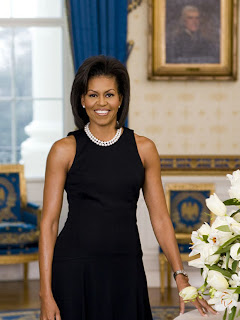 
First Lady Michelle Obama has selected women mentors for young girls in celebration of Women's History Month. While Native American novelist Louise Erdrich is on the list, the group is still top heavy with actresses and entertainers -- which makes its own statement about US women and their heroes.

There are also some troubling mentors selected by the First Lady, like Ambassador Nancy Brinker. Brinker boasts this credential: Former U.S. Chief of Protocol for President George W. Bush.

Now, would anyone really want to admit this, or be recognized for it?

If the First Lady wants to choose a mentor from the US military, instead of the Airforce selectee she chose, she could have selected Col. Ann Wright, who spoke out against the US invasion of Iraq, exposed US torture in Abu Ghraib, and was on a Gaza Free aid ship in the deadly flotilla.

There are too many Native women to name, but on this recommended list are the numerous Navajo, Hopi, Pueblo and other Native American environmental activists fighting toxic polluters, the US government, and at times their own US-controlled councils. There is another long list of Native women mentors, those struggling to halt violence against women.

Now, if you were asked to mentor First Lady Michelle Obama, what would be your advice to the First Lady?

The First Lady could organize a project to provide backpacks, school supplies and shoes to children who don't have any. Michelle Obama could organize food programs and housing for homeless children in America. She could organize summer food and activity programs for children and teens. She could ensure more domestic violence shelters for women and children.

She could leave the confines of the privileged, and walk down the backroads of the south and walk out across Indian land. She could find another America, one far from the mirage and glitter of Hollywood, and the stain and deception of politics and DC. The First Lady could make a new fashion statement, one that would endear her in history.

Rather than modeling the behavior of actresses, or encouraging aspirations in the US military and the killing of fellow human beings in wars for politics and profit, the First Lady could place before the youths of America real heroes who are winning in their own grassroots communities.
.
Chicago Sun-Times: Michelle Obama books stars to mentor, includes list of mentors:
http://blogs.suntimes.com/sweet/2011/03/michelle_obama_books_stars_for.html
.
Brenda Norrell, publisher of Censored News, brendanorrell@gmail.com
Posted by Censored News, publisher Brenda Norrell at March 29, 2011